Durga Puja 2018: Here's what the 10 weapons of the Goddess signify

The ten arms of Lord Durga symbolize that she protects her devotees from all directions namely the eight corners and from sky and earth. 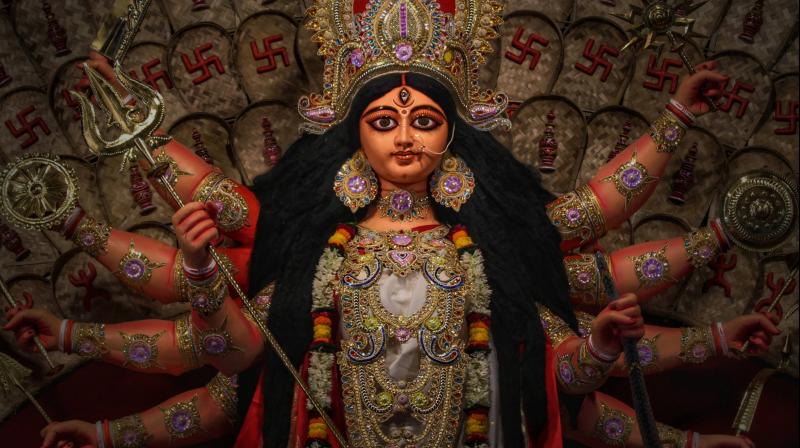 Durga Puja is on at full swing, as communities and neighbourhoods across India welcome the ten-armed-goddess home. One of the most attractive and popular forms of worship for Hindus,  Durga indicates the confluence of the power of all gods and goddesses. Lord Durga emanated in response to the prayers of humans and gods to put an end to the vicious and deadly demons. She waged a war against the evil demon lord Mahisasura and killed him, thus saving the world. Goddess Durga is ferocious to the demons and at the same time highly kind to her devotees.

The ten arms of Lord Durga symbolize that she protects her devotees from all directions namely the eight corners and from the sky and the earth.

The ten hands of Lord Durga hold in them a conch, discuss, lotus, sword, bow with arrow, trishul, mace, thunderbolt, snake and flame.

Here’s what each weapon symbolises:

Trishul: Gifted to Her by Lord Shiva, the trishul or the trident has three sharp edges meaning that humans are composed of three gunas or qualities namely Tamas (inactivity and lethargic tendency), Rajas (hyperactivity and desires) and Sattva (positivity and purity). As the trident pierces anything to death, the compassion of Mother Durga shall confer the wisdom necessary to conquer the three qualities and emerge victorious.

Conch: Symbol of the primordial sound called 'AUM' from which the entire creation emerged. It was gifted to Goddess Durga by Lord Varuna.

Discuss: Revolving around Durga's hands, it show that Durga is the centre of creation and all the universe revolves around her. It was a gift from Lord Vishnu.

Lotus: It stands for awakening of spiritual consciousness in a soul. Divine Mother will help her devotees to understand the transience of life and seek the ultimate truth. It was gifted by Lord Bramha.

Sword/ Kharga: Sword marks the sharpness of intellect enjoining humans to use the sense of discrimination to overcome their negativity.

Bow and arrow: The bow and arrow are the symbols of energy. It was gifted to the goddess by Lords Vayu and Surya.

Thunderbolt: This weapon symbolizes firmness of spirit. Praying to Mother Durga will help shatter the problems encountered in life without losing confidence. She empowers her devotee with unshaken confidence and will. It was gifted by Lord Indra.

Snake: Indicates the upward movement from the lower state of consciousness to the higher state of existence experiencing pure bliss.

Axe: Maa Durga received an axe and an armour from Lord Vishvakarma. It signifies no fear of consequences when fighting the evil.