Awards are given out in ten categories ranging from economics and anatomy to medicine and cognition. 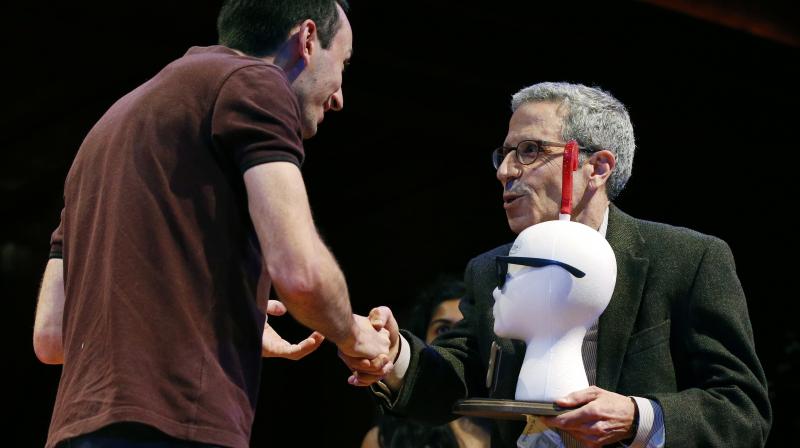 The Ig Nobel prize is an alternative award that honours research that 'first makes people laugh, then makes them think'.

The Ig Nobel for physics went to french researcher Marc-Antoine Fardin of the Université Paris Diderot, for a science paper questioning: "Can a Cat Be Both a Solid and a Liquid?"

In his acceptance speech, Fardin explained that a liquid could be defined as something which adapts its shape to the container it is in. Since cats manage to squeeze into narrow vases and glasses, and appear to expand to fill boxes and buckets, they could be seen as having liquid properties.

The study was a serious attempt to probe "some of the actual questions and problems that are studied in rheology, the study of the flow of matter," Fardin said.

"When I was asked if I was willing to accept the prize, the answer was easy," he added. "It might be cool to refuse a Nobel Prize but it's certainly uncool to refuse an Ig Nobel."

The awards were given out in ten categories ranging from economics and anatomy to medicine and cognition. They were presented at Harvard University by bemused laureates of the perhaps better-known Nobel Prize, which the Ig Nobels have spoofed since 1991, tongue firmly in cheek.

"The winners this year have truly earned their prizes," master of ceremonies Mark Abrahams, editor of The Annals of Improbable Research - a science humour magazine - told guests as he unveiled this year's statuette: a mannequin head with a red question mark perched on top.

Winners would also receive $10 trillion, the presenters announced - albeit of the Zimbabwean variety. That sum was worth about $8 (€6) when the bank note was issued in 2009.

A French team also took home the Ig Nobel for medicine, after researchers from the Sorbonne in Paris and the Université de Lyon used brain scans to look at which parts of the brain registered disgust in the presence of cheese.

Researchers carried out brain scans on both cheese-lovers and those who disliked the food, while they were exposed to cheesy scents and pictures - specifically of cheddar, goats’ cheese and gruyère - to determine the part of the brain where aversion to cheese originates.

Other award-winning studies examined why old men have big ears and whether vampire bats have developed a taste for human blood.

Matthew Rockloff and Nancy Greer won the Ig Nobel Economics Prize for their experiments to see how contact with a live crocodile affects a person's willingness to gamble.

The Ig Nobel peace prize was awarded to a team of Swiss scientists who discovered that playing the didgeridoo can help people stop snoring.

And a Spanish team scooped the prize in the obstetrics category for research showing that babies 'sing and dance' in the womb, when tunes were played to them through a 'musical tampon'.

The awards are not an attempt at ridiculing science, the Ig Nobel organisers said.