RSS plans to campaign and promote sari as ‘proper’ attire for Indian women. 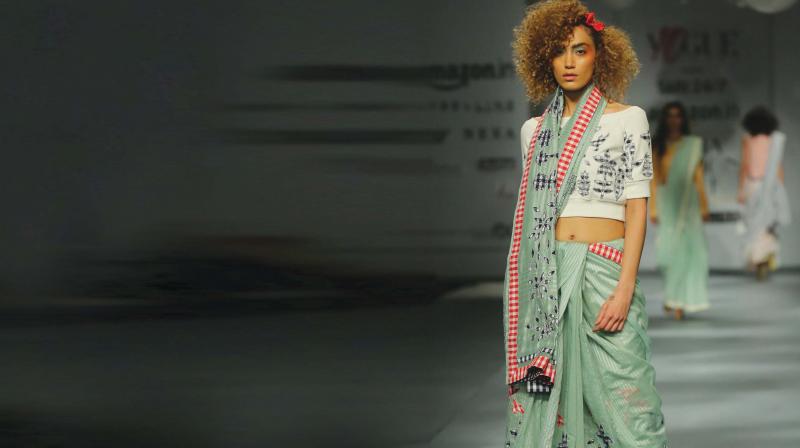 There’s a new set of guidelines on the “rightness” of being. RSS’ family counselling programme, that will run till 2019 general elections, will instruct people on what to eat, how to conduct themselves, how to celebrate birthdays, and also what to wear. Their pan-India campaign is promoting sari as the “proper attire” for women.

While the sari is much loved and a favourite of most Indian women from all walks of life, many are aghast at the concept of being told what to wear. They find this an infringement on their element of choice, and also curbing of their self-expression through attire.

Shalini Thackeray, General Secretary of Maharashtra Navnirman Sena, feels the sari doesn’t need any added boost since it already is the ‘national attire’ of Indian women. “That is why we have so many variations of sari in our diverse culture. This does not mean you take away women’s right to exercise their choice. Anyway, I think RSS should pay less attention to trivial issues like this. They should concentrate on more important issues impacting women and pertaining to health and hygiene. Making sanitary napkins an essential commodity so that it is available and affordable to women is one such major issue rather than concentrating on what they should wear,” she says.

Designer Nida Mahmood, who loves experimenting with sari designs and drapes, finds this disturbing and a matter of controlling people and their choices. She says, “Nobody can force someone to wear a sari or jeans or whatever. We live in a democratic country. We have the right to choose what we eat or wear. This is ridiculous. Such unnecessary forced rules and ideas give reasons to the fanatical segments of the society to spread hate. They should not be allowed to make such guidelines. Why are issues like security of women, or hunger and poverty not important to them? Why is wearing a sari so important? Any intelligent person will want the law makers to focus on real matters that need attention rather than wasting time and money over useless issues that are not even a matter of the slightest concern.”

Documentary filmmaker Nirmala Nair loves wearing saris but she is appalled at the idea of being instructed to do so. “If they actually carry out this campaign, I will stop wearing saris. How can anyone tell another what to wear? It is such a personal choice and it is something that absolutely does not affect anyone around you. What I wear is my own business and it’s preposterous that anyone should be telling anyone what he or she should be wearing. These are ways of controlling people. These are taking us back by many steps. The idea of choice is something that women had to work on and something like this is dangerous. It also reflects a larger systemic issue and is beyond just controlling women. We should all be very wary. A lot is happening today in the name of culture which actually has nothing to do with culture,” she says, adding, “All such directives infringe upon our right to be and these things can’t be taken lightly.”

However, not all feel brave enough to stand up against such regressive guidelines from those in positions of power. “I have started wearing sindoor out of fear these days. While visiting shops or travelling in local buses, I feel safer that way now. If a man can get lynched in a train because he was wearing a taqiyah and had a beard, anything is possible. It wasn’t like this before and I never felt my appearance could lead to any problems or mishaps. But I can’t imagine wearing a burkha these days. If tomorrow they force women to wear a sari, I will have to wear it. I can’t risk it,” says Sabeena Bano (name changed), who works as a house help in Delhi.

On the other hand, Sapna Khandelwal, founder of India Saree Challenge, does not agree that this is a control tactic, “If you request someone to wear a sari since it is a quintessential Indian attire, it would be very different from controlling someone. There are other religions that come out with diktats and we still give them a benefit of doubt. I don’t know why people get so upset when one talks about Hindutva. I work with an organisation that promotes wearing saris. It is such a beautiful, ancient and timeless garment. It has been talked about in the Vedas too. You obviously can’t shove it down someone’s throat but you can be a role model, so people start emulating you.”

She thinks that Indians do not take pride in their own attire, food and cultural habits. “We just want to follow the West blindly, and if we don’t change, our children will definitely not change in the future. Our civilisation is one of the most ancient in the world and sari, dhoti and lungi are very suitable for our climate. Also, it is a one-size-fits-all garment. We should support this. Kimono has died out in Japan and this should not happen to sari.”