One of the four women participants, Priyanka Bhat trained herself to be fit to beat the summer heat and ran for 151.6 kilometres. 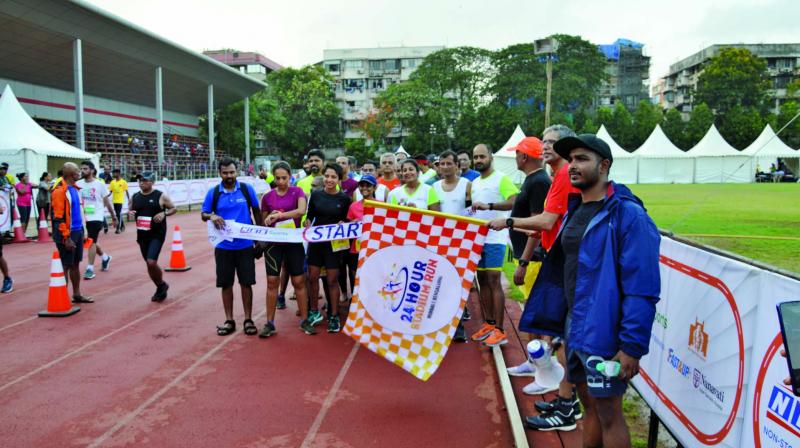 Participants gear up for the run

Thirty-six runners, including four women, began running on a rainy Saturday evening to complete the 24 hour-long stadium run marathon at the Mumbai University track. When the sun rose the next day, it witnessed half of the participants giving up on the track, and Narender Ram being declared the winner who ran 165.5 kilometers.

“I wanted to spend 24 hours on the track, that’s all I keep in mind and it helps me win,” says Narendra, who also won the race last year. “This year the weather is too humid, I ran and survived on lemon water,” he reveals.

The event, which is the qualifier for the IAU 24 Hour World Ultra Marathon Championship in France in October this year, intended to provide a platform that acts as a prelude to the world, where the participants have the opportunity to assess themselves before they finally hit the tracks in France. Organised by NEB Sports, the event is supported by the Athletic Federation of India and IDBI Federal Life insurance.

One of the four women participants, Priyanka Bhat trained herself to be fit to beat the summer heat and ran for 151.6 kilometres. However, she couldn’t manage to meet her target. “The weather has become drastically unbearable, but every run is a new experience and every experience counts to make you a better person,” says Priyanka, who reveals that she couldn’t even run for 500 meters when she started. “Every time when you run, you are not winning or finishing a race. Instead you are concurring yourself from within. When you start you don’t know whether you’ll be able to do it, but you just do it. It teaches me that there are no boundaries and when we push our boundaries we can make it,” she adds.

Another participant, Apeksha Shah, who ran for a maximum of 116.8 kilometres, also rued about the weather, claiming that it has ruined all the targets she set for herself. “The practice has gone for a toss and just kept with endurance. There is only pain all over the body. I knew I would make it to the target. It is about self-satisfaction and I know I am best. I feel if common people can do it, anyone can do it,” says Apeksha.

Much like the famous Le Mans auto race on France, this marathon requires the runners to be on the go for 24 hours with occasional stops. In a way, the race became a way to test the runners’ endurance as well as mental and physical abilities. “This is the ultimate test of a human being’s spirit and endurance, and we hope to see our stars qualifying for the final championship in France,” says Karthik, chief marketing officer, IDBI Federal Life Insurance.

In a carnival like atmosphere at the stadium, fans cheered on the runners and friends that certainly looked like helping the participants cover the maximum distance. “Normally top men clock close to 200 kilometres during this period, while the women touch about 170 kilometres,” Karthik shares.

Talking about the success of the event, race director Nagaraj Adiga says that there is an increasing interest for these races. “We are seeing a growing interest in the sport of ultra-running, with an increasing number of runners taking part in stadium runs across the country,” says Nagaraj. He further adds that these kinds of stadium runs help the dedicated ultra-runners train and qualify for international meets.

“We have tried providing the best possible support to the runners, and I am sure many of the participants would achieve their best-ever mileage in their future runs as well,” he concludes.