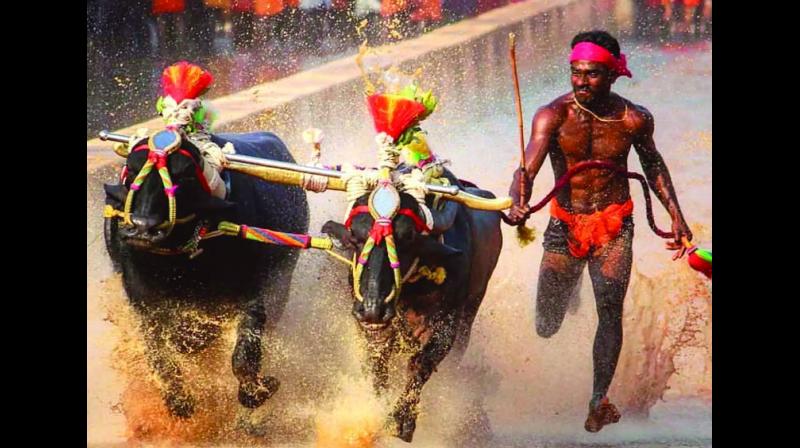 Srinivas Gowda shot to fame after his record-breaking run at a Kambala race in Karnataka .

Mangaluru: ‘Kambala’ (traditional buffalo race in coastal Karnataka) jockey, who sprinted like Usain Bolt to cover 142.5 meters in a mere 13.62 seconds, not only caused a flutter on social media but also caught eyes of many ministers including the Union youth affairs and sports minister Kiren Rijiju. Sports minister also invited the youth to SAI (Sports Authority of India) facility for felicitation on Tuesday.

Srinivas Gowda has set a record of his own in this Kambala season by winning 32 medals in 11 events! “Winning 32 medals in itself is something great, but this youth has created a record. In some events, he has won three medals in three different categories too. As the crown of his achievement, he has now covered the Kambala field in record time. He is a great dedicated Kambala jockey,” lauds Gunapal Kadamba, founder of Kambala Academy.

MP Shashi Tharoor too took to Twitter to post about Srinivasa Gowda, who is now being compared to Usain Bolt. “Faster Than Usain Bolt? Karnataka Man Running With Buffaloes Covers 100 Metres in Just 9.55 Seconds. I urge the Athletics Association of India to take this man under their wing & make an Olympic champion of him. Wonder how many hidden talents we have!” he wrote.

“India will rise and shine the Indic way! 100 mtrs in just 9.55 sec is an amazing feat. Proper training to Srinivas Gowda will definitely help him to make name for the country. My best wishes,” said P. Muralidhar Rao, National General Sec, BJP.

Minister Kiren Rijiju in his reply said, “Yes @PMuralidharRao Ji. Officials from SAI have contacted him. His rail ticket is done and he will reach SAI centre on Monday. I will ensure top national coaches to conduct his trials properly. We are team @narendramodi Ji and will do everything to identify sporting talents!”

Meanwhile, Srinivas Gowda seems optimistic about improving his record. “If I get a pair of buffalos that can run faster I want to run faster than this,” said Mr Gowda with a smile. Kadamba is happy as most of all these jockeys including Srinivas Gowda were trained at his Academy about nine years ago. “Mr Gowda was in the first batch of the trainees. The other fast runners were in the later batches,” says Mr Kadamba.

However, Kambala experts feel the sand track with water provides a good grip and also a good pair of buffalos inspire the jockeys to sprint thus running of Kambala jockeys cannot be compared to sprinters.

One of the arguments by the animal lovers who wanted a ban on Kambala was that the body structure of buffalo is not built for running. But the Kambala events have proved that they too can run at a record time.