A group of youngsters troubled by the deaths of manual scavengers have found a unique solution to the problem. 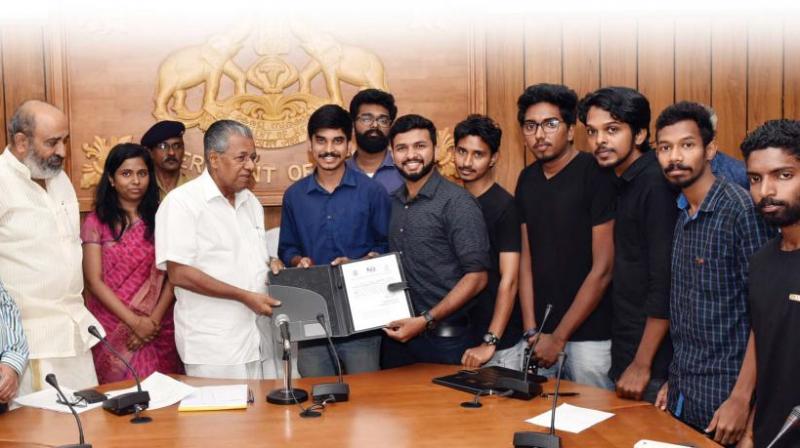 The world is moving towards a new dawn. A cleaner living space is what the current Union government has in mind. However, there is one section of the public that unfortunately bears the brunt of the very idea of clean India — Dalits, who belong to the Balmiki or Valmiki caste. The year 2018 kicked off with the news of seven manual scavengers’ death in a span of seven days.

One of the founders, Arun George, says, “We started our company as a students’ start-up in 2015. Our first project was a powered exoskeleton suit — a wearable robotic suit that allows for limb movement with increased strength and endurance. Our second project was developed to assist the physically challenged. This robotic suit could help them stand up, walk and even climb steps.” This technology got them selected for incubation under National Taipei University of Technology and the suit is currently being developed  in Taiwan.

Screen grab from the short movie The Manual Scavengers of Mumbai.

After their graduation, the team members went ahead to work with different companies. “Though we were working with other companies, we were always in touch, discussing various projects. That’s when we came across news regarding manhole scavenger deaths. We realised the gravity of the situation and decided to find a solution to this as a team. So we approached the Kerala Start-up Mission with this project. They gave us financial support for the first step. By then all of us had quit from our respective companies so that we could devote more time for this project. And so, we finally registered as a company.”

He adds, “A lot of research went into it. We found that despite the enactment of the Prohibition of Employment as Manual Scavengers and their Rehabilitation Act, 2013, manual scavenging was still very much in practice. The people involved in the work are not provided with any protective gears. One of the main reasons for deaths inside a manhole is the presence of poisonous gas. These scavengers are mostly half drunk and semi-naked when they lower themselves into these holes. This information made us determined to find a solution.” The team then conducted a survey in the Kochi and Thiruvananthapuram sewer divisions and found that manhole and sewer lines are jammed because of the household and hotel waste dumped into them. It was also found that no machine is currently present to remove this kind of waste material, which is why a human has to enter manually and clean the manhole.

“Thus we built the ‘Bandicoot’. Named after the rat that digs out the waste from holes and ground. That is exactly what the machine does. The first level of prototyping is complete, it is ready for real-time ground testing right now. The design has been verified.”

Explaining the features of the robot, Arun says, “It is user-friendly. We are planning to train those who were once involved in manual scavenging to use these machines. A man who knows how to operate a mobile phone can easily operate this machine. It weighs about 80 kg. The built is based on the standard size of a manhole. It can work in automated mode. It can also remove a manhole cover, which is a heavy task. The robot can be attached to the current existing technologies used in manhole cleaning, such as water jet positioning machine. The robot is also equipped with a bucket and a shovel with arm, which can rotate 360 degrees and collect hard waste and bring it up to the surface. It also comes with image processing for efficient functioning.”

They have also been approached by different authorities from other states. “Our aim is to make Kerala the first manual scavenging-free state in India.”