While women, feminists and women’s rights activists cried themselves hoarse, a bunch of the country’s men got onto an ego trip. 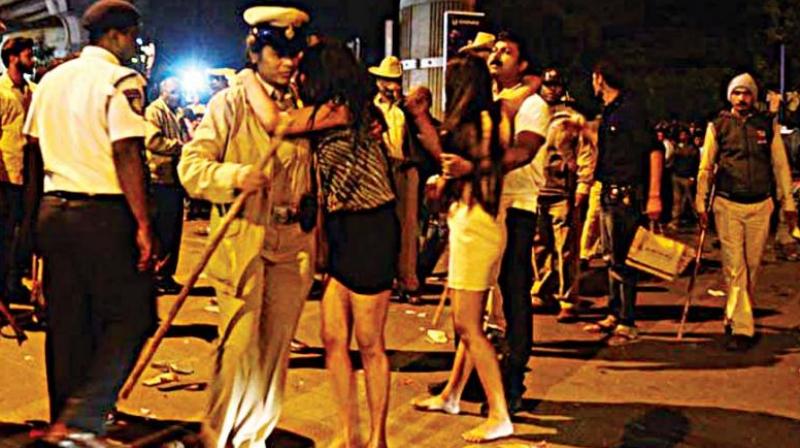 A young woman runs to a police officer for protection during the New Year’s Eve on Brigade Road.

When the rest of us were ringing in the New Year, girls in Bengaluru had a hard time. The mass molestation was reminiscent of the horrific images that came out of Tahrir Square, a good five years ago. Whether Cairo or Bengaluru, sexual violence seems to be a tape playing on loop. Of the many responses to the incident in Bengaluru, there was an incredibly alarming one that had all the trappings of encouragement for the offence couched within it: the “#NotAllMen” phenomenon.

While women, feminists and women’s rights activists cried themselves hoarse, a bunch of the country’s men got onto an ego trip. #NotAllMen became a social media chant to disinvest themselves of the crime. That #NotAllMen serves to respond to the ‘labelling’ of men as rapists shows how misguided it is when it comes to understanding the battle-cry against violence against women. No feminist worth her salt paints every man as a rapist or molester. The fact remains that we women know that there are men who are as angered, revolted and disgusted by incidents like those in Bengaluru, and by the callous commentary offered by the leadership that suggested that the molestation was a result of “aping the west.”.

But when you wave the #NotAllMen rhetoric in our face the moment a woman speaks of her own story of surviving molestation, the moment you shove that hashtag down our digital (and real) throats to drown out our voice, you only reassert the very prototype that we are taking down. The #NotAllMen hashtag is a product of the fragile ego of toxic masculinity that is chasing after hegemony to remain dominant.

Instead of being another idle bystander spewing the baseless rhetoric to defend yourself behind the hashtag, become an intervening bystander who will brook no nonsense. Instead, change the conversation. #YesAllMen need to be allies. #YesAllMen need to fight the patriarchy. Did you know, that as a private citizen, the Criminal Procedure Code, 1973, gives you the right to make an arrest of any person who commits a non-bailable and cognizable offence in front of you? All you need to do is to arrest the person and turn him in to the nearest police officer or a police station.  And forms of Gender-based violence such as causing hurt/grievous hurt (Sections 324-326, IPC), assault or use of criminal force to a woman (Section 354 IPC), and rape (Section 376) are all cognizable and non-bailable offences that you can make private arrests for.

Next time, don’t hide behind a hashtag. Shift your mindset, instead, and strive hard to make sure that there isn’t a next time.
The author is an Indian Women’s rights activist, a peace activist, artist, lawyer and writer