The print advertisement said “Join the movement to save the cow, our holy mother.” 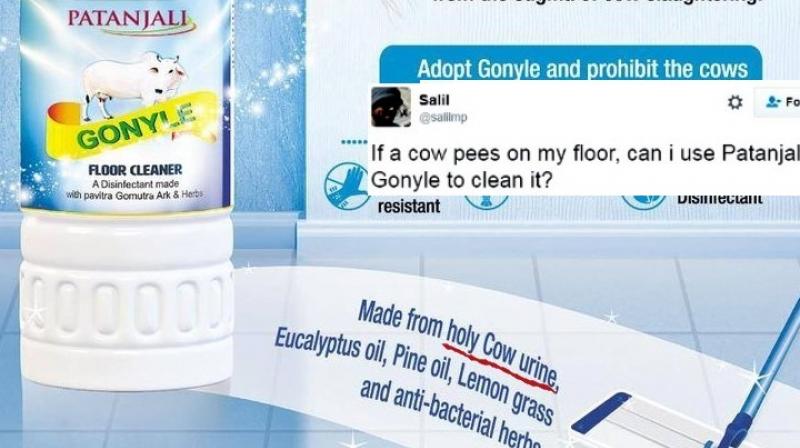 Baba Ramdev’s brand of products called Patanjali has had a phenomenal year after being called the biggest disruptive force in India's FMCG market which witnessed a growth of 146% in the fiscal year 2016.

After products like Patanjali noodles, jeans called Paridhaan and a line up of beauty products, Baba Ramdev introduced a disinfectant floor cleaner which is different because unlike other phenyl based products it uses cow urine and is aptly named Gonyle.

Struggling to understand how on earth such misleading and scientifically incorrect advertisements are allowed by the publisher. pic.twitter.com/b6zRmyxymd

A print ad by Patanjali Ayurveda asked people to stop punishing their hands with phenyl but it was the composition that caught everyone’s attention as it listed “holy cow urine” among others. The promotion for the product was directly linked to the volatile issue of cow slaughter as it read, “Join the movement to save the cow, our holy mother,” and added “Let’s take a small initiative to free out motherland from the stigma of cow slaughtering.

The advertisement was slammed for using religious sentiments to sell a product as many trolled it saying if their houses will start smelling like cow urine and others wondering how urine of any animal can be a disinfectant.

If a cow pees on my floor, can i use Patanjali Gonyle to clean it?

Go get your gonyle!
Or get a cow to pee over your floor #patanjali pic.twitter.com/9CPVIrzUol

Baba Ramdev discovered that cow shed India will lap up anything tagged with gau or its excretions. Hence.. patanjali success story.

Patanjali's blackmail to the nation. Buy our Phenyl made of Cow urine or live with more cow slaughter 😂 pic.twitter.com/nYq8FgpFHQ

While only time will tell Gonyle’s future in the market, the advertising campaign doesn’t seem to have gone down well with people, at least on the social media.