The artwork presented in this exhibition ignites a conversation between art and the environment. 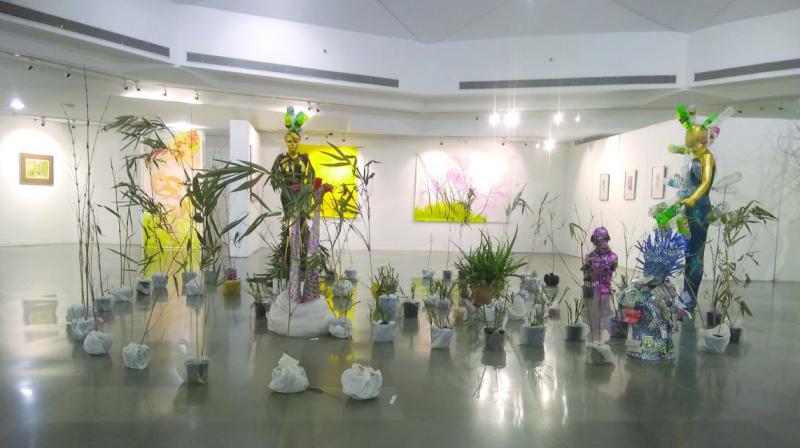 Art and the environment are symbiotic in nature — a fact that is well known to all. But what happens if there is no nature left to admire and the only thing visible to the naked eye are heaps of garbage?

Anu Jindal, in her art collection exhibited at the India International Centre, tries to draw the public’s attention towards the deteriorating conditions of the world around us. Her work involves a diverse portfolio of paintings, sculptures, installations, and pottery. Through her works, she puts forth the stark question, “Whither next?”

Her works revolve around the earth and the environment with a focus on the past and the present. But how? “I am not talking about the environment in the future —  I am questioning it. I am presenting a part of the situation that is around me,” she replies.

Her artwork involves an intense level of investigation and interpretation of her subjects. She explains, “A lot of research goes into it but the basic idea and concept comes from the heart.” For instance, she explains the work put behind her centrepiece, Labyrinth. “The concept of the labyrinth is very fascinating. I made it out of plants and covered it with plastic. Each plant was choked by the plastic and they were all wilting and rotting,” she adds.

Finding calm amid chaos is one of the qualities art possesses and Anu’s work is no different. She explains that the works have been divided into two categories: ‘nature beautiful’ for the paintings on the wall and ‘nature threatened’ installations and sculptures. She adds, “The paintings do have tranquillity because that is how I view nature. It was meant to be meditative.” Speaking about one of her paintings The Hymn of Creation that was inspired by the Rig Veda, she says, “I have repeated it six times because I do not want the viewer to read it but it is more like using it as a graphic symbol. It’s in a spiral that is deliberate because a spiral is open and expanding; the openness represents hope.”

She has used the colour intaglio technique which involves etching and is done on a zinc or copper plate. Then the areas are gouged out with the picture and acid and then the ink is rubbed on the depressed area that is then passed through an etching press and the ink is forced out of the depressed area. “In colour intaglio printmaking technique, you have to make deep grooves and these grooves are in deep layers and then you ink it in three different colours,” she explains and later calls it a “very complicated” technique.

While her works pose the question of ‘what next?’ for the environmental crisis, the answer she is hoping for is a positive one. The aim of the exhibition, she hopes will “encourage viewers to move in the right direction as everybody comes on board to solve the crisis.”