Alexander McCall Smith and Shashi Tharoor kick off the 10th edition of Tata Literature festival that will house over 150 writers from 14 countries. 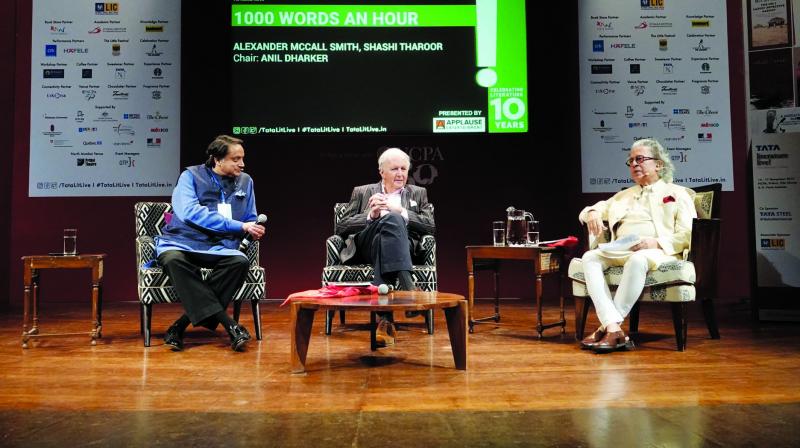 The 10th edition of the Tata Literature Festival is here, bringing an outpour of conversation around literature, current affairs, history, science, and the environment with bibliophiles and alike flocking the venu.

Taking the celebration a notch up, this year’s festival will have over 150 writers from around 14 countries gracing the stage, including Hindol Sengupta, Lisa Ray, Anthony Horowitz, William Dalrymple, Andrew Bovell, Tim Flannery, and Siobhan Parkinson, to name a few.

The four day festival began with ‘1000 Words an Hour’, with  British-Zimbabwean writer Alexander McCall Smith and politician-author Shashi Tharoor. The discussion instantly took off as moderator and festival director Anil Dharker mentioned that Smith writes a thousand words an hour. “I have a time table for writing and is practically a good thing to do,” said Smith.

To which Tharoor added that such a feat is unachievable for him, and he has to snatch time as he did for his initial books. “For me, to write during the day is not possible, as I can’t shut away from the people and my commitments. I write mostly during the night. I have to create time, so I sleep less and write more,” said the MP with a smile.

The writers further pondered over the magic of the human brain thatworks exceptionally well while asleep. “There have been times when I have dreamt of a scene and that has led to a book. With children’s books especially, some scenes come to me in my dreams. So often or not, bigger things trigger from a single picture,” Smith revealed.

However, the Tears of the Giraffe author finds penning fiction to be easier, while Tharoor is comfortable with non-fiction. Smith also finds that writing on a laptop is very different from putting pen to paper. “Writing on the laptop or dictating is a totally different experience. Writing with a pen is more exhausting than writing on a laptop,” he opined.

Recalling an incident when he sat in the parking lot with a pen and paper, scribbling his thoughts, Tharoor shares. "I had taken my wife for grocery shopping once, and the place had not vacant parking space. Forcing my wife to go and shop while I sat in the car and wrote,” he laughed.

With over 10 discussions, workshops and activities packed into one day, the festival in totality is a literature lover’s delight.
—Ongoing till November 17