Durga Puja here has a Chinese connection this time with culture and traditions of the two places blending into one. 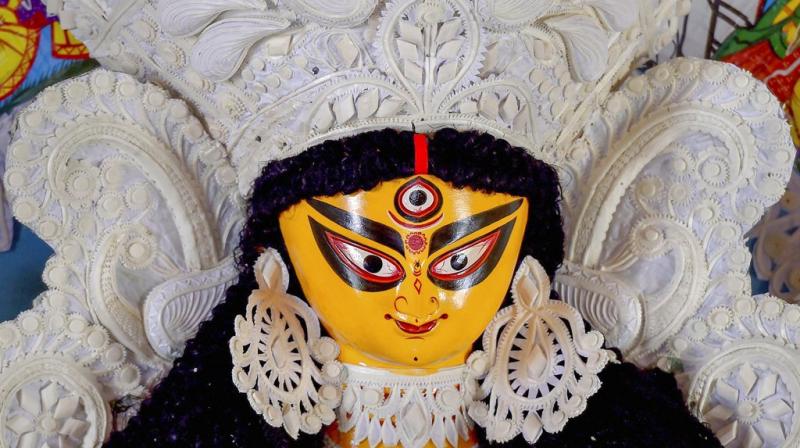 Five artisans were sent to Yunnan province by the puja committee of B J Block, Salt Lake, a few months ago to learn about the art, culture and way of life of the people there. (Representational Image/ PTI)

Kolkata: A piece of China has come alive in Kolkata with Durga Puja organizers in the Salt Lake area setting up a Yunnan-themed pandal, replete with dragon motifs, lanterns and a replica of Hulu (Chinese bottle gourd).

Durga Puja here has a Chinese connection this time with culture and traditions of the two places blending into one, Chinese Consul General to Kolkata Ma Zhanwu said Sunday.

Five artisans were sent to Yunnan province by the puja committee of B J Block, Salt Lake, a few months ago to learn about the art, culture and way of life of the people there.

The Chinese consulate helped the committee find a sponsor for the trip. "It feels good to see that a puja committee has installed a giant Hulu before the pagoda-shaped pandal, with the help of the local artisans. Much like Hulu, which signifies happiness and prosperity, the festival fills lives with joy," he said.

"Over the next five days, a troupe of 39 artistes from Yunnan will be performing at the B J block puja ground. They will perform side by side the Indian artistes," he said.

Governor K N Tripathi, who inaugurated the festival, said the cultural exchanges between the two countries will strengthen bilateral ties.

He also prayed for peace and welfare of the people in the city.

"On this occasion, we should take a pledge to remain united and work together for the betterment of society," Tripathi added.

Echoing similar sentiments, Zhanwu said he was looking forward to similar exchanges with the city on other occasions, too.

"In March, when the organisers approached us with the idea, we lapped it up instantly. We are happy to showcase Chinese culture at a festival like Durga puja in Bengal and look forward to more people-to-people exchanges in the coming years," he stated.

Asked about the state government's initiative to promote Durga Puja festival among foreign tourists, Zhanwu said, "I had the opportunity to attend the Red Road carnival, showcasing the diverse creativity surrounding the five-day festival. It was a unique and wonderful experience."

The state government, in 2016, decided to up the grandeur of Durga Puja celebrations in the city by a few notches by organising a massive farewell procession at Red Road every year before the immersion of the goddess.

The carnival gives people an opportunity to witness the best pujas in the city at one place.