None of the rights we enjoy are static: Arundhati Katju

The lawyer, on Independence Day, gave a talk at St Xavier’s College and spoke about the importance of freedom for the community. 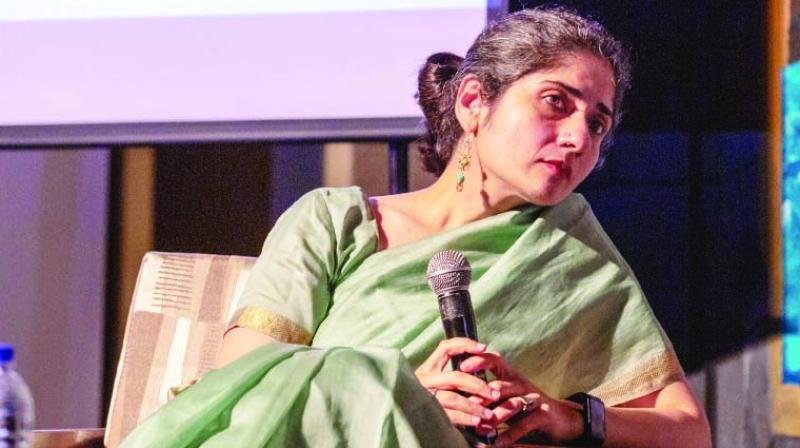 Arundhati Katju, one of the advocates responsible for the landmark LGBTQ rights win, explains the legalities surrounding Section 377 and how the fight is still not over.

In a landmark judgment in 2009, a Delhi high court bench decided to strike down section 377, saying it violates the fundamental rights to life, liberty, and equality as mentioned in the Indian constitution. But the high court’s decision was soon challenged in the Supreme Court. For the lawyers fighting the case, this loss was disheartening, but they re-strategised and presented their case again. “In 2016 Meneka, I, and a group of three other lawyers filed another case again challenging 377 and this time, we took LBGT people to court as petitioners. So before this, you did not actually have homosexuals speaking up and I think that’s really important to be heard whether it’s by the court or the media. So the idea behind this petition was to make sure we had them tell their stories in their own voices,” says Arundhati Katju, lawyer and member of LGBTQ community, who fought the legal battle, which eventually led to the striking down of Section 377.

The lawyer, on Independence Day, gave a talk at St Xavier’s College and spoke about the importance of freedom for the community. “I think this Independence Day is important and special to all of us because this is our first time as free and equal citizens,” she says.

Arundhati further reveals how the law that was passed down from the Victorian era, is not about carnal intercourse but concerns the right to citizenship. The right to citizenship that has been guaranteed to us under our constitution includes —  the right to equality, the right to dignity, the right to life, to free speech and expression, right to an association and to live and travel anywhere in India. “So section 377 was never about carnal intercourse. It was about the imitations that it placed on the LGBT community as citizens - the limitations against being able to express yourself freely, against being full and equal members of society.”

When they approached the court again in 2016, Arundhati and her team put forward three petitions, one of which was by 20 students and alumni of IITs across the country. Arundhati feels that it’s the youth  that will mold the country and establish it the way they aspire it to be. She says, “What was really striking was that the IITans had an aspiration of citizenship, they believed they could have a relationship, choose the profession they want, live where they wanted to right here in India. They didn't need to go abroad to live this life, they didn’t want to travel to metros to live this life, they wanted to do it wherever they were born and brought up, to live in their own communities, their home towns and to have this full right to citizenship.”

The five-lawyer team that drove the fight against the section had four women and Arundhati is proud to be a part of the team. She says, “I will point out that this was a team where there were more women. This was the legal profession and I’m sure it is usually not the case in many professions. We also made sure that we had amongst us gay lawyers who would be arguing this case and who would decide on the way this case would be conceptualised.”

Almost a year after the historic verdict, the change is pretty visible. But the LGBTQ community is still fighting for the rights that others enjoy. Arundhati feels that the journey till now was a long one and the next step will also take time. “The transformation after Sept 2018 has just been amazing. Whether it’s Dutee Chand coming out or the high court issuing orders to protect LGBT couples when they come to the court. I think these are things, which didn’t happen overnight. In many ways, there's a change that has to take place in the society and in us,” says the 37-year-old.

Reminiscing about the day when the historic decision was announced the lawyer says, “On 6 September 2018, when the verdict was due to come, we went to court very early in the morning, it was incredibly crowded, and we were very fortunate to be there to hear the court actually speak those words striking down Section 377.”