A brave new India: Out and about

Prime Minister Narender Modi has shown the world that while he’s India’s most powerful leader, he attaches no importance to materialistic things. 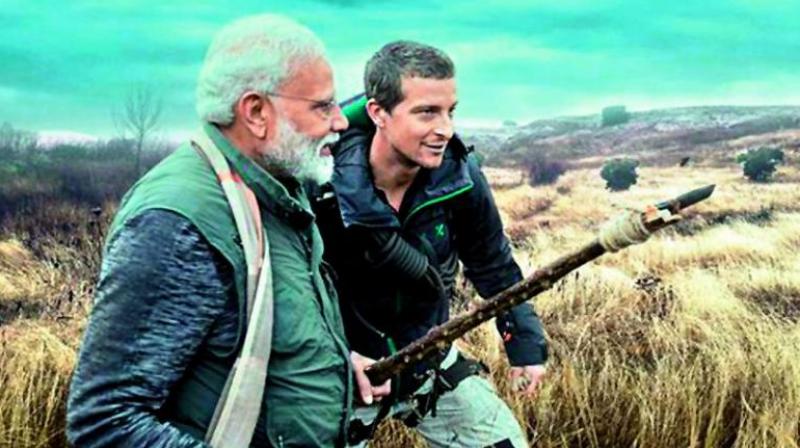 PM Modi appeared on an episode of Man Vs Wild with adventurist Bear Grylls.

Prime Minister Narendra Modi shared his first vacation in 18 years with the entire world when he recently participated in the TV show, Man Vs Wild with survivalist Bear Grylls. The pair enjoyed the scenic delights of the Jim Corbett National Park, with our PM showing us India’s scenic beauty at its best along with the joys of being in the wilderness.

For PM Modi this was an opportunity to talk about the importance of wildlife conservation and environmental change. It was great to see him open up about his childhood, surrounded by the wilderness. An anecdote that stood out was how he one day brought home a baby crocodile from the riverside as a pet, only to be asked to return it immediately to its home by his mother!

PM Modi also spoke about the simple joys of life like his father feeling thrilled when it rained in the village and sending relatives postcards informing them about the good showers. Now he understands how important it was for the village to get the rains. He also revealed the joys of living in the Himalayas surrounded by nature at its best and people who left zero carbon footprints.

The episode ended with Bear Grylls thanking PM Modi for taking part in the adventure. “He is cold, he is wet, but he is a hero. Well done,” Grylls said.  PM Modi replied, “It was a wonderful experience.”

It’s all about exploring the Earth
The rich kids of Instagram showing off their private jets, boats, shopping hauls and selfies with celebs are now crass and passé. It’s no longer about enjoying fancy hotels or Michelin star restaurants — heads of states, billionaires and true rock stars are instead taking in the wonders of the earth and her stunning environment.

The Crown Prince of Dubai, Sheikh Hamdan, considered to be one of the coolest guys on the planet, regularly shares his adventures of trekking in the hills of Scotland, afternoons at the stables in his London estate, enjoying the sights of the giraffe sanctuary in Dubai, spear fishing, diving around the world, skiing in Canada or playing with lions with his Instagram followers.

Similarly, Vladimir Putin can afford anything he wants, but he is most happy riding his horses shirtless, mountain skiing, playing ice hockey, hiking and being in touch with nature.

President Obama also chose to go hiking in the Kenai mountains of Alaska with Bear Grylls instead of lounging by some pool at a star hotel.

Today, with climate change, global warming and a total disregard to saving our natural resources, the clever and successful ones are enjoying what many don’t have the ability to get — the wonders of the earth!

Lawyer and former Miss India Vasuki explains, “Most people fancy themselves as travellers. But then again, there are people who travel and people who explore.” Recalling her own wondrous experiences, she says, “Seeing the polar bears in the Arctic and going diving in Raja Ampat in Indonesia (the Pacific Ocean) were two of my biggest highs. Both were equally magical. On the one hand, you have the beautiful bears which are so hard to spot and may even go extinct, while on the other, there’s a whole world underwater that most of us spend our entire lives never seeing or even knowing much about.” Shikha Kajaria, of Kajaria Tiles, also enjoys exploring the wild. “The most exciting thing we have done is going trekking with gorillas in Uganda. Being around them in their natural habitat was amazing,” says Shikha.

Interestingly, every year, the Kajarias go to the Masai Mara to see the migration. “We just love observing the animal kingdom, the food chain, their survival instincts and respect for each other’s territory without uttering a word,” she shares.