Gearing up on wheels

A team of college students have made their first electric vehicle and will be participating in the Formula Race Car Student competition. 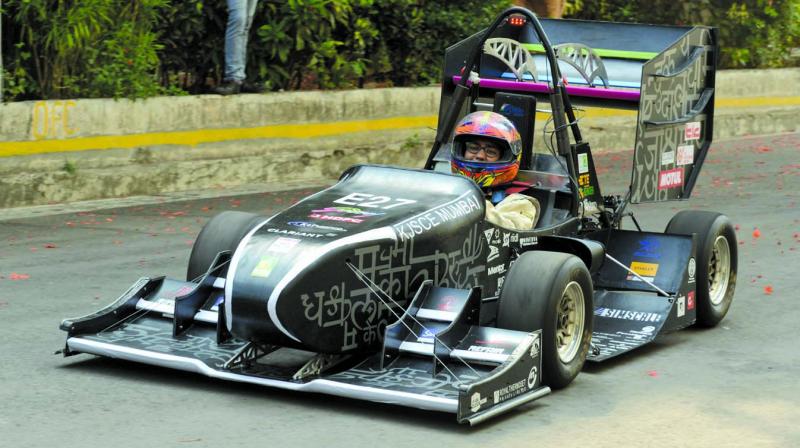 Fast cars have always been a fascination for automobile lovers. And when it comes to pushing the technology to its limits, Indians have never left any stone unturned. Contributing to the dynamic automobile world, a team of young engineers - Orion Racing India, who are the students of K.J Somaiya College of Engineering, have made their first electric vehicle called Artemis. The team comprising of 70 students including three girls are still into their academics, varying from first year to fourth year. Constructed with an aim of participating in the Formula Race Car Student competition that’s taking place from August 5 to 12 in Hockenheimring, Germany, and Formula Bharat in January 2020 in Coimbatore, the team has recently unveiled the car before starting their testing period.

“These kind of projects help you experience the real world. We learn the technical aspects in our academics, but taking decisions and using skills while keeping the team intact is what makes a difference,” says Shreya Rajmane, the captain of the team, who graduated this year from the college.

Working on the project for over 15 months, the team spent their time in three schedules – research and designing, development and manufacturing, followed by validation of the vehicle. Talking about the vehicle and its components, the captain informs that it is a single seater Formula 1 style racecar, which has EMRAX 228 motor installed. She further informs that the car weighs around 230 kg and the acceleration power is of 0 to 100kmph in 4.6 seconds. To assure the durability of the car, the team has installed a self-designed battery management system, incorporated carbon fibre pre-pregs for manufacturing bodyworks and aerodynamic elements, and used selective laser sintering technique to manufacture steering wheel.

The students have not just worked hard, but to use high-end technology, they also had to struggle to collect the funds amounting to `17 lakhs. “It was challenging, our marketing team had to be so strong. The major funds came from the college and the rest from different corporate houses. They helped either with funds or with services,” she shares.

Since it is an electric car, it runs without any consumption of fuels. It has no emissions and the noise created by the motor is much less than compared to a petrol engine. It takes three hours to charge the battery and once charged, the car can run for 60kms. “The entire industry is moving towards electrics, so it was the time for us also to move towards a greener future, and hence the idea of this electric car came,” says the captain. With an aim of making a reliable car and participating at the event titled as ‘Endurance’, the car is expected to run for 22 kilometres on a straight track. “Our aim was to complete that race without damaging the car. Safety was also a priority for us,” she explains.

Further, this car is a brainchild of these young innovators coming together and combining their expertise. Talking about her contribution, Sanjana Dhulla, who is one of the five drivers of the car, says, “I work on battery management system for designing and assuring that it works on the car. Initially, there were many issues but ultimately it went well. It was amazing.” She conquered three exams and an interview to become the wheelwoman of the vehicle.

The team will be competing with 120 teams from across the world, showcasing their design, engineering and project management skills, however, both the girls are confident to win the competition. “This is the first electric car and clearing it in one shot is our aim right now, we are preparing hard and we know we will win,” says Sanjana. Adding to her, the captain, Shreya, says, “As of now, we have targeted these two events and with the team like this, we are sure to win them both.”