Crack the whip on manspreading

The world is up in arms against manspreading and is finding ways to curb it. 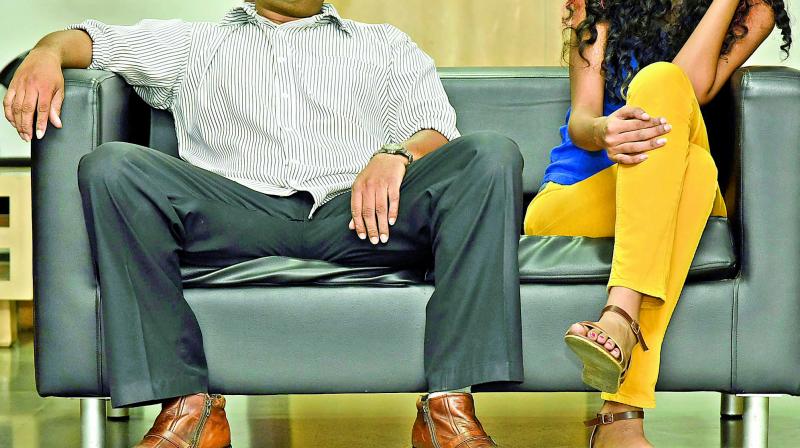 Manspreaders, as they are called, is an English term that describes the posture of men who open their legs too wide and take up neighbouring seats.

We all have, at least once, come across someone who occupies more space than he needs while travelling in public transport. Manspreaders, as they are called, is an English term that describes the posture of men who open their legs too wide and take up neighbouring seats.

To avoid this problem, the transport authorities of the Spanish capital, Madrid, have banned manspreading altogether! Madrid’s transport authorities in partnership with Madrid city council’s equality department and the Microrrelatos Feministas Collective, a women’s group that has launched an online petition for such signs to be installed, have installed anti-manspreading signs on the Madrid public transport network, to stop people from adopting a posture that makes others uncomfortable.

Similar initiatives have been launched around the world too. Three years ago, the New York subway system began a crackdown on the problem with a campaign.

Basic etiquette is lacking
It’s not only in buses and trains, some passengers fail to respect the boundaries of another’s seat even while flying and in a shared cab too. Carissa Martin, an analyst at IBM, says, “When my sister and I were travelling by plane, my sister was sitting at the window seat and a man had his legs apart really wide. She wanted to use the loo and he wouldn’t even move. Since that incident, we always make sure to get an aisle seat. It’s the thinking that needs to change.”

However, men are not the only ones to blame. Ayesha Farheen, a nutrition student who regularly travels by bus, says, “Even women do this — they sit as if there’s nobody sitting next to them.”

It’s annoying and gross sitting so close to someone. It’s not just about the manspreading; many people do not adhere to basic etiquette while using public transport. Says Kavyal Sedani, an etiquette expert, “To keep our volume down, respect others’ space, to keep our bags small and organised are some of the things people need to keep in mind while travelling. It’s common sense — we must keep others comfortable too in all situations. When people see Indians abroad, they tend to shy away because we are capable of being loud and obnoxious.”

So, will bringing in a rule regarding respecting a seat’s boundaries, bring in any change? Vishala Reddy, a businesswomen and frequent traveller, feels it may not help. “I travel a lot and have come across many who barge into others’ space. I feel that rules and regulations don’t work much in our country as many of us don’t adhere to them. There is no stringent authority that can look into such things. In many foreign countries, the person who breaks rules is either punished or fined. Whereas here, there are so many formalities to go through before the person can be punished. What is more important is to sensitise people about public manners and respecting
others.”

How to deal with Manspreading
Etiquette expert Nawaz Modi Singhania shares a few tips on how to tackle this problem. She says, “Manspreading is a new term for an old habit you see in public areas, where people sit with their legs or arms spread wide, taking up the seats next to them. This also inconveniences people who are standing. It gets intolerable, especially if the ones standing are either senior citizens, pregnant, carrying an infant, or with disabilities.” Don’t give up your grace by losing your cool in a public space — try this instead:

1 Start with giving the person at fault a stern look. That should make him/her uncomfortable.

2 If they don’t get the message, politely say, ‘Would you, please, make some room...’

3 If you need to get crisper, say, ‘Would you kindly move up, please?’ Make sure your tone is firm but not too loud.

4 If the person ignores it, take it up with the authorities like the conductor or ticket collector or any officer. Ask them to intervene.