To work or not work is no longer a choice, but we bring up girls with the idea that it is their decision to work or not. 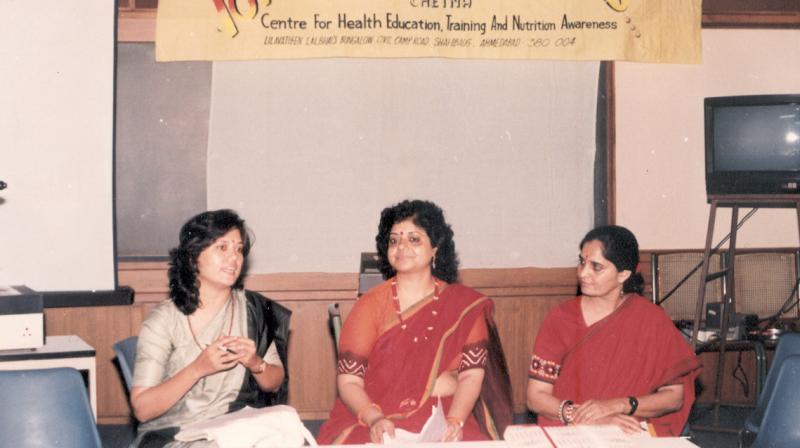 In the early ’80s when three young women, Indu Capoor, Pallavi Patel and Minaxi Shukla, all in their twenties, decided to set up a civil society organisation called Centre for Health, Education, Training and Nutrition Awareness (Chetna) in Ahmedabad, little did they realise that 35 years later it would become a model for engendering organisations.

The book, A shared destiny… My journey with Chetna, written by founder-director Ms Capoor is almost a personal diary blending her upbringing in a liberal, cultured IAS officer’s home with the travails of setting up an organisation focused on nutrition and women’s empowerment and the joy of seeing it blossom into one of the leading NGOs of not just Gujarat but the country. Chetna has been a strong voice on health and adolescent issues influencing policies both at the state and Centre. It combines grassroots work with advocacy and is heard with respect within the country and internationally.

The launch of the book saw a lively discussion on engendering organisational leadership by some of the country’s pioneers in NGO work and gender issues.

Anuradha Das Mathur, founding dean, the Vedica Scholars Programme for Women, said that a survey across business schools showed why women hold back. “Companies look at time as money. There is premium attached to availability”. They argue “productive women” are available only from 9 am to 6 pm but men, who may not be that productive, are available from 9 to 9. Further, workplaces favour certain women. They are not okay with demure behaviour. They want women to be clear and outcome-oriented. The attitudes sought after in the workplace are not acceptable in most social settings which see such women as bold or aggressive.

Having children makes women feel they are being judged. Working women with babies are not seen as an asset to the organisation. If the place of work is far off, the woman’s workday gets extended. The simple truth is companies prefer women who are available 24x7.

All these factors should be kept in mind while creating structures and strategies for working women, says Ms Mathur. While many corporates help women to fit into these structures, they do little to make the structures more gender sensitive. They need to encourage men to participate at home just like they encourage women in the workplace. “In short, companies need to wear the gender lens.” Till society changes, we have to be conscious of gender inequality, she says.

To work or not work is no longer a choice, but we bring-up girls with the idea that it is their decision to work or not, says Ms Mathur. There is a need to instil responsibility for themselves, to work just like all men have to!

At a Women’s Day meeting, Ms Mathur says, just 10 to 15 per cent of the 150 women said they were feminists, showing that feminism is still in a nascent stage. Pleading for a moderate view of feminism, she says it simply means women should be given a shot at all opportunities. Leaders have not learnt to use the gender lens and do not see the gender inequalities.

Ms Capoor points out that often women’s personalities are hidden behind that of their husbands. She recalls being introduced to a woman scientist by her husband — “she is a scientist, but she is my wife”. Very often women are made to feel “they are not worth it”. The book attempts to make young women more confident. If Ms Capoor could do it at 23, why should the 21st century woman hold back?

Rajesh Tandon, founder-director of Participative Research in Asia, who inspired writing the book, said many organisations had been set up but Chetna was different. Being conceived by three young women, Chetna realised that women’s struggles in the workplace were different and unique. At any time 60 to 70 per cent of Chetna’s staff is women and every section whether it is communication, research or finance and accounts is headed by women. The men who inspired and guided Chetna were feminists.

Mr Tandon points out cultures, systems and practices within organisations tend to remain gender blind and don’t practice the values they espouse in their work. That is why the Chetna story of practicing what it preached is important. The contrast is particularly stark in gender justice/women’s empowerment work.

“When an organisation intuitively practices what progressively becomes part of its identity, the work has wider impact and is recognised beyond the organisation. This is what Chetna has been able to do,” says Mr Tandon.

Though there is considerable writing about leadership, and management students are taught the attributes of charismatic leadership, engendering organisations need change leadership that has vision and energises others to make that vision happen. This means the discourse on leadership needs to be recalibrated. “Leaders are not what they do but what they can get others to do.”

Poonam Muttreja, executive director — Population Foundation of India, pointed out engendering civil society organisations was very different from the corporate sector. Women outnumber men and are in senior leadership positions in the social sector. Men also seem more comfortable in sharing power. Yet leadership continues to have a male connotation even in NGOs. Leadership enacted with masculinity (power, authority and knowledge) has greater value, she said. Female role models like Ela Bhatt, Medha Patkar and Saint Teresa are not recognised as leaders in social movements, she said.

Feminists tend to equate empowerment with leadership, she said. The feminist framework of leadership emphasises “power to”, “power over”, “power with” and “power within”. A lot of work in the feminist movement relates to belief in self-worth. Getting the disempowered to say their name on video is a huge push towards self-esteem and confidence. In the TV series Main kuch bhi kar sakti hoon, sponsored by PFI and watched by some 400 million viewers, when asked why they liked the programme, the women said they liked saying Main kuch bhi kar sakti hoon or I can do anything.

According to Ms Muttreja it is women’s care giving role which is the biggest impediment to their taking on leadership positions in organisations. Men have to take on this role if we want to engender organisations, she said. Care giving structures can be changed if we are willing to change patriarchy. “Women in India are ready for change, they need opportunities.”

Earlier, men had a problem working with and under women but that is no longer an issue, said Kartikeya Sarabhai. The conflict is between going to work and home. Women’s careers are not seen as important, specially in the support staff. Their families feel a job with regular pay is more important. “Passion or any other reason for working is not supported.”

Courses on engendering organisation, based on the book and experiences of the three women, are to be started by Chetna Outreach which Ms Capoor now heads.