Neither fish nor flesh

The BJP manifesto promises a Blue Revolution, however, city-based fishermen deem it an empty promise. 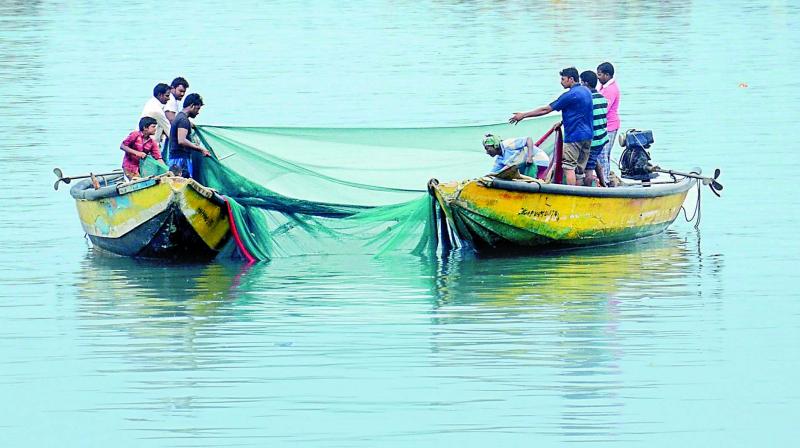 Although, closer to home, the community of small fishermen from the city deem the promises to hollow sounds coming from empty barrels.

As the ruling Bharatiya Janta Party (BJP) released its manifesto for the Lok Sabha elections last Monday, the party’s vision for the next five years has come under the scanner for various reasons. Among the plethora of promises mentioned in the 45-pages-long Sankalp Patra, in an overlooked section, the party has highlighted  ‘Blue Revolution’ — a promise to support small and traditional fishermen of the country. Although, closer to home, the community of small fishermen from the city deem the promises to hollow sounds coming from empty barrels.

In the current tenure, the national party BJP in alliance with local party Shiv Sena has formed the government with Devendra Fadnavis serving as the Chief Minister since 2014. But as Damodar Tandel, President of Akhil Maharashtra Machhimar Kriti Samiti (AMMKS) puts it, “Under this government, our community has faced some of the most severe problems and losses.” AMMKS is a body comprising of fishing communities from Mumbai, Thane, Palghar, Dahanu, Uttan and Vasai.

One wonders if the promise of launching a proposed policy called ‘Matsya Sampada Yojana’ which will allocate Rs 10,000 crore for logistical and infrastructural upgrades like ‘ice-boxes, cold storages, ice-plants etc. for small and traditional fishermen,’ are the latter’s need of the hour. “They are saying that they will provide us with such amenities, but when we don’t even have fish, why would we need the ice-boxes,” Damodar asks.

As someone who has been among the first to question the government policies and laws regarding the fishing communities in Maharashtra, Damodar puts forth several reasons for the depleting stock of local fishes. The increased use of LED fishing by bigger fishing companies  and fishermen not only deplete the stock for smaller fishermen but also tend to waste the other stock that they don’t require, he alleges. “All the fish in a three to four kilometre radius get attracted to the lights, and these big fishermen catch them. In fact, they are looking for fish that can be exported, and then throw away the rest. So the stock of the fish that is actually in demand by the Mumbai public is depleting,” he shares. Moreover, he also brings the curbing of seismic surveying by ONGC and plastic pollution in the sea are promises that the party should have included in the manifesto.

In addition to the depleting stock, the more pressing threat looming over fishing communities is the loss of their land, their koliwadas. “If you have to promise us anything, give us something, then give us our land back,” says Vishwanath who owns a small fishing business in Colaba. Across Mumbai, several of the fishermen live under the constant fear of their koliwadas getting roped in Slum Rehabilitation Authority (SRA) schemes. “They are trying to take away our koliwada lands. They are trying to change the Coastal Regulation Zone (CRZ) laws to lessen it from 500m and then bringing SRA schemes into the koliwadas,” reveals Damodar.

He explains that under the CRZ-2011, the building rights in existing fishing villages and goathans are permitted till a height of 9m, although the municipal corporation does not allow it, calling it Development Control (DC). He says, “In CRZ-2011 law, it’s allowed till 9m, but the municipality is not taking out GR on this. We met so many a times with with the authorities, but they don’t listen to it because they know that if we start developing our areas, they won’t be able to snatch away our land. They say they are making DC rule, but we don’t even need these rules. They are also trying to impose SRA schemes on us. Our houses are only more than 500 sq.ft, so why would we go for 350 sq.ft.?”

Moreover, the reclamation of the Coastal Road and the theme park of the Shivaji statue are the other two problematic issues for which the civic body does not do anything, says Damodar. In addition to the loss of the land, the reclamation will affect their business and cause more hazards in the monsoon.

As the department of fisheries come under the ministry of agriculture & farmers’ welfare, the fishing communities wonder why they proposed easy access to credit, but not loan waivers as promised to the farmers. “Like farmers, we had also asked for loan waivers. We met so many people, but we never received any answers,” says the president of the AMMKS. “They have not  done anything for the fishing community, just like they haven’t done anything about  the promised jobs. They don’t listen to our demands. We are the original citizens of the city and they don’t even respect that. All these promise of Blue Revolution are empty promises. It’s the same jumlebaazi,” Damodar signs off.