Inspired expressions from Indian performing arts and visual arts have kept alive and reinvented the heroines from our great epics. 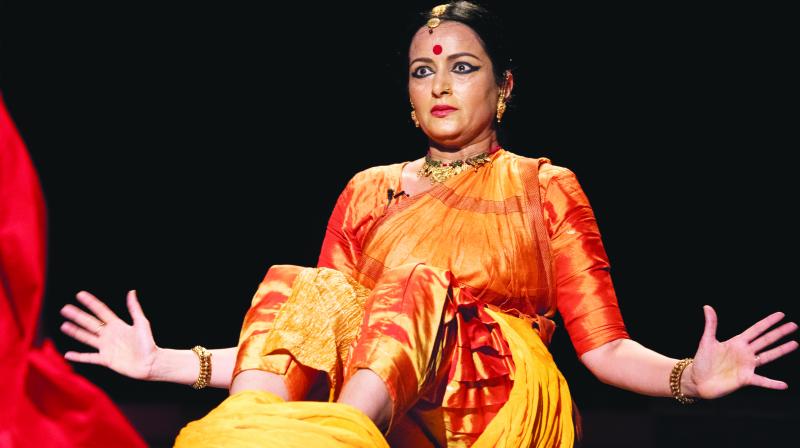 SPIC MACAY’s annual offer of classical music in Nehru Park, Delhi, sponsored by the Airports Authority of India, this year included dance too as part of the fare. Such events in the open gardens are undoubtedly one of the better ways of catching the attention of the general public — with many who are relaxing in the area and who accidentally or out of curiosity take in what is being performed, turning out to be, in later years, part of a discerning audience for good music. Even lying down on the grass, one can listen to music, though by including in the programme a visual art like dance which depends on visibility, SPIC MACAY was taking on a big task.

After a large gathering had taken in some vintage Hindustani classical vocals from the inimitable Pandit Jasraj, whose musical magic age cannot wither, to expect a general Delhi audience to take in an art form like Kutiyattam was equal to asking them to watch a Greek play. Somewhere SPIC MACAY’s enthusiasm seems to have got the better of the organisers. Kutiyattam even for a classical dance knowing public is difficult to digest. The extraordinary nature and complexity of this art form — where most of the time, a single actor on stage interprets the story as a third person, going back in time, and taking on multiple roles and performing in what is a highly stylised technique in an art form which today is the only remnant of ancient Sanskrit theatre miraculously surviving in Kerala. Comprising a slowly evolving mode of enactment, Kutiyattam demands deep concentration from the audience too. And since the performer is anchored to one small area on stage, the kind of audience involvement envisaged is too difficult to achieve in an open park — particularly since there is very little physical movement and covering of stage space in this highly internalised form — which is more like a meditation. With people walking constantly, crossing from one side to the other in front of the stage, totally unable to understand what was happening in the performance area, the artist Kapila Venu, trained under Ammannur Madhava Chakiyar and one of the best among performers in the field today, one feels, had a raw deal. Not even the percussive excellence on the Mizhavu, which provides a special throb to the performance, could command public attention enough to calm the atmosphere. One cannot help feeling that the artist herself should perhaps not have agreed to perform in this kind of space where unlike the closed auditorium, exquisite details of facial expression and telling eye movements get somehow dispersed in the vast open space. And beyond the carpeted space right in front of the stage where people were squatting, not even the audience on sofas beyond this could see the minute details of expression mapped out on the actor’s face. Saluting, and expressing gratitude to Vishnu for his incarnation as the koorma or tortoise, a newly choreographed episode on the Koormavatar by Kapila in consultation with her father and Kootiyattam actor G. Venu of Natana Kairali in Irinjalakuda of Kerala, was lost on the people. Perhaps a more familiar episode that general people are in tune with like Kapila Venu’s “Sita” with the dramatic power of what follows Lakshman’s deserting an unsuspecting Sita in the forest, as ordered by his brother Ram, would have evoked greater understanding in the audience. SPIC MACAY, which is doing yeoman service to the cause of art, in this instance had an error in judgement. An art form which has been recognised by the Unesco as a “masterpiece of the oral and intangible heritage of humanity” needs more careful handling.

Malavika Sarukkai’s fame always travels before her and the next evening, after listening to Pandit Chaurasia’s flute melody, a large and absorbed gathering for the riveting Bharatanatyam programme totally reaffirmed SPIC MACAY’s Dance in the Park. The greatness of the recital lay in the fact that instead of treating this as yet another of her innumerable recitals, Malavika had designed it for the space where it was presented. The area also lent itself to the dancer’s own strong feeling that man in nature and the bond therein is for her the theme — her dance is more concerned with — rather than the legacy of nayika to nayak themes.

Establishing a connection straight away with the audience was the entry with the dancer’s compelling presence, the strength and beauty of the sheer geometrical perfection of dance lines in Nrittyanjali as she moved to the “Jham takita” mnemonics with the assertive energy of S. Srilatha’s Nattuvangam, all blending to evoke a feel of bristling energy. The music for this was composed by Bhagyalakshmi and S. Murali. The next piece “Maricha Vadham”, done to verses of Tulsidas and set to an evocative ragamalika score by the late Seetarama Sharma, had the audience riveted by the performance, taking in the known episode from the Ramayana, which in the dance visualisation by Malavika, received unique treatment. Sita, during Ram’s sojourn in the forest, basking in the idyllic natural beauty of Chitrakoota with the lake and the blooming lotuses has never been happier, for here she has to herself a totally relaxed Ram unfettered by the cares of the kingdom. With chirping birds and bees humming (Nandini’s deft touches on the violin caught the droning sound to fine effect) — nature so full of bloom all round — seems too perfect. Ram has the instinctive feel that something very significant is about to happen. Suddenly, a stunning golden deer crossing before Sita’s eyes holds her gaze — mesmerised, she entreats Ram to catch the animal which is too fleet-footed for her to capture. The music changes to Hindolam and Ram’s chase of the fleeting deer as envisioned by the dancer is one of the most dramatic segments of the item, with the totally involved musicians contributing instrumental touches, punctuating the mood of suspense. And then the anti-climax when Ram’s arrow hits the target with the felled deer shouting out the name of Lakshman — and attaining moksha through Ram’s blessings.

The verdant Nehru Park provided the best environs for vasant or spring, and every small and big creature of nature, in poetic description, becomes part of the chariot which Kamadev arrives in. With his bow made of sugarcane, a bow-string of bees, and with the horse, the elephant, the ram, the bull and birds like the peacock, the krauncha and the cuckoo, as parts of the vehicle, the arrival of the God of love could not be more poetic — And in this ideal spring setting, Jayadeva’s Ashtapadi “Lalita Lavangalata” is interpreted with Radha watching the gay abandon of Krishna and the sporting Gopis. The dancer’s interpretation, rather than emphasising love in separation, shows the sakhi persuading Radha to join Krishna for this is the perfect time for love’s fulfilment.

Again in tune with the surroundings was the dancer’s “Salumarada Timakka” composed a few years ago when she came across a woman in rural Karnataka — Timmakka whose barren womb was the cause for deep sorrow, till one day, stirred by signs of new life stirring under the soil she had been watering, brought to her the wonder of seeing little shoots coming out of the earth, which she planted and watered to grow into tall trees. Earth’s fertility blossoming under her care vicariously made up for her empty womb in producing new life. Her life’s achievement in nurturing so many trees has now earned her a National Award too. The libretto by Mr Seshadri for this production with music by Meera Seshadri in Shubhapantuvarali during the first half with Timmakka lamenting her empty womb and with the second half full of hope and wonder set to Yamunakalyani, make for an extremely persuasive musical statement on greening our environs, and of all previous renditions by this dancer, this was particularly moving.

Malavika ended with the tillana in Mohana Kalyani, a composition of late Lalgudi Jayaraman, the violin maestro. With S. Srilata’s natuvangam, S. Jyotishmati providing sensitive vocal support, Nellai A. Balaji on mridangam and K.P. Nandi on the violin, Malavika had an excellent team of for musical support.

Dakshina gave a totally new twist to “Shoorpanakha — the Story only she Nose”. Lamenting the murder of husband Dushtabuddhi by her jealous brother Ravan, Shoorpanakha, remembering the ease with which Ram broke the bow which her brother Ravan failed to lift in Sita’s swayamwara, decides on the Ayodhya princes being part of her revenge plot. Deliberately trying to seduce Ram and Lakshman, till an angry Lakshman mutilates her face, she goes crying to Ravan for revenge — resulting in the abduction of Sita and the war in which Ravan is killed. Her purpose fulfilled, Shoorpanakha congratulates herself that apart from pulling off a who done it through a perfect murder, fingers are pointing at Ram and Lakshman for playing with a woman’s feelings. Dakshina’s compositional flair based on excellent music composed by S. Vasudevan in ragas like Suratti, Hamsadhwani, Hindolam, Reetigowla and Bindumalini, combined presentational aplomb in her bold expressions, agile dancing with forceful teermanams, and costuming sense with luxuriant natural hair left hanging. And what powerfully suggestive stage installations by Himamshu Srivastava!

Very fittingly, Vidya Subramaniam’s non-glamorous Draupadi in saffron saree, appearing on stage with the high-kicking left leg, was out-of –the-ordinary. The title inspired by Maya Angelou’s poem Still I Rise, portrayed a strong woman dealt a raw deal in life by destiny. A fine idea in the danced version fell short, thanks to the sound tape with nondescript music (not withstanding a very famous composer) and a too loud theatre voice for introducing each of very brief appearances and exits based on multi-lingual soliloquy, with no chance for the build up of presence and a strong message — till the absolute end when Draupadi wonders why due to no fault of hers, marrying five husbands made her less virtuous! Would she be called a widow if one had died? She blames Gandhari that after having mothered 100 sons, she did not rise to her help in court when her sons went berserk. As for Yudhishtira, how did he after losing himself ,stake her in a game of dice? Saree wrapped round legs suggesting atrocities by men Draupadi reminds the audience of Nirbhaya?  But for today’s Draupadi there is no Krishna coming to the rescue. “I am here and not gone”. For a fine Bharatanatyam soloist like Vidya, despite the pungent end, the production fell far below expectations.