Life   More Features  15 Apr 2019  Feeling left out for not watching 'Game of Thrones' as yet?
Life, More Features

Feeling left out for not watching 'Game of Thrones' as yet?

It’s not too late to dive into ‘Game of Thrones,’ so here’s a quick recap of all you need to know to get started. 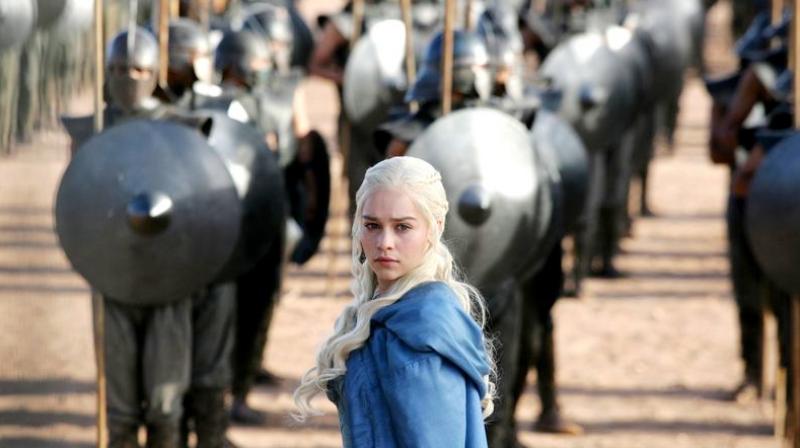 Emilia Clarke as Daenerys, the only surviving member of the Targaryen family. (Photo: AP)

For seven seasons, you’ve ignored the lure of ‘Game of Thrones.’ The multiple awards didn’t draw you in. Your friends debating plot twists each Sunday on social media didn’t move you. The “Is Jon Snow really dead?” storyline wasn’t enough; not even the “Hold the door!” memes sparked enough interest.

But now, here you are, with the final season days away from kicking off, finally ready to delve in. Since you don’t have the time (or probably the stamina) to binge watch the past 67 episodes, here’s what you need to know to follow along with a modicum of understanding when the eighth season gets underway on HBO on Sunday.

‘Game of Thrones’ is a family affair, with several Great Houses that love, fight, plot and conspire for the Iron Throne, the ultimate power in Westeros. (Some love a little more than normal – the twisted affair between siblings Jaime and Cersei Lannister, for example). Three families at the heart of the story are:

The series began with Ned Stark, Warden of the North, at his home, Winterfell. He and his family wife Catelyn; sons Robb, Rickon and Bran; daughters Sansa and Arya; and oh yeah, the illegitimate offspring, Jon Snow  are living relatively quietly until they receive a visit from Ned’s old friend Robert Baratheon, now the king. Reluctantly, Ned agrees to become the hand of the king, kind of a ceremonial vice president position and travels south with some of his family. Things don’t go so well, he loses his head and the family is scattered. Shamed by his origins, Jon Snow joins and soon becomes a leader of the Night’s Watch.

Think of them as a combination of border patrol agents and celibate monks who stand guard at the Wall, which runs across the north of Westeros and keeps out the Wildlings, a fierce nation that doesn’t recognise the kings and princes of Westeros. Eventually though, the Night’s Watch and the Wildlings join forces against something far more terrifying – the Night King and his White Walkers, an army of the frozen undead, who when last seen had come crashing through the Wall.

By season eight, the other surviving Starks are Sansa, who went from horrible engagement to horrendous marriages to, now, becoming the mistress of Winterfell; Arya, who survived on the run, picking up some deadly skills along the way; and a disabled Bran, a man with a mystical vision.

The gold-obsessed family you love to hate. Twins Cersei and Jamie have been lovers since they were kids, becoming the not-so proud parents of Joffrey, who was briefly king, and two others, none of whom survived the show’s run. Cersei was married to the king, Robert Baratheon, and has remained in charge in the capital, King’s Landing.

The youngest and wittiest Lannister sibling, Tyrion, a dwarf, is the black sheep of the family. Seems his sister still blames him for the death of their mother while giving birth to him. After killing his father and fleeing Kings Landing, Tyrion finds a second act as hand to a different queen, Daenerys.

The Targaryens ruled Westeros before Robert Baratheon, Ned Stark and others brought them down. Daenerys, the only surviving member of the family, more or less, was sold into marriage with Dothraki leader Khal Drogo (later killed). She receives an interesting wedding gift: three dragon eggs. Before they hatched, making her the “Mother of Dragons,” the Dothraki queen learned that she can stand in the fire, without getting burned.

Daenerys decides to sail across the Narrow Sea and reclaim the Iron Throne held by her father, the mad king. He too had a penchant for fire, though it was more about burning people alive. Her brother Rhaegar is also crucial to the story for allegedly kidnapping Ned Stark’s sister, Lyanna, before he and his family were killed.

George R R Martin, the creator of the book series on which the show is based, has created a world that’s make-believe but feels somewhat real. It’s like a mash-up of feudal England and Tolkien’s Middle Earth with a healthy dose of sex, violence, conniving, power-grabbing, more sex, more violence and lots of full-frontal nudity.

Some other prominent places:

Dragonstone: Former home of House Targaryen, an island where the dragons of the past resided with the family.

Essos: A continent lying across the Narrow Sea from Westeros. It’s where Daenerys was hiding in the beginning and where the horse-loving Dothraki roam.

Braavos: A free city in Essos, home to the Iron Bank, to which the Lannisters owe some gold. Also home to the Faceless, religious types and assassins who worship the Many-Faced God of death and collect faces of the dead from all over the world. Arya came up through the ranks here.

Iron Islands: Home to a naval fleet of warriors led by House Greyjoy, whose heir, Theon Greyjoy, was a ward of the Starks and has been through some rough times since then.

As the final season approaches, the three houses have pledged to unite their armies along with the Wildlings to fight their common enemy – the White Walkers. The zombie-like creatures have managed to break through the Wall and they have now included one of Daenerys’ dragons among their ranks.