An exclusive interview with RCB all-rounder Aniruddha Joshi who candidly talks about his struggles and the road to the IPL. 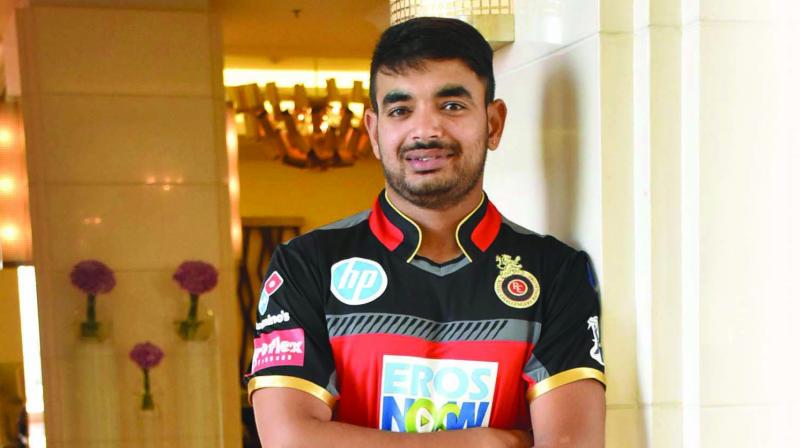 He is one of the two players from Karnataka to have made it into team Royal Challengers Bangalore (RCB), and he’s predictably thrilled about it. Meet Aniruddha Joshi, a small-town lad from Gadag, who’s worked painstakingly to make his way into the IPL. We caught up with the all-rounder who got candid about his struggles and more…

“It feels really good to be playing for RCB. When the auction was happening, Pavan (Deshpande) and I were giving our officers’ exam for SBI. When I got done with the exam, I had 134 Whatsapp messages and 40 missed calls! My mom called me and told me that I’d been picked for RCB, and honestly, it felt so surreal that I didn’t know how to react.  I felt on top of the world — to be sharing dressing rooms with players like Virat Kohli and ABD is something else,” smiles Aniruddha.

How has the IPL journey been so far for him? “We had a preparatory camp before the tournament. Daniel Vettori and Ashish Nehra have been guiding us and captain Kohli has been really nice. I’m a huge admirer of his — he was so positive during and after the first game — it’s been amazing to be around him,” reveals Aniruddha, who’s also been interacting with international players like Moeen Ali, Colin de Grandhomme and Chris Woakes. “They are all such kind-hearted people. It was so nice speaking to Moeen as he talked to me in Hindi too! I haven’t interacted with the legendary ABD yet, I’ve only just met him,” he adds.

As he takes us back to his early days, he reveals that with Sunil Joshi as his uncle, it was obvious that his family was a cricket-loving one. “When I was 14, I started playing cricket with my father as my first coach. After that, I played club matches in Gadag, a place with hardly any facilities. So, I went to the academy in Hubli for want of better facilities. I represented the Dharwad Zone at 17, and that year, I was chosen to play for Karnataka U-17. I came here for the U-19 and got a job in DTDC as a guest player where I played many matches and scored runs and later, I got a job in SBM (now SBI). When I moved to B’luru, my mentor Santosh Menon helped me a lot,” he shares.

Having toiled quite a bit to get here, the cricketer reveals that he used to take the train from Gadag to the KSCA Academy in Hubli every day. “I’d reach there by 6.30 am. I’d finish practice and catch the train at 10.30 and post 11, I’d go to school. It’s been a tough journey and now, my hard work is paying off.”

As for his uncle, Aniruddha reveals that Sunil has been a constant source of support. “He’s a big role model to me. Whenever, I have asked anything from him, he has taken me to his house and helped me. Even now, I take advice from him and he calls me everyday to check on my preparation. For the past few years, he’s been telling me that my time will come if I perform well,” he says.

While RCB lost their opening game against KKR, Aniruddha isn’t worried. “This is my debut IPL. I’ve learnt so many things. In fact, I wasn’t even on Instagram — Pavan made me join the platform recently,” he laughs.