Smriti Irani in fact, urged the Congress-led UPA government to hold a special Parliament session after the 2012 Delhi rape case. 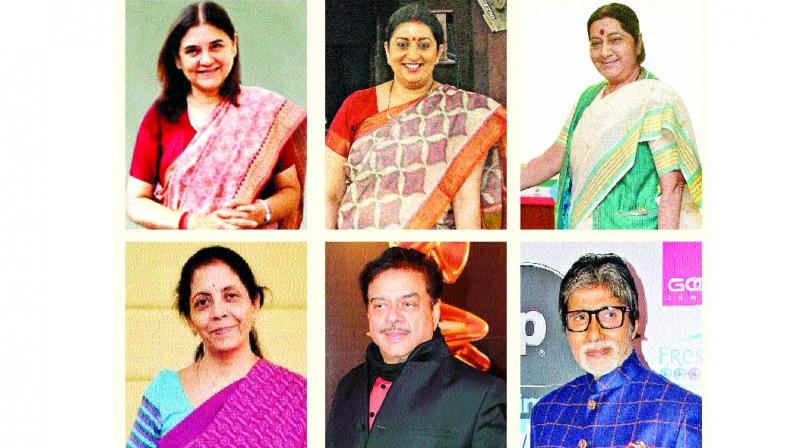 Surprisingly, the otherwise vocal women ministers in the BJP, haven’t strongly condemned the Kathua and Unnao rape cases. Same can be said about Amitabh Bachchan, Shatrughan Sinha, actor turned politician Pawan Kalyan and many other business bigwigs who are active on social media with their posts.

Millions of Indians, regardless of being Hindu or Muslim, are angry and heartbroken at the gruesome Kathua and Unnao rape cases. But the much-needed voices of powerful, vocal women ministers like Sushma Swaraj, Smriti Irani, Maneka Gandhi and Nirmala Sitaraman are notably feeble or absent. Celebs like Amitabh Bachchan, Shatrughan Sinha, business bigwigs and the likes who tweet their opinion on just about every issue, are mum this time.

Finally, the Prime Minister spoke about the Kathua-Unnao case after seeing India’s outrage. What’s worse is that not a single woman minister from his cabinet had the guts to come forward and speak about the atrocity. So much for their position on campaigns for women’s rights.

When journalists asked Smriti for her comment, the Central Minister of Information and Broadcasting just drove away; it was only later that she said: “Don’t victim-shame and politicise.”

Excuse me! Who was the victim? And who was shaming them?

Ditto Maneka Gandhi! The Union Minister of Women and Child Development gave a very lackluster response initially; it was only after PM Narendra Modi commented on the issue, did she start vouching for a death sentence for the perpetrators.

Moreover, absolute silence on the part of people like Amitabh Bachchan, Shatrughan Sinha and the likes who tweet almost every single day about everything under the sun, is baffling. Telugu actor-turned-politician Pawan Kalyan, too, spoke about the case only after the PM’s comments. Till then, he was in a “no-comments” mode.

This raises an important question: are people afraid of the BJP or do they bear a selfish agenda — to be in the good books of the PM and his government? The same government that has made promises to protect women and children’s safety! The same BJP that strongly criticised the Congress after the Nirbhaya gang rape and murder case, which occurred during the latter’s regime in 2012.

Smriti Irani in fact, urged the Congress-led UPA government to hold a special Parliament session after the 2012 Delhi rape case. “We in the BJP Mahila Morcha also appeal to the Congress led UPA that if it is really sincere about strengthening the law to protect women then convene a special session of Parliament to assure the people of this Nation that in this time of grief we stand united in our resolve and rise above our words to initiate action,” read part of Smirti’s condolence message for the Delhi gang-rape victim.

Actor and writer Piyush Mishra says, “It is a horrible incident; I really have no words. I have lost faith in politics and in the present government. I was supporting Narendra Modi initially but some past incidences have broken my faith. On both the Unnao and Kathua cases, the ruling party’s ministers are quiet, because they are scared, in my opinion.”

But, thankfully, the people of India are not scared and are on the verge of a revolt to attain justice for the eight-year-old child and for the cause of humanity. It is, in fact, owing to the nation’s anger that quite literally forced the hitherto silent Prime Minister to speak up late on Friday and condemn the beastly act.

However, general statements no longer pacify anyone. It raises questions in our minds about what the government’s plan of action is? Like activist Kavita Krishnan rightly asks: “Mr @PMOIndia good you finally woke up on rapes. But — what action on @myogiadityanath 4 protecting Sengar — Court acted not him — and Chinmayanand? What action on MP Minister Nandlal Chauhan who said Pak raped in Kathua? On MLA Surendra Singh who said mother of 3 can be raped? (sic)”

On the other hand, Meghna Pant, author and feminist said, “It is shameful that the important women ministers are not speaking up strongly. Our Prime Minister has spoken but after the public backlash. Even then, he said that criminals would be punished. But he did not give any condolence to the victim’s family, neither did he assure them protection. He was the head of the Beti Bachao campaign!” She added, “In the Kathua case, they might not want to ostracise Hindu people because of the elections. It is a sensitive state and that’s why may be they do not want to polarise the matter.”

Poster War
The compound walls of houses of the interior Chengannur in Kerala, which is all set for assembly by-poll, started turning colourful, not by the multi-colour offset-printed posters of candidates but handwritten chart papers.

The anti-BJP fronts maintain it was spontaneous reaction of people to horrific rape and murder of the Kashmiri girl. 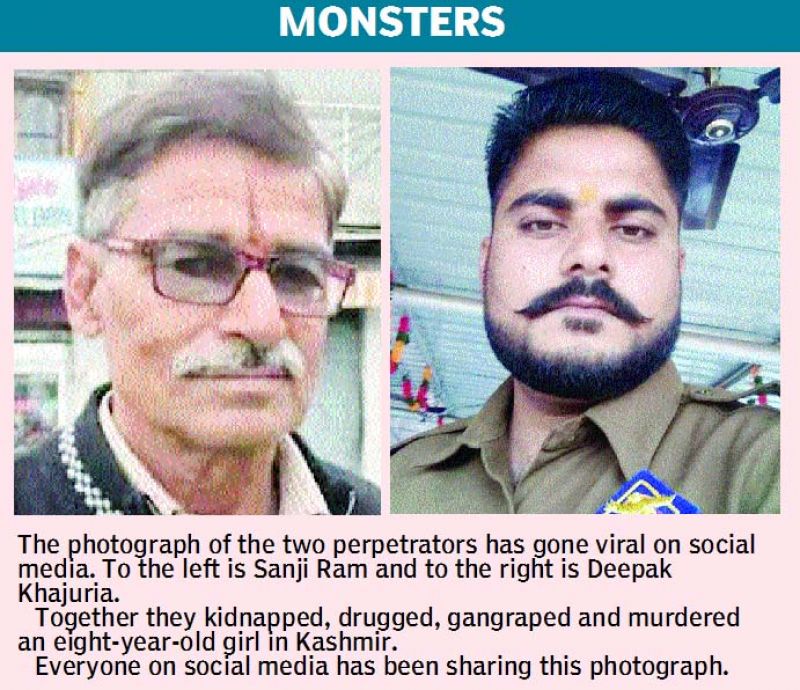 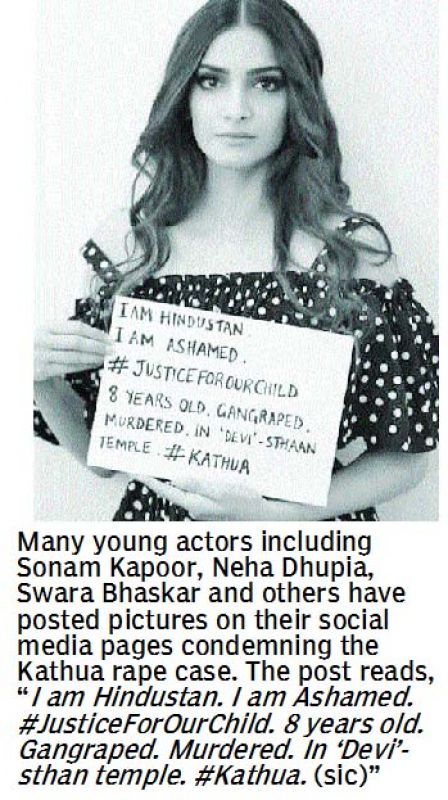 “Please read this. If your blood boils, please share it. Because at a time when there’s a section of people supporting these monsters, it’ll mean some humanity is still alive. (sic)”

“When Nirbhaya happened, everyone was unanimously against the accused. Now, there’s a section of people coming to the defense of the accused. What changed in the last few years? (sic)”

“It’s good when a leader speaks against injustice. It’s better when he does it of his own will, and not because he was under pressure to do it. (sic)”

Prakash Raj speaks up
Actor Prakash Raj shared a video online where one can see people surrounding him, shouting Modi...Modi. He posted, “Look at the bjp Modi Bhakts behave like hooligans.. with me in Gulbarga  in karnataka last night. Bunch of jokers… Hello don’t you believe in dialogue .. do you think you can terrorise me .. .do u know ur actually making me stronger ..#justasking (sic).”

This came after Prakash’s earlier tweet, “..as a parent my heart screams in pain...how much more will we tolerate as a society.. how long will we be silent to such acts of communalising crimes..when will our conscience wake up to question..to fight..and put an end to this  communal narrative #justasking (sic).”