Could we use coughing Beijing’s new air cleaner? 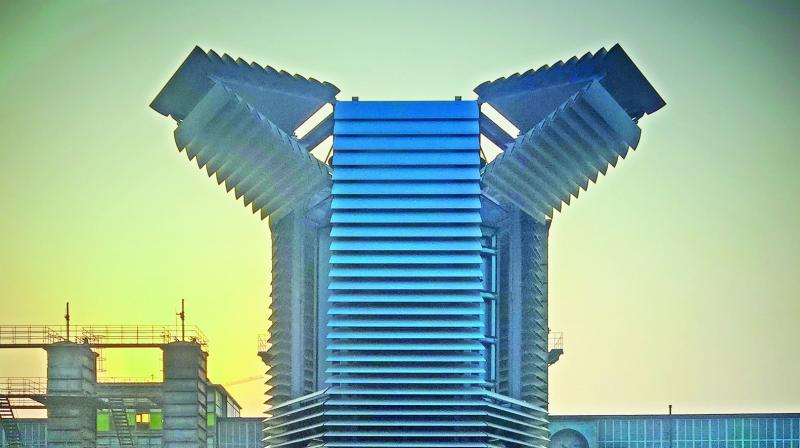 The air filter was first designed in 2013 and after a successful test-run in Rotterdam, it was made ready to take on the world.

Two years ago, New Delhi beat China as the world’s most polluted city. The capital had the highest concentration of deadly PM2.5 — particulate matter of less than 2.5 microns. The dull grey that hurts your eyes is made up of this PM2.5. It’s extremely harmful, unforgiving and unfortunately, is the planet-killing sediment left behind by the way we live our lives.

Fast forward to 2016, and Delhi continues to murder its citizens. A total of 10, 500 of the city’s people lose their lives each year due to various respiratory illnesses and on November 10, the High Court condemned the city’s politicians saying their inaction had amounted to “genocide”.

Three thousand kilometres away, a desperate Beijing — the smoked out capital of a country that loses 4,000 people every year to pollution — is trying its best to provide clean air to its people. And a seven-metre tall air purifier, which traps 75 per cent of those PM2.5 and PM10 particles, is the latest machine to join Beijing’s fight against that smog. And these giants leave behind diamonds.

“The machines work very well, yes,” says Daan Roosegarde, the Dutch artist and innovator who came up with the Smog Free Tower during a visit to Beijing a few years ago, when he could see nothing out of his hotel’s window.

“I have been to cities in India too and I have seen first-hand how the pollution is affecting the people. We have to become more responsible... cleaner. The machines are just the first step,” says Roosegarde.

The air filter was first designed in 2013 and after a successful test-run in Rotterdam, it was made ready to take on the world.

The machines suck in and clean 30,000 cubic metres of air every hour using, according to reports, 1,170 watts of energy (“no more than a water boiler”). They are then able to create pockets of clean air across public spaces.

But where do the ‘diamonds’ come in?

“A diamond from the earth as you know is the result of carbon being subjected to intense pressure, for millions of years. The diamond we are creating is actually a by-product, jewellery you can buy to help fund these machines and a cleaner future. Every little piece you buy immediately goes back into the Smog Free Project. By sharing a Smog Free Ring, you donate 1000m3 of clean air.” Roosegarde is certain that the time to act is now. His Studio roosegaarde has been responsible for glow-in-the-dark walkways and is also experimenting with more efficient bicycle designs. In fact, reports claim Roosegarde one day hopes to cleaning up the outer reaches of the Earth’s atmosphere.

“But are these air-cleaning machines the perfect solution for a cleaner, more liveable future? Not really. We have to become more environment-conscious. Efficient mass transit systems, bicycles, space for people to walk... these are bigger solutions. We must act before it’s too late for the planet. Science and design can really merge to create wonderful things and a large percentage of our innovation must focus on creating a more promising future.”

Roosegarde is certain a few of these machines around parks in Delhi can create pockets of relief in a city that’s choking.

But that’s just it, relief. Even as China spends billions to clean up its air Delhi, as we speak, is losing people to tiny particles.