Texting has been an integral part of the adolescent’s life since phones became ubiquitous in the early 2000s. 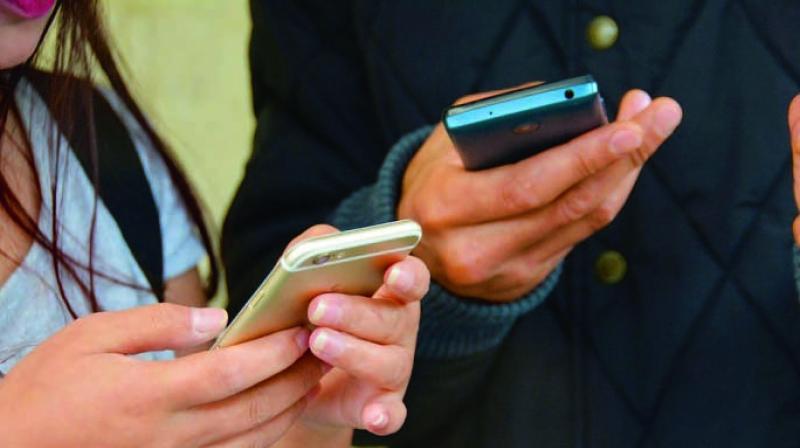 A big impact of texting is that the quality of communication is much more surface level.

In today’s society, texting has been the main source of communication for most people. People no longer just pick up the phone and call someone but rather click a few letters and quickly send their direct message. Texting has been an integral part of the adolescent’s life since phones became ubiquitous in the early 2000s. As an easy method of communication between two or more people that can be picked up and left off whenever it’s convenient for the user, there is no surprise at its explosion of popularity. However, what has texting done to affect the way we not only communicate with each other, but also how we understand English grammar as a whole? While texting has been able to improve communication by allowing people to communicate at their own time, being able to create group chats, and to also send pictures; texting has also had dramatic negative effects on the way we use language. Especially with the millennial generation, texting entails a lot of short hand form of communication. For example, instead of saying “talk to you later!”, people often now just say “ttyl”. This is just one example of many where texting has actually impacted the way we communicate with others.

A big impact of texting is that the quality of communication is much more surface level. Texting, often times, is filled with one line responses and thus prohibits the deeper creation of friendship that other forms of communication can create. On top of that, abbreviated styles of texting like “txt” and “ttyl” makes conversation much less intimate between the two people. This makes it harder to create meaningful conversations with other people and further promotes a more distant style of communicating. Jacquie Ream, a former teacher and author of Kiss: Keep It Short and Simple, a guide for becoming a more effective writer, says: “(W)e have a whole generation being raised without communication skills.” She believes these poor communication skills coupled with the overuse of acronyms and abbreviations such as “LOL” or “SMH” are the reason so many high school students are not at a proficient reading and writing level.

Jeffrey Kluger, author of the CNN article We never talk any more: The problem with text messaging says: “Habitual texters may not only cheat their existing relationships, they can also limit their ability to form future ones since they don’t get to practice the art of interpreting nonverbal visual cues.” Meaning texting is not only perhaps hurting the relationships we have with our close friends and relatives now, but also making us poorer communicators such that it will be harder for us to make more relationships in the future.

A big issue with texting is how difficult it is to interpret language through people’s texts. By spoken forms of communication and face-to-face, people’s emotions, hand-gestures, and ways they speak tell a lot about what a person is trying to say. This makes it much more clear for the other person to understand what the other person is saying and they establish a better relationship between the two people. However, with texting, it is much harder to decipher this. With this kind of communication, you can’t really understand exactly what the other person is trying to say. There is a lot of open interpretation which often times is not understood correctly. Yes, there has been the creation of emojis to better add emotion and “life” to texting. However, this is not the same as face-to-face interaction and the human engagement that is still lacking with direct messaging. Emojis are frequently utilised to depict the emotion of the message’s composer. However, the use of such emojis has greatly impacted our use of language. Users no longer need to thoughtfully combine words and punctuation to portray their feelings; for example, they can simply add an emoji of laughter to indicate their joy. The impact on society of this phenomenon is far-reaching. Individuals of modern society have become so adept at communicating with a restriction on words and characters, that they are losing the ability to converse. The practice of formulating sentences to accurately depict one’s emotions and thoughts helped individuals develop skills vital for human interaction and communication.

Texting further promotes using improper grammar and poorer writing skills. By texting, it is easier for people to take the easy way out by spelling things wrong to make words shorter like “cuz” instead of “because” or to incorrectly format sentences that wouldn’t be acceptable in an actual paper. For example, texts are often run-on sentences with no sot of punctuation or distinction between thoughts. This ends up creating a dramatic effect on people since texting is such a huge part of people’s days. Since everyone texts very often, their continued use of improper grammar or use of a language can translate into their day to day. People can be so habituated with using these “shortcuts” in texting that it severely impacts one’s knowledge on correct grammar. For example, I know with many of my friends, they often spell words incorrectly or in a shorter way because through texting it makes it easier and faster for them to get their point across. However, due to this, often times they end up forgetting the actual spelling of certain words since they are no longer used to writing it like that. Overall, these smaller aspects about texting end up having much bigger consequences in the real world. The continual usage of improper grammar and spelling can impact how people communicate with each other. It makes them lose their ability on how to convey their thought cohesively and effectively.

The art of language may be at risk. There are clearly many benefits to writing shorthand for text messages, but the impact on grammar is not one of them. In today’s society, new acronyms are regularly being added to the dictionary, vowels are often excluded from words, and the use of fragments instead of sentences is becoming commonplace. While some may argue that such a transition increases the efficiency of communication, it also sacrifices grammar, which provides additional meaning to the content of our messages. For example, the improper use of a punctuation mark can critically alter a message.

Texting has brought a world of convenience to our lives with the ability to have a sort of on demand conversation, but this can come at the price of invaluable verbal communication and writing skills if we use it to replace all interaction.

The writer is a well-known linguist and columnist and teaches at Aligarh Muslim University. He may be reached at: warsimj@gmail.com