A session on gender bias at workspaces titled Mardon Wali Baat, attempts at achieving a platform where men and women are equal. 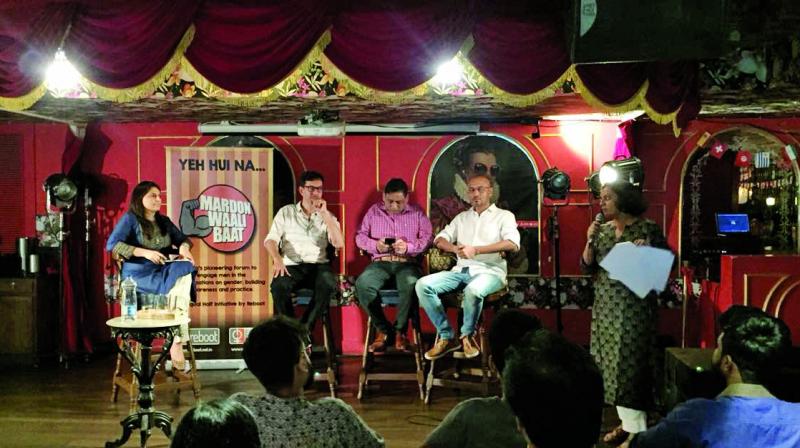 It might come as a shocker to you that India has been championing the cause of gender equality rights from the Vedic period, but centuries later we are still only at the foot of the solution. While gender biases are all pervasive today, one area where it has dug its fangs deep into our society is in our workspaces.

Anupama Kapoor, the founder of Reboot — a mentoring and capacity building career community for women professionals —  in her 20-year stint at corporates has met several women over the years who have wanted to build platforms or forums for women to  grow and sustain their careers. While Anupama witnessed this in her own life, she realised that a viable solution can't be sought without addressing the gender gap and involving men in the conversation.

‘Mardon Wali Baat’ an event organised by Reboot, did just that. The hour-long, session called ‘The equal-half’ kick-started with Anupama stressing on the fact that women centric policies at workspaces are only a stop-gap solution to the gender issue, “Maternity leaves, surrogacy and adoption leaves, work from home, etc are existing. But if you look at the data coming out from institutions like the World Economic Forum and the UNDP, the reports state that women’s workforce participation is dropping. So this issue is arising not because there aren't enough corporate policies or governmental policies but a social conditioning where women are not encouraged to work.”

Speaker Suraja Kishore, Executive Vice President and General Manager at McCann narrates an incident from his life where the problem revealed itself to him in an unusual way. “I wrote a gender agnostic script, for a detergent brand where even men were shown using detergent. It bombed in research! Women across India said ‘yeh mardon ka kaam nahi hai’. So to me the issues are very basic, it’s not only about gendered roles. Gender roles are a societal conditioning. We are making this topic intellectual, while not addressing the everyday domestic violence at homes,” he says hinting at the gender roles we succumb to in our every day lives.

In the last couple of months many Bollywood actresses such as Sonam Kapoor, Alia Bhatt and Deepika Padukone, have spoke strongly about the wage-gap in Bollywood. The gender-bias does not spare even women of their stature. Actor Rajat Kapoor, who was also a part of the panel, dwells on this issue. “Women are working in the industry, but they don’t really have jobs that have power. Women mostly have jobs in the costume department, makeup department or as third assistant director coordinating with the various departments, which is an easy job. They don’t have much responsibility,” he said, concluding that it looks like women are not trusted enough in the industry and they are not given important jobs.

In the latter half of the show, the session was thrown open to discussion with the audiences. Rishi Gupta, an IT professional who was present at the event said, “There have to be more conversations about this and men have to be more actively involved. Just because it’s a women’s issue, it can’t be only the women who would talk about it. It is a long process, but the process has started.”

Sonal Rao, another audience member says, “Conversations are what we need. Exclusive focus on education, HR policy or financial inclusion is not going to help. Society needs to be engaged in challenging the mindsets. We need to question our thinking given the time we are living in.”

While the discussion was about gender equality, it was no surprise that the discourse led on to the lack of child care facilities that force women to stay at home. It also questioned the speakers about toxic masculinity at large. While every one went home angry yet enlightened, it was clear that the fight for equality had only just started and it has a long, long  way to go.