Humour is the best policy: Come back, Karan Thapar, all is forgiven

Karan Thapar is one of India’s most respected journalists. 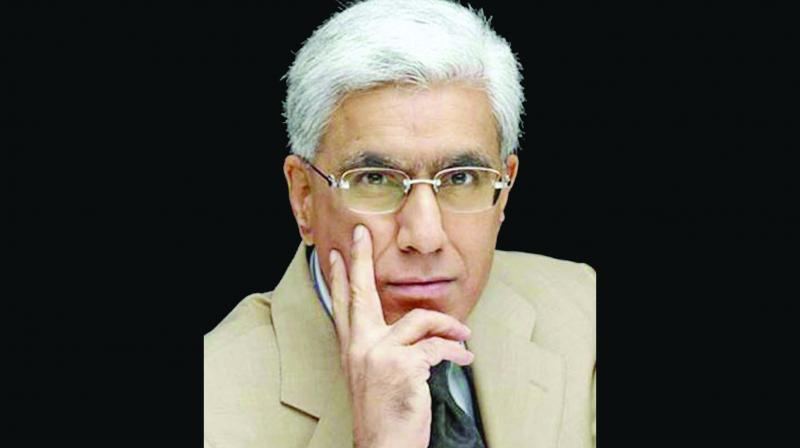 Karan Thapar’s ‘To the Point’ has been conspicuously off the air. More to the point, we know not why. We await his reappearance, in another avatar, with bated breath. This imagined conversation took place a few weeks prior to his departure. A Satire News exclusive.

Karan Thapar is one of India’s most respected journalists. He is sharp, thorough in his preparation and To The Point, to accord his erstwhile television chat show its designated brand name. Impeccably dressed, suit and tie or bow tie perfectly synchronised to match his well groomed and distinguished silver grey hair. Sartorial elegance personified. He speaks in clipped, Oxford accented English. His subjects find his burrowing and darting eyes a bit disconcerting, as if they were caught with their hands in the cookie jar. To say nothing of his unnerving habit of making pointed references to something the subject had said, and totally forgotten, several years ago. As in, ‘Interesting you should say that Mani Shankar Aiyar, because at an election rally in your constituency in Mayiladuthurai (makes a complete hash of the pronunciation), you said just the opposite, and I quote……..’

Given Karan Thapar’s notoriously elusive personality, Satire News’ dogged persistence finally paid off. The great man agreed to be interviewed in camera, which actually means without cameras, in the convoluted ways of the English language. Given our shoestring budget, we could not afford to invite the celebrated anchor to a posh 5 star location. Instead he agreed to meet us at our unpretentious office, over a cup of matka chai and dhoklas.

Satire News (SN): ‘Good morning, Karan. So good of you to agree to be interviewed by us at our modest premises. What does it feel like, to be on the other side of the table, in a manner of speaking?’

Karan Thapar (KT): ‘Mr.Thapar to you, if it doesn’t put you out. We hardly know each other. Calling me by my first name? It’s too soon. And you call this a table, this battered old school desk? A pox on you’.

SN: ‘Extremely sorry, Mr.Thapar. We proffer, with bowed head, our unconditional apology. Won’t happen again, cross my heart and hope to die. A pox on you??’

KT: ‘Just an old English expression, when you want to curse or put the mockers on someone. Went out of currency in the 18th century, but I am partial to a smidgen of Ye Olde English. And another thing. You described your premises as modest. That is a very good description, if a tad understated. Could do with a lick of paint’. SN: ‘Er, thank you, I guess. Can we hunker down to the questions?’

SN: ‘Right. By the way, I hope the dhoklas are not too salty’.

KT: ‘No, they’re scrumptious, though I would have preferred fish fingers with mayonnaise. And speaking of salt, en passant, have you read my book ‘More Salt than Pepper’? Available on Flipkart, Snapdeal and Amazon. Suggest you order it eftsoons. There’s a special offer on. Sorry, I digress’.

SN: ‘Actually, we have already read the book Mr. T, if calling you that is not a liberty. No? Super. We downloaded it for free from Kindle.’

KT: ‘Damn Kindle and its free downloads. That’s one royalty fee up the spout. Right, on with the questions. These diversions are pleasant but my time is precious.’

SN: ‘Righty ho, Mr. T. Tell us, of all the famous people you have interviewed on television, who were the most difficult?’

KT: ‘All of them. I select my subjects for their high degree of difficulty. Makes for spicy television. The cut and thrust of debate is never better exemplified than to cross swords with a pugnacious foe. I see them as innocent sacrificial lambs. That’s why my programme graphic features a sword cutting a swathe across the screen. Prepares the viewer for the thrust and parry’.

SN: ‘Most interesting, but can you name some subjects who challenged even your formidable array of attacking arsenal?’

KT: ‘Hmmm, nice one. ‘Array of attacking arsenal’. You have a natural bent for alliteration, my friend. You are right, of course. Offence is my best form of defence, even if that meant being offensive. Let’s get back to your question, lest I be accused of dissembling. My audience research tells me that most of my subjects squirmed a goodish bit under my close questioning. However, there were two notable exceptions. The late Benazir Bhutto and the equally late Dr. J. Jayalalithaa’.

KT: ‘How very perspicacious of you. Your acute powers of observation are astounding, my fine, feathered friend. Top that for alliteration!’

SN: ‘Pugnacious, perspicacious? I’ll need a thesaurus. But I do welcome your dripping sarcasm, which is what we love on the idiot box’.

KT: ‘Idiot box, eh? Thank you for the compliment, though it sounded distinctly backhanded. From this point on, you’re on a timer. Another couple of questions, and I must make tracks’.

SN: ‘To get back to the two iron ladies, both of them really had you squirming, didn’t they? Your piercing looks and scathing irony did not impress them one bit’.

KT: ‘I say, old chap, have a care will you? You’re on a slippery slope. Sometimes, I act submissive, but it is deceptive. Don’t be fooled. You should have seen me at Oxford during the debates’.   SN: ‘I daresay Mr. T, but they certainly had your measure. Of course, the fact that Ms. Bhutto was at Oxford with you may have given her that easy familiarity that breeds contempt. But Dr. Jayalalithaa was something else. She had you on the mat and you didn’t last the count. A technical knock-out’.

KT: ‘I think I’ve conceded enough brownie points for one evening I’ll have you on my programme next and give you a taste of your own medicine’.

SN: ‘It’ll be an honour, Mr. T. And please take this doggie bag of dhoklas with you. With our compliments’.

The author is a brand consultant who loves music, cricket and good humour