The "cat-fox", probable new species of feline recorded in Corsica. 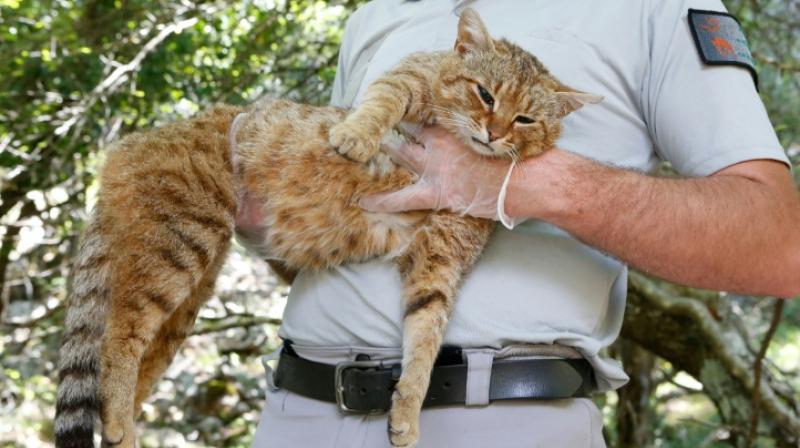 ONCFS has identified 16 fox-cats and has captured 12, including a female, explains to AFP Carlu-Antone Cecchini, missionary forest cat at the National Office. (Photo: AFP)

Corsica: Gray-tailed hair, ringtail, the "ghjattu-volpe" - "fox-cat" in Corsican - growls in his cage. In the forest of Asco, two agents of the National Office for Hunting and Wildlife (ONCFS) show AFP what they think is a new species of feline.

"For us, it is a natural wild species, which was known but not listed, because it is an extremely discreet animal, with nocturnal manners. It is an extraordinary discovery," enthuses AFP Pierre. Benedetti, chief environmental technician of ONCFS, on the site of the capture carried out without violence. This undergrowth of Haute-Corse is accessible after 45 minutes of walk in the rocky and forested landscape of the Asco Valley, where one meets cows and rare hikers.

It is in this "steep mountainous" territory of 25,000 hectares, "far from the presence of man" and where there is "water and a plant cover to protect it from its main predator, the eagle royal "that the ONCFS has identified 16 fox-cats and has captured 12, including a female, explains to AFP Carlu-Antone Cecchini, missionary forest cat at the National Office. All were released after a quick review.

Once asleep, the silky-haired feline, very similar to the classic domestic cat for the uninitiated, is studied by both agents: 90 cm from the head to the end of the tail, ears of ears "very wide ", short whiskers, canines" very developed "."Tarsi of the hind legs always very black", "red-rust colour on the belly", the density of very important hair which preserves fleas, lice or ticks. Tail "with between 2 and 4 rings and always a well black terminal sleeve", "zebra on very characteristic front legs"

"It's their length and their tail that has earned them the name of fox-cat from one end to the other of the island," notes Benedetti, adding that it has been observed in several Corsican regions. Equipped with a chip with an identification number in the neck, this male "from 4 to 6 years", already captured several times, has a green eye and a brown eye damaged during a fight with another male.