Though the 67-year-old has 30 defamation cases filed against him in courts across India, he does not let them bog him down. 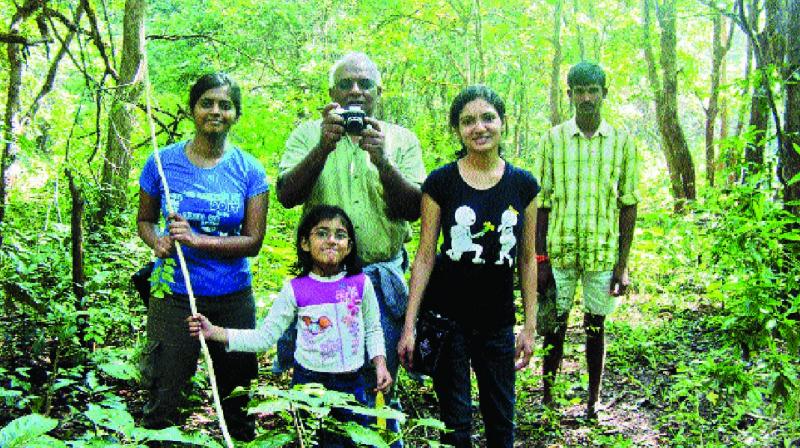 Sagar Dhara with two of his students, Karnika and Chetna, both are engineers who interned with him and later went to doing Masters in climate change in Sussex University and Yale. The little one is his daughter and the man is the guide. This picture was taken in the Western Ghat forests in Belgaum.

At a time when environmental concerns are on everyone’s mind, it is the few who actually work tirelessly behind the scenes to protect it that deserve a special mention.

Environmental engineer Sagar Dhara is no celebrity but what he has achieved is worth putting under the spotlight. It was on the basis of a report submitted by Dhara that the 1,200 MW coal-based Udupi Power Corporation was slapped with a massive `5 crore fine and had its environmental clearance to expand in the area cancelled.

The move was a huge victory for the people who live in the area as they had been protesting against the thermal power station for ten years before it was established in 2008, just outside the Kudremukh National Park. Owned by industry behemoth Adani group, the people had complained about the ill-effects on public health and the poor yield of crops due to the proximity of the plant.

Says Dhara, “The people of the area had been complaining about crop yield losses up to 25 kilometres from the plant. All agriculture had also almost completely stopped in a radius of 10 kilometres around the plant. There were no crops and no compensation.”

Giving its verdict, the National Green Tribunal observed that the “mismanagement of the environment was evident from the contamination of the water (surface and ground), soil and air apart from the impaired functional aspects of the biotic elements.” The plant was fined under the ‘polluters pay’ principle of the National Green Tribunal Act, 2010 and asked to make the payment to the Central Pollution Control Board (CPCB).

Dhara remembers starting to work for the underdog from his years at IIT Bombay in the 1970s. Even though he always had a job, his altruistic side has always remained active, working for several peoples’ movements for free. Therefore, when Janjagriti Samiti, fighting against the Udupi plant came to him, he was again only too happy to help.

But the former environmental engineering consultant to the UN Environment Programme believes that the problem with industrial pollution will not stop unless corrective steps are taken, starting with CPCB. “It is the regulating agencies who are helping the pollutants. The PCBs should be dissolved. They have become completely ineffective and counter-productive in environmental management. The granting of environmental licenses should be transferred to local self governments,” he says.

Though the 67-year-old has 30 defamation cases filed against him in courts across India, he does not let them bog him down.

Born to an eye surgeon and a well-read mother in Mumbai, Dhara remembers having a questioning mind since childhood. His mother recalls, at age four he asked why some people were poor! While his maternal grandfather K. Narasimha Rao was a freedom fighter “who spent most of his time in jail”, his paternal grandfather D. Sitaramaya was a Deputy Collector in Bellary district who later became the Diwan of Vizianagaram. He adds proudly, “My grandfather and father were both keen to get a bride from a freedom fighter’s family. Therefore, even though my father was a gold medallist in MBBS, with a degree in medicine from London, there was no dowry involved in their marriage, even in those days.”

Having worked as a professor at BITS Pilani, the father of three says his thirst for knowledge has is unquenchable.

“I was always searching for answers but no one had a single solution.

I even lived in Gandhigram village as I was enamored by Gandhi at the time, but again, I did not find all my answers about inequality there,” admits Dhara.

Neither did he find his answers in the works of J. Krishnamurti and German statistician and economist E.F. Schumacher, whose lecture he attended in London.

These days, it is climate change that he is most concerned about. In fact, matters of global environmental issues have come to such a point that an emergency should be declared, states Dhara. “We only have 12 years to limit a climate change catastrophe. Environmental degradation has led to such rapid deterioration of land, water, air and biodiversity, that it has the potential to tip society over,” he cautions, adding, “Energy shortages were responsible for many civilisational collapses in the past such as the Mayans, whose sudden collapse was due to the overuse of natural resources.”

According to Dhara, the biggest threats we face are natural resource depletion such as oil gas and fossel fuels; inequality, where the richest 1 per cent own 45 per cent of the world’s wealth; global warming and environmental degradation of air, water and land.

He warns, “Resource depletion and inequality are seen as issues affecting certain societies or nations as most upheavals have remained largely contained to certain countries or societies. But they may no longer hold true in today’s globalised world and it will affect us all.”