The festival seems to be struggling to truly modernise and bring about a change in status quo. 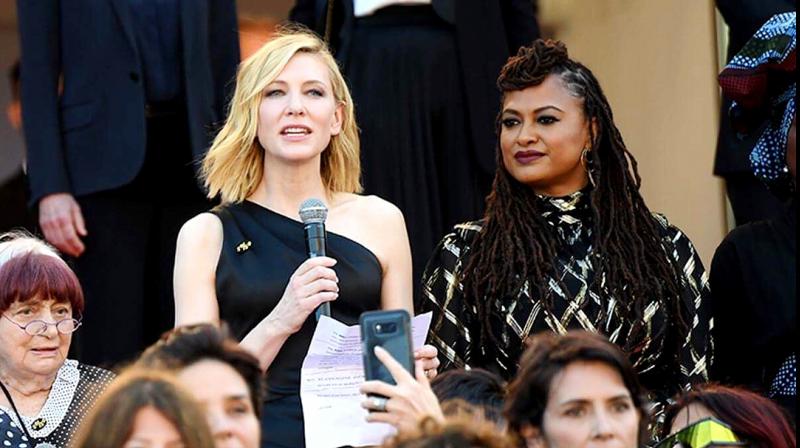 The historic and moving red carpet entrance of 82 women from all countries and professions in cinema, at the 71st edition of the Cannes Film Festival for Les Filles Du Soleil (Girls of The Sun) by Eva Husson. (Photo: Instagram/festivaldecannes)

Cannes: International film festivals are generally not considered to be family-friendly affairs. Especially Cannes, which is packed with people and often an exhausting experience. For their latest efforts towards being more sensitive to gender issues and women, the 72nd Cannes Film Festival has introduced an initiative called ‘Le Ballon Rouge’.

Named after a children’s film by Albert Lamorisse, it offers a package of services aimed at making the festival more appealing to families. As reported by The Guardian, “There is a breast-feeding and baby-changing area; a dedicated kids’ pavilion; an accreditation process providing two free additional badges for a nanny and baby; priority and easy access for parents with young children and prams; plus something called Le Ballon Rouge baby VIP kit, which includes a list of certified nannies for after-hours care.”

But many are questioning the feasibility and practicality of such initiatives in the face of allegations that the Cannes Film Festival is still not doing enough to address the more pertinent, bigger issues to ensure equality to women. Especially, when it comes to controversial individuals like veteran French actor Alain Delon, who will be given an honorary Palme d’Or this time around.

French actor and businessman Alain Delon, has made statements opposing adoption by same-sex couples (calling it “against nature”) and has admitted to being physically abusive towards women in the past. The festival has in fact defended this decision, stating that they were honouring Delon because he is a legendary actor and has been a prominent part of Cannes history.

This move has drawn rebuke from women’s groups and activists across the globe. The Cannes chief Thierry Fremaux recently defended the fest’s decision to present Delon with the award saying, “We are not going to give Alain Delon the Nobel Peace Prize. We’re giving him a Palme d’Or for his career as an actor.”

To put matters in perspective, last year Lars von Trier was welcomed back to the festival despite allegations by the singer Björk that he sexually harassed her on the set of his 2000 film Dancer in the Dark. This year too, like last and 2017 even, only three women directors are present in the competition – Jessica Hausner, Céline Sciamma and Justine Triet.

This unsaid tradition to include only three female directors every year comes across more as tokenism rather than true representation of the women directors and their potential. There seems to be no real change in the attitude of Cannes Film Festival, which seems to having a hard time changing its status quo and not be dominated by a culture catering to influential and powerful men.

The 71st edition of the festival, it seems had done much more, especially in the context of MeToo movement, ousting a Cannes regular, Harvey Weinstein. The Italian actor and director, Asia Argento had delivered a provocative indictment of Harvey Weinstein. “In 1997, I was raped by Harvey Weinstein here at Cannes. I was 21 years old. This festival was his hunting ground,” she had stated before highlighting the hypocritical culture of the festival in general. Kristen Stewart too did her nit and removed her Louboutin heels on the red carpet, in order to protest against the strict dress code that dictates the appearance of the festival’s female guests.

The protest by 82 women earlier at the festival was also a historic step taken by women at the last edition of the film festival. The number 82 signified the only 82 movies by female directors have been in contention for prizes in the entire 71 years of the festival, as compared to more than 1,600 films by male directors. Jane Campion is the only female director to have won the Palme d’Or, for her 1993 film 'The Piano' till date.