The 92-year-old queen gave her blessing for the marriage in accordance with the 2013 Succession to the Crown Act. 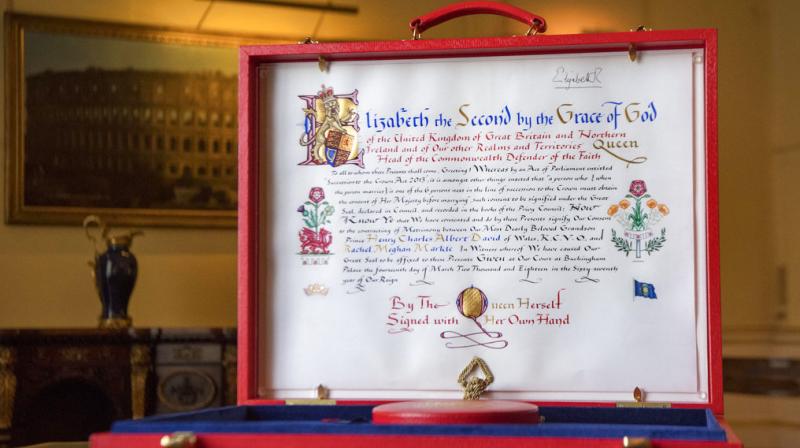 The design to the left of the text incorporates the red dragon of Wales along with the UK’s floral emblems. It also includes three tiny red escallops from the Spencer family Arms, the family of Harry’s mother, the late Princess Diana. (Photo: AP)

London: Britain’s Queen Elizabeth has given her formal consent to the marriage of her grandson Harry to American actress Meghan Markle in a historic document made of vellum that is decorated with symbols representing the lives of the couple.

Reading “Now know ye”, the hand-written Instrument of Consent carries the Queen’s signature, “Elizabeth R” and is sealed with the Great Seal of the Realm which is attached to the foot of the document by woven cords.

Prince Harry, the sixth in line to the thrown, and Markle, best known for her role in US TV drama “Suits”, are due to marry next Saturday at Windsor Castle, home to kings and queens for nearly 1,000 years.

“NOW KNOW YE that We have consented and do by these Presents signify Our Consent to the contracting of Matrimony between Our Most Dearly Beloved Grandson Prince Henry Charles Albert David of Wales, K.C.V.O., and Rachel Meghan Markle,” it reads.

The 92-year-old queen gave her blessing for the marriage in accordance with the 2013 Succession to the Crown Act, and the elaborately illuminated document incorporates references to the couple who met in 2016.

The design to the left of the text incorporates the red dragon of Wales along with the UK’s floral emblems. It also includes three tiny red escallops from the Spencer family Arms, the family of Harry’s mother, the late Princess Diana.

Representing Markle, the design to the right of the text includes the rose, the national flower of the United States, while two golden poppies are the state flower of California, where Markle was born. 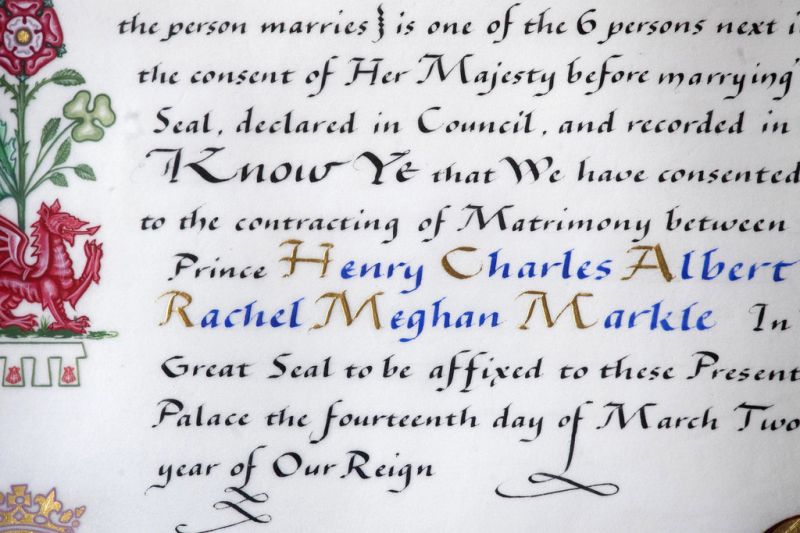 Bearing the names of Prince Harry and his fiancee Meghan Markle, the 'Instrument of Consent', which is the Queen's historic formal consent to Prince Harry's forthcoming marriage to Meghan Markle, photographed at Buckingham Palace in London, Friday May 11, 2018. Britain's Queen Elizabeth II signed, top right, the Instrument of Consent, her formal notice of approval for the wedding in elaborate calligraphic script issued under the Great Seal of the Realm. (Photo: AP)

The document, which will be given to the couple after the wedding, is drafted by the Crown Office and illuminated on vellum, a fine parchment made from the skin of a calf that is only used for important state documents.

It was made by one of a panel of scrivener artists.