Dog gets reuinted with family four years after running away

Michigan man gets call from microchip company telling him family dog has been found 100 miles away from where she disappeared 4 years ago. 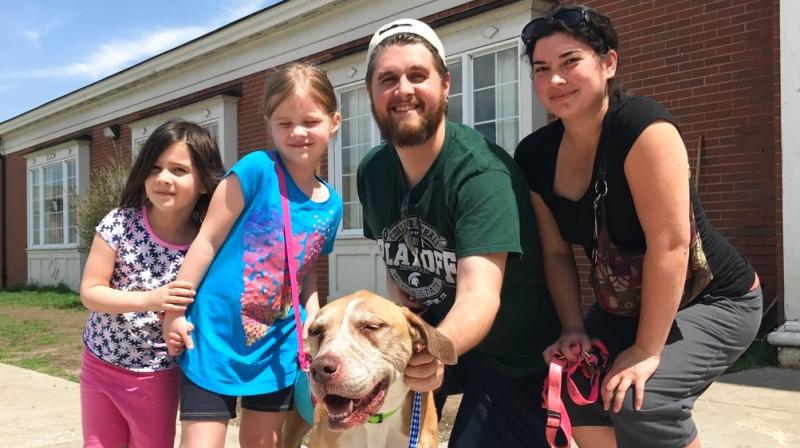 This May 5, 2018 photo provided by Laura Simmons-Wark, shows the Wieferich family holding their dog “Bambi” at the Lucas County Canine Care & Control in Toledo, Ohio. The dog ran away from the Lansing, Mich., family four years ago was reunited with them after being found more than 100 miles away in Ohio and identified through a microchip. Bradley Wieferich said he was surprised by the call from a microchip company telling him Bambi had been found. (Photo: AP)

Toledo (Ohio): A Lansing, Michigan, man thought it might be a prank when he received a call from a microchip company telling him his family's dog had been found in Toledo - more than 100 miles away - four years after she ran away.

"I was stunned," Bradley Wieferich told The Blade .

Toledo police earlier this month found Bambi, who is around 12, wandering in a city neighbourhood. The officer took her to Lucas County Canine Care & Control, where an employee scanned her microchip and discovered she had a family to return to.

"She was very thin, but very sweet," said Laura Simmons-Wark, community outreach coordinator for the shelter. "Who knows where she's been all this time. We have no idea how she made it all the way down here."

Bambi was reunited with the Wieferich family about a week ago. Bradley Wieferich said he initially didn't recognise her as he walked past cages in the shelter, but then noticed markings on her muzzle and was greeted by a familiar howl.

"She was ready to come home," he said.

The family adopted Bambi when she was 7 or 8 months old. She began escaping after the family's golden retriever died of cancer. Wieferich bought another dog to provide Bambi with companionship, but she ran away again about six months later. The family searched to no avail and assumed she had been adopted by someone else or had died.

Wieferich told The Blade that Bambi has settled in nicely and even remembers some of her old tricks.

"I'm really amazed that she's back," he said.

Simmons-Wark said Bambi's story shows the importance of microchipping pets and for people to try to have stray animals scanned when they find them.

"Not all stray dogs are homeless," Simmons-Wark said. "Some are just lost.”