The business of elections

Aslam, who has a clothing shop, used to sell party-related merchandise every election season. 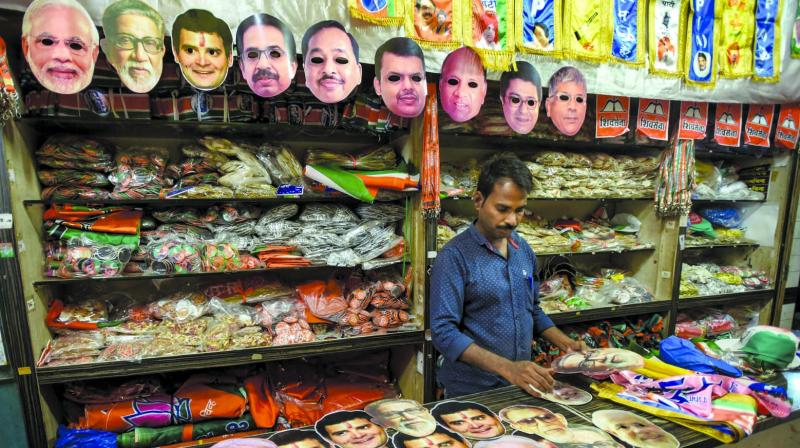 Local businessmen selling election-inpsired merchandise say business is poor, with people choosing to show their devotion for parties online rather than off it.

Step inside Naresh Choudhary’s ancestral clothing shop on Ambedkar Road in Lal Baugh and you are met with the sight of sundry political paraphernalia. A mammoth Jai Bhim flag covers an entire wall, while the rest of the shop is filled with lanyards, key-chains, mufflers, masks, badges and ribbons that boast the colours and symbols of key political parties in the fray this election – the Bhartiya Janta Party (BJP), Indian National Congress (INC), Shiv Sena, Maharashtra Navnirman Sena (MNS) and the Nationalist Congress Party (NCP). “This election season I have earned 30-40 lakhs,” declares a sheepish Naresh, although nearby shop owners, also selling election-inspired merchandise, insist that he isn’t being truthful and complain that they have an opposite tale to tell.

Though the first phase of polling for the Lok Sabha elections kicked off on Thursday, and news of political parties spewing vitriolic jabs at opponents abound, Lal Baugh vendors say that the election fever hasn’t gripped their customers yet as not many have been visiting their shops to buy party-related merchandise in support of their favourite party. And so, the wait to capitalise on voter loyalty continues for them.

Aslam, who has a clothing shop, used to sell party-related merchandise every election season. However, because of the decreasing demand, he isn’t doing so this time. “Originally, we are dresswale, but we used to sell election-inspired merchandise seasonally. But now, there are no crowds. The elections have started but there is still no glimmer of hope in the market. In fact, the stock that I had from the previous elections, I had to sell it off to some other trader. There must be almost 30 shops in Lal Baugh today, and now according to my estimate, more than half are not selling merchandise this season,” he rues.

A stroll through the lane confirms this estimation and more than election-inspired merchandise, one spies the deep blue Jai Bhim flag fluttering in places, perhaps in preparation for Ambedkar Jayanti celebrations.

According to veteran seller Yogesh Parekh of Parekh Brothers,  one of the first shops to sell election-related products 18 years ago, the current slump in the market is because of two reasons – the nature of the Lok Sabha elections and India’s aggressive digitisation campaign. Talking about the Lok Sabha elections, he says, “We didn’t earn as much this time, because this is the Lok Sabha elections and there are a few parties in the fray. But during the Vidhan Sabha elections, the number of candidates will be more, so we’ll have more customers. We earn the most during the BMC elections,” he insists, before pointing at an unopened sack of unsold caps. He fondly remembers the time when his, and his now-defunct neighbouring shop, were the only two shops in the election-inspired merchandise business. They used to open their shops at four in the morning and work till 12 in the night.

The second reason for the sluggish demand, he says, is because rallying on online platforms has taken precedence over physical rallies. “Earlier, there used to be so many rallies and now when I look at one, I hardly see 50 –100 people. Now, if you put one message on WhatsApp, it reaches thousands of people, and that too without spending any money. Earlier, we even used to sell cut-outs of politicians, but not anymore,” he explains. Agreeing with him, a much younger businessman, Atul Ghor whose adjacent shop displays assorted t-shirts in support of Shiv Sena, NCP, Congress, and BJP, says, “Ever since the idea of ‘Digital India’ has emerged, our business has seen a steep decline. For these political parties, campaigning is much more efficient through WhatsApp and Facebook than on foot.”