Priya dutt to focus on housing and women empowerment 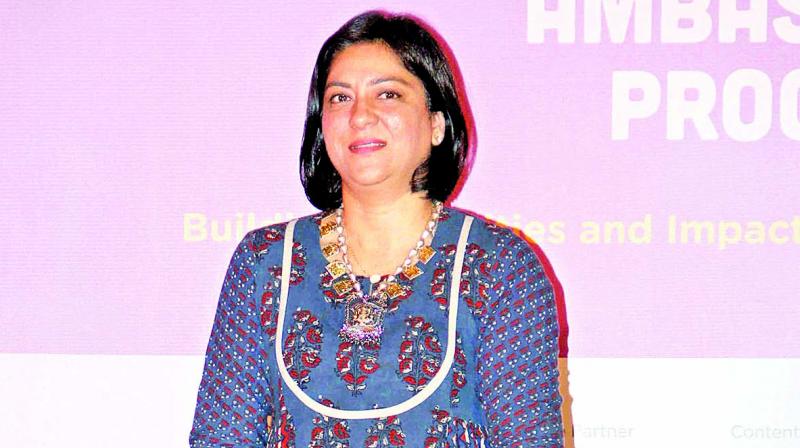 After being elected to the Parliament of India twice — first from her father’s seat in Mumbai North West constituency in 2005 and later from Mumbai North Central in 2009, Priya Dutt, who represents Congress, lost her seat in the last Lok Sabha elections to BJP’s Poonam Mahajan. However, in the ongoing Lok Sabha elections, Priya is not only confident of giving Poonam Mahajan a defeat but the politician also feels that there is no competition at all from the BJP candidate.

“I wouldn’t even compare the last elections to this elections because people were completely blinded by a wave. There was this ‘Modi’ wave due to which they didn’t even think over the candidate they are voting for. So, I can’t even compare but this election is more of fighting for what is the truth. And, what has been shown in the past five years is a complete lie. Everybody knows that they promised people development, employment and a robust economy. Also, their promise of bringing back the ‘black money’ into our country and crediting Rs 15 lakhs in the account of the people have proved to be unfulfilled. Nothing they said has been fulfilled so it’s a mere lie,” says Priya and adds that the BJP did nothing towards development in the last five years even though they were in the Centre and had a cooperative alliance. “We always worked as a coalition government, which was tough, but we achieved a lot,” she says.

Speaking about her agendas for the next five years if she comes to power, the politician says, “My agendas are pretty much similar to from where we started in the 2014 elections... unfortunately, nothing has moved ahead from that. This constituency is very diverse - you have the elite upper class, middle class and on the other side, you have a lot of slums as well. My constituency comprises of 60 per cent of slums. Undoubtedly, the needs of all these sections are completely different and we have to address the issue of the housing, which is and has been a very big subject waiting to be addressed. (There was supposed to be) rehabilitation of the people on the central government land, which has yet not happened.”

Further adding on her agendas, she says, “We had taken the rehabilitation proposal to the former Prime Minister Manmohan Singh, we will again address the national policy of (allotting) the Central government land for rehabilitation. And then, we are looking at the redevelopment projects in Bandra East area. When we talk about infrastructural development in our constituency, a lot has happened in the last ten years by the UPA government - Milan Subway Road, Bandra–Worli Sea Link, Chembur Link road, etc. I have to proudly say that in all these projects, people were rehabilitated. And as a member of parliament, my role was very important as we had to negotiate for the people who were affected. Our stand was very firm that people who were affected should be rehabilitated first and then only development should go ahead.”

Another area that will be in focus for Priya is women empowerment. “Our party has been very vocal about women empowerment, we have always tried to uplift the causes related to women including the 33 per cent reservation in parliament. It's not been obtained yet but Congress party is the one who initiated it. The first thing that our manifesto says is that 33 per cent of the government jobs should be allocated for women, this will benefit a lot of women. Under the NYAY scheme, about Rs 72,000 per year will be again going to women’s account as a woman is the poorest of the poorest families. Again it's going to empower women as she is the one who takes care of the family. So every scheme you would look at is first focusing on empowering a woman and that is how we look at women empowerment”

Priya’s father Sunil Dutt joined Indian National Congress party in 1984 and was elected to the Parliament for five terms from the constituency of Mumbai North West. It is the same constituency from where Priya began her journey following his death in 2005. Is there any wish of her father that Priya wishes to fulfil? “One wish that my father always wanted to fulfil was housing for the people. It has always been his dream to provide the people in the slums with proper living conditions. I would really want to see this dream of his flourishing. And, giving people their homes is something I feel from the bottom of my heart,” says Priya.

And, would her brother be campaigning for her?

“I don't want my brother should hang around me when I am campaigning, I don't think that is right. He has his own work to do and I respect that. He is always there with me morally and emotionally. Sanju has also said, ‘whenever Priya wants me there for her, I will be there by her side.’ He will be a part of the campaign but I don't want him to be here from day one,” says Priya. When asked what are the things that she has learned from her brother, Priya says it is remaining strong throughout. “I love his strength. I have great admiration for him because he has gone through hell in his life, he's gone through the craziest ups and downs in his life and yet he has come out strong every time. I have learned a lot from him, his resilience and his will to survive… all this gives me oodles of strength and learnings,” says Priya who gets emotional as she adds, “So, the resilience Sanju gets from both my father (Sunil Dutt) and mother (Nargis Dutt).”

On striking a balance between her personal and professional front, Priya says, “During my first elections campaign, I was carrying my first baby. At that time also, I ensured to draw a balance in my personal as well professional life. Undeniably striking a balance is always difficult, especially now when my children are in their early teen years. Age of 12-13 is the time when children need the support and advise of their parents the most." Priya further gets nostalgic as she recalls how her father Sunil Dutt always stood by her and Sanjay’s side. “He would never miss the parents-teachers meetings. He would always support us and be there during our school functions. Since he did it, I'm sure I can do it.” Lastly, the politician adds, “I have been able to keep up to my personal and professional commitments only because of the support of my husband. I do get a lot of support from him and without his support, I could not have done what I have done and will be doing hereafter.”