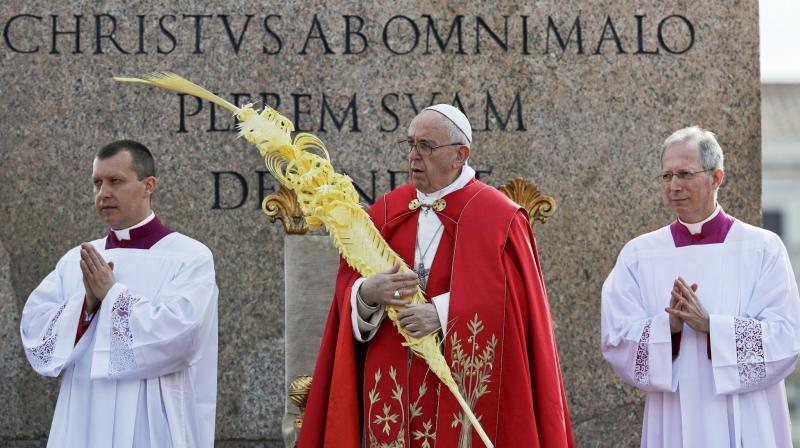 After the blessing, the pope, wearing red robes and cradling a braided palm, joined a procession to an open-air altar to celebrate Mass. (Photo: AP)

Vatican City: Pope Francis is marking Palm Sunday Mass in St. Peter’s Square, which is jammed with tens of thousands of faithful.

Sprinkling holy water, Francis blessed palm fronds and olive branches clutched by pilgrims, tourists and Romans. He watched from steps at the foot of the obelisk in the center of the square as prelates, holding dried, braided palms, formed a circle around him.

Palm Sunday ushers in Holy Week, which includes the Way of the Cross procession at the Colosseum to commemorate Jesus’ death by crucifixion. Several solemn ceremonies culminate in joyous celebrations on Easter Sunday as Christians celebrate their belief that Jesus rose from the dead.

After the blessing, the pope, wearing red robes and cradling a braided palm, joined a procession to an open-air altar to celebrate Mass.