A rendezvous with the Gandhi ladies 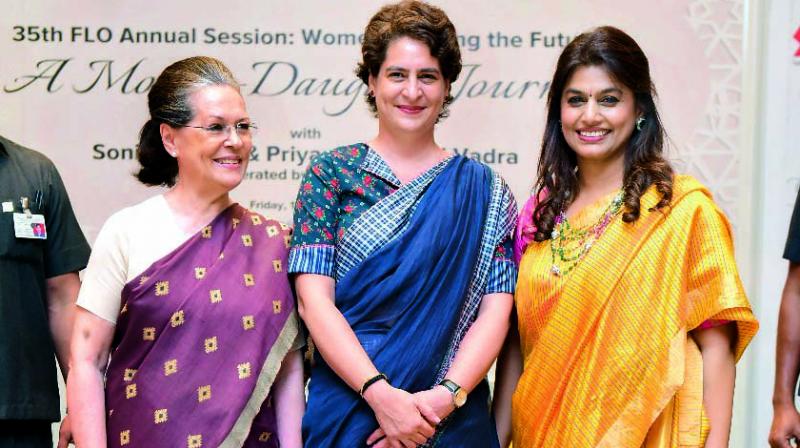 Sonia Gandhi and Priyanka Gandhi Vadra with Pinky Reddy, FLO’s national president for 2018-19, who hosted and moderated the event.

Pinky Reddy, National President FLO 2018-19, hosted the event ‘A mother daughter journey’ with Sonia and Priyanka Gandhi on Friday evening in Delhi. Six hundred women turned up, minus their phones and bags (for security reasons) to listen to the Congress leader and her daughter talk about their personal life, Rajiv Gandhi the husband and father, Indira Gandhi, dealing with tragedies and growing up Gandhi. They even posed with everyone who wanted a picture with them.

Watching Sonia and Priyanka open up to the audience and gracefully chat about their personal lives was a treat. Sonia Gandhi fondly recalled how it was her cravings for some Italian food in Oxford that led her to meet her future husband.

“There were no Italian restaurants, but a Greek eatery was serving a few dishes that were similar to Italian cuisine, so I went there. A German friend of mine was also there with my husband. That’s the first time he saw me and asked our common friend who I was.”

Rajiv Gandhi almost immediately knew he had met the “one” because he was soon writing to his mother Indira Gandhi, the then Prime Minister about Sonia.

When Indira Gandhi came to England to meet her son, she asked to meet Sonia and they conversed in French. While the Gandhis took a shine to Rajiv’s girlfriend and had no objections to them getting married, Sonia’s father did not feel the same. When she came to India for the first time, her father, “Bought me a return ticket back to Italy and made me promise that I would make no decision till I spoke to him first,” revealed Mrs Gandhi. But Rajiv was due to start his pilot training in Secunderabad and Indira was keen to see her son married before that.

The couple had no issues with this, but Sonia was not the one to break this news to her family. “They found out through the Italian radio,” she laughed adding her father was so upset about not being consulted by her that he refused to attend the wedding and only came to India to see his daughter after the birth of Rahul Gandhi.

Priyanka revealed, “They were so in love. Sometimes it would get embarrassing in front of my friends because dad was always hugging and kissing her.”

On Indira Gandhi
The thought of having Indira Gandhi as a mother-in-law can be very intimidating, but for 21-year-old Sonia, she became a mother.

Female empowerment is a normal, natural thing for Priyanka because she grew up in a matriarchal household. “My grandmother, the Prime Minister, was such a strong person, someone whom ministers, officers... All these powerful men were also looking up to her.” 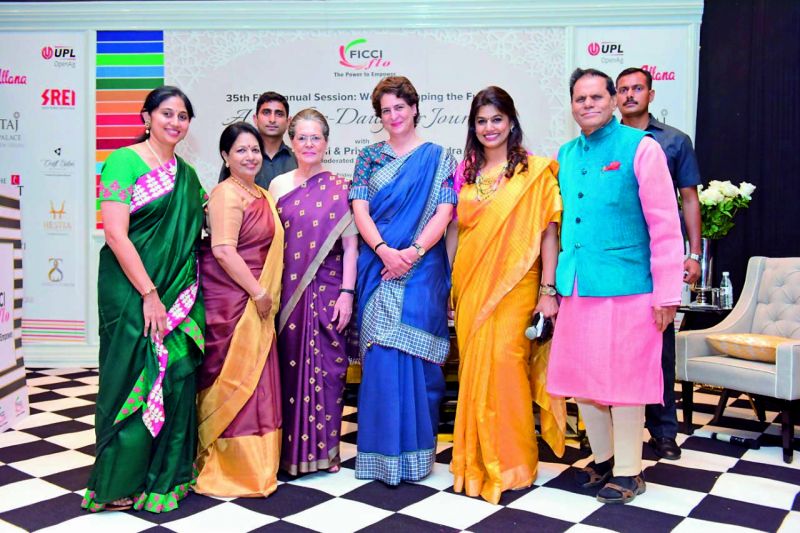 Sonia, the housewife
After Indira Gandhi lost the election, there was some upheaval as the family had to look for a new home to move into. They finally settled into a place owned by a friend, but  they had to struggle with staff issues. “For some reason staff were scared to come work for us,” says Priyanka. So, Sonia did the cooking.

Indira’s assassination
It was a happy, stable home till Priyanka was 12. After her grandmother’s assassination she says things changed. “We were home schooled after that. All our classes like riding, martial arts... came to an end, we were not even allowed to go to the same place more than a few times. It was isolating.”

For Sonia this assassination was doubly hard to cope with because she was the only one at home when Indira Gandhi was shot. “It was my mother who ran to her and took her to the hospital,” says Priyanka.

Rajiv Gandhi’s assassination and aftermath
It was Rajiv and Sonia’s strong marriage that ensured everyone at home coped with the tragedy. But Sonia was not happy about her husband joining politics because she was terrified that he too will be killed. Seven years later when her worst fears came true, it was left to Priyanka to break the news to her mother. “It completely broke her,” said Priyanka. 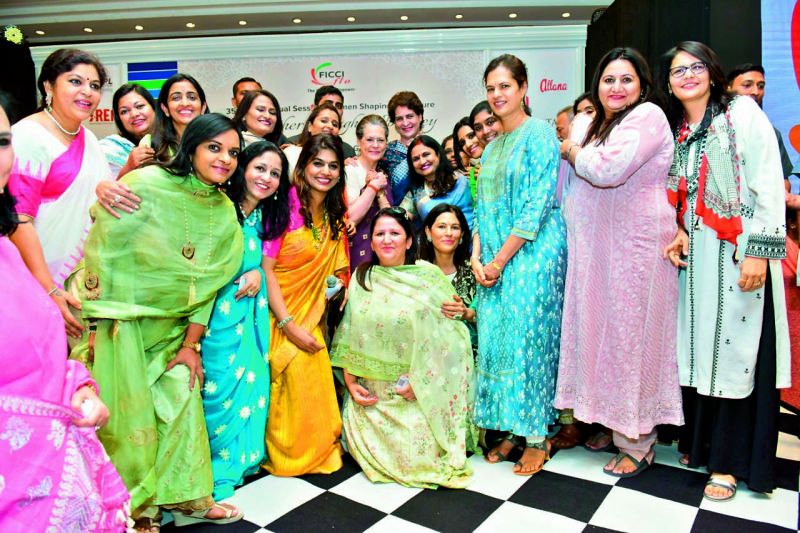 Members of Ficci FLO, Hyderabad Chapter taking selfies with Sonia and Priyanka after the event.

“I should have been looking after Priyanka but she looked after me,” reveals Sonia. For Priyanka, stepping up was the natural thing to do because her dad would always tell her and Rahul to look after their mother.

Meeting the assassin
For Priyanka the decision to go meet Nalini Sriharan, a conspirator in her father’s assassination, in jail was a life changing moment. “I went there thinking I could forgive her. But after meeting her I realised she was as much a victim of tragedy as I was. I was 19 when my father died, she was 23. She fell in love with the wrong person, got pregnant, was jailed for life and had her child taken away from her.”

Mother-daughter bond
“Priyanka is my best friend,” says Sonia. This doesn’t mean she does not play the mother card though, as Priyanka laughingly spoke about how her mum will still glare at her and Rahul when she feels they are not saying the right thing, or ask them why they have given their opinions at meetings (even though she took them there for their opinion) and comment on her dressing.

Priyanka’s style is casual and everything dressy in her wardrobe is courtesy her mother and husband. What is sweet is while she is critical of her daughter in front of her, when Priyanka is not around, she doesn’t shy away from telling people how wonderful her child is, as Pinky discovered when she went to invite her for the event.

Mum’s annoying habit
Priyanka’s pet peeve against her mum is the constant WhatsApp calling and not understanding that there is terrible signal. “She will just continue saying ‘Hello, Hello...’. She won’t understand that I can’t hear a thing.”

A private life
The Gandhi’s are not your regular Indian family, but  Priyanka says, you can be a public figure and lead an private life at the same time if you want to. “I go to the movies, to Khan market, everywhere and am not bothered.” Even social media is not an issue if your accounts are private she says.

An empowering affair
The members Ficci, Hyd Chapter, were delighted to meet Sonia and Priyanka

Kamini Saraf,
It was a beautiful event. The best part was, they were two power-packed women, who spoke like a mother and a daughter — no politics involved. It was very special, as you rarely get to see this side of a story from a very powerful political family. They were down to earth — the duo were making fun at each other.

Sona Chatwan
It was interesting to witness the mother-daughter relationship between Sonia and Priyanka Gandhi. Their relationship is very human, just like everybody else’s. They’ve stood by each other through thick and thin.

Priyanka Ganeriwal,
It was a privilege to be a part of an informal chat with the mother and the daughter wherein they shared with us the stories of their tragedies and victories. Their agreements, disagreements, and the impact that they have had on each other’s lives were brought out very beautifully.

Hina Srivastava
This one hour conversation that Pinky Reddy moderated was one that I will always cherish. They shared with us their childhood memories, strengths and challenges... Sonia said that balancing her personal and professional life was not a challenge and that she’d frequently go out to the movies and visit malls with her children. The duo met everyone with ease and shook hands.

Usharani Manne,
Sonia and Priyanka truly embody the mother and daughter relationship. Since I had always looked at them from the political perspective, this came as something of a pleasant surprise.
— As told to Swati Sharma