About Love: Against all odds

And soon thereafter, they filed a petition in the Kerala High Court for the same-sex marriage to be recognized under the Special Marriage Act. 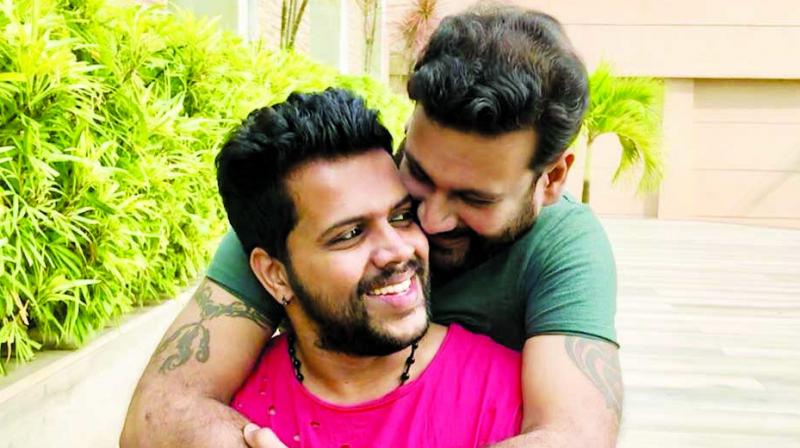 After spending days talking to Sonu M S on a dating app, Nikesh Usha Pushkaran finally set a date and met him in a restaurant in Kochi.

After spending days talking to Sonu M S on a dating app, Nikesh Usha Pushkaran finally set a date and met him in a restaurant in Kochi. “I knew I liked him when I met him,” recounts Nikesh about the first time he met his husband. After months of exchanging sweet nothings, the couple, deeply in love, eloped to get married in July 2018. The following decriminalisation of Section 377 two months later was the perfect wedding gift. “It was like a flightless bird has been gifted wings,” gushes Nikesh.

However, the couple, who made the headlines for being the first gay couple to get married in Kerala, faced a lot of obstacles posed by the prejudiced homophobic society. “Sonu’s family thought their son was suffering from a disease which can be cured,” reveals Nikesh about the time when his husband introduced him as his lover. “They took him to a psychologist, hoping to get him cured. Instead, the psychologist told the parents that homosexuality isn’t a disease,” says Nikesh. When the parents finally made peace with the couple on the terms of the latter maintaining their relationship a secrecy in the public eye, an uneasiness was gnawing at their hearts. Finally, one evening the couple decided to come out to the world. “While we received a lot of support, we also received death threats. Our families were repeatedly humiliated,” says Nikesh. But despite the rampant homophobia taking a toll on them, the couple decided to strengthen their fight against this discrimination. And soon thereafter, they filed a petition in the Kerala High Court for the same-sex marriage to be recognized under the Special Marriage Act.

“It bothers me that every time we go to the hospital, I cannot sign the paperwork as Sonu’s husband. I have to call his mother. Moreover, we can’t apply for life insurance as a couple, nor so we have any Property Rights as a couple,” says Nikesh. Adding further, he surmises the frustration when he says: “Quashing of Section 377 gave the homosexual couple right to conjugate but life is not just about sex. We are now recognized as humans, but we are humans without any rights. We deserve all the rights that heterosexual couples have.”