A sneak peek at the 29-day cultural extravaganza scheduled at the Kumbh Mela this year. 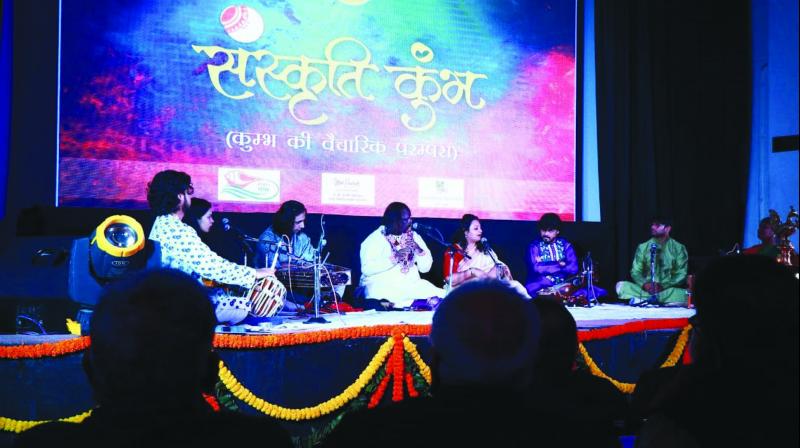 Apparently, Triveni was the brainchild of Padmashri Malini Awasthi; who straddles the world of authentic folk music with as much ease as that of classical vocal music.

It was interesting to see how an unusual collage of music, entitled Triveni, had been skillfully created at a recently held curtain raiser in Delhi of the cultural activities at the Allahabad (now known as Prayagraj) Kumbh Mela. Triveni represented the coming together of the three sacred rivers at Allahabad – the unseen, ancient Saraswati, the Ganga and the Yamuna. This was aurally depicted by the three genres of North Indian classical music coming together, culminating in all artists performing together. Appropriately, the ancient Saraswati, which is today tantalizingly hidden from view, was represented by dhrupad, the most ancient form of music, today indeed relatively rarely available to music lovers

Apparently, Triveni was the brainchild of Padmashri Malini Awasthi; who straddles the world of authentic folk music with as much ease as that of classical vocal music. The vocal tradition is, of course, considered the superior one; despite being a vocalist herself, Malini had chosen to try to give equal, if not more importance to the instrumentalists of each genre to raise their participation from being mere accompanists.  Thus, in the dhrupad presentation, Abhay Rustom Sopori played the santoor, of which he is said to be a 12th generation representative, accompanied vocally by young Milan Upadhyay with an equally long and distinguished musical lineage. It was perhaps surprising not to hear more familiar representatives of dhrupad but the inclusion of Milan, a rare female practitioner of dhrupad was praiseworthy.  On the pakhawaj was her brother Rishi Upadhyay. The duo presented compositions in “aditaal” (8 beats), then in a 5 beat cycle composed by Abhay, dedicated to the Goddess.

Khayal was presented next; again the seniority of flautist Pt Rajendra Prasanna exceeded that of the vocalist, Smt Meeta Pandit, of the renowned Pandit family of the Gwalior gharana. 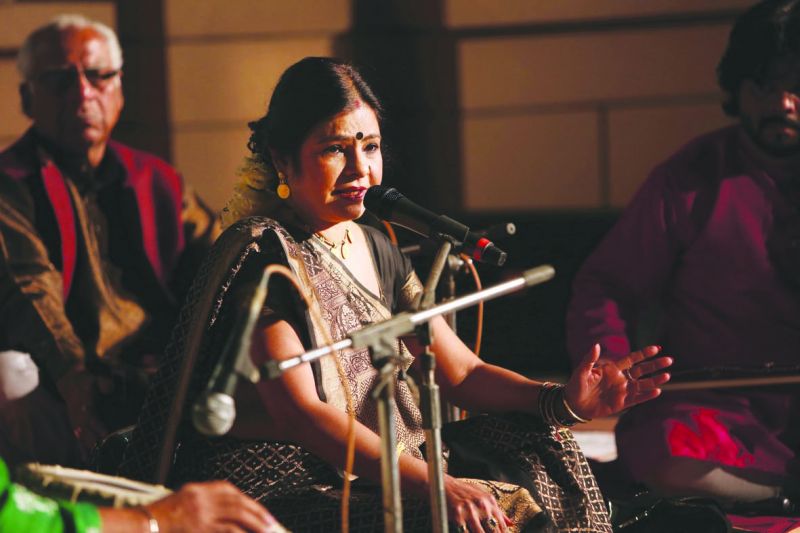 The duo sang in perfect unison, jointly bringing out the devotion in the lyrics. Appropriately, the lyrics of the composition in Raga Yaman related to Lord Shiva, from whose tresses the river flows on to earth; the taal was ektaal, 12 beats. On the tabla was Abhishek Mishra of Banaras.

The third river Yamuna has always been associated with Lord Krishna, who spent his childhood by its banks.

Thumri as a genre has many compositions dedicated to the Lord; it is also the youngest of the genres, as indeed the Yamuna is regarded as the youngest of the three rivers. Singing the beautiful, immortal thumri “jamuna kinare mera gaon” was Nitin Sharma, an able disciple of Pt Ajay Pohankar; on the sarangi was the redoubtable Ustad Murad Ali Khan. Making the point quite distinctly, that Ustad Murad Ali Khan was not merely an accompanist, was Paromita Chatterji on the harmonium. sThe 9 musicians then all sang “chalo man, Ganga Jamuna teer” in unison; indeed a celebration of the “Vaicharik parampara of the Kumbh” as the event was entitled. The duration of the Kumbh Mela will see much classical music and dance performances; apparently, 5 stages have been constructed at different venues where the best traditions of the country will be showcased. Obviously, the talent of Uttar Pradesh will be highlighted, with qawwali, folk artists, dances, classical music and theatre all finding platforms; there will be concerts every day. Special emphasis is also being given to the culture of the North East states.  Care is being taken not to have performances on the key “snaan” (bathing) days, which will see a huge crowd. Some of the artists expected to perform include Pandits Rajan Sajan Mishra, Smt Hema Malini, Nooran Sisters, Raja Radha Reddy, Shekhar Sen, Anuradha Paudwal, Ravi Kiran and Suresh Wadkar.