Nupur Patny’s Project, It’s Not My Fault enables victims of sexual harrasment to share their stories. 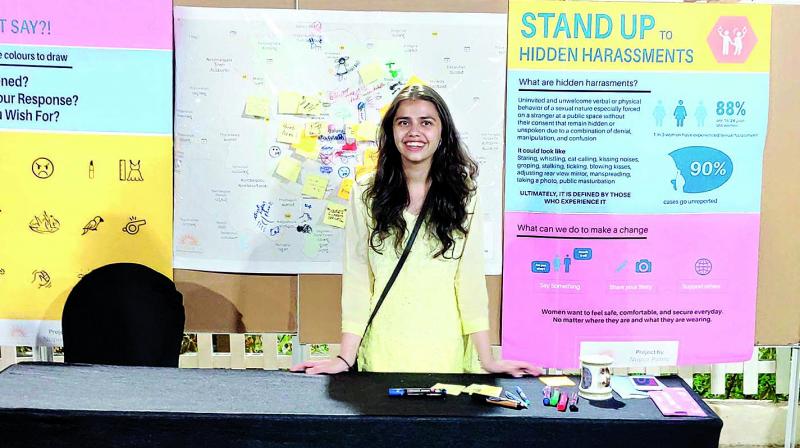 When you want to do something amazing, all you need is a trigger and a little bit of motivation. For Bengaluru-based student Nupur Patny, a spark was all that was needed. It set her on the path to make the city a little safer for women. Her ‘It’s Not My Fault’ initiative started as a school project that quickly became a platform for women to share their stories of subtle sexual harassment. In a candid chat with us, we find out the entire story...

As part of her academic project, Nupur was asked to design something that will be socially beneficial. She shares, “I took up women safety which was fueled by my own experience at Kempegowda Metro Station where I was stared at and followed by a group of men. This incident pushed me to look at subtle sexual harassment.” Though she is originally for Mumbai, Nupur studies here in the Srishti School of Art, Design, and Technology.

Talking about the kind of research that went into —

It’s Not My Fault, “I looked into a lot of qualitative data from reports to understand the current situation. And focus was on subtle harassment only in public transits,” she shares adding she also spoke to a number of women to collect their stories.

During this process, Nupur realised the entire dynamics of women’s safety and also that women were open to sharing stories when they find connectivity. Nupur adds, “Talking to them, I realised that I could create a space where they could share their stories and connect  with other women.”

During the developing stages of the project, Nupur put up a physical map of Bengaluru at a women’s conference where she invited women to mark particular places of harassment on the map. Explaining in detail, “I asked women to describe the event or put it in drawing on the map at the place it happened. I wanted to see if they could reflect on the change they wanted to see. Further on, I wanted to do the same and put it on a digital platform. They can come on to the platform, share and pinpoint where the incident has happened, “ she shares adding that through the name of the project, she wants to move away from victim-blaming and make it more empowering.

The 21-year-old who is an avid traveller and dancer shares that she has also spoken to the police who are interested in the data that comes directly from the victim. Using this data, they can take preventive measures. Talking about her future plans for the digital space she shares, “Since this is the first prototype that I have developed, the scope of it is to look into different types of subtle harassment. And also understanding how everyone including men and the perpetrators will use this data. I want to work with women organisations for this.”