Tabla maestro Zakir Hussain talks about his protégé Marcus Gilmore and how their interactions brought a new dimension to his music. 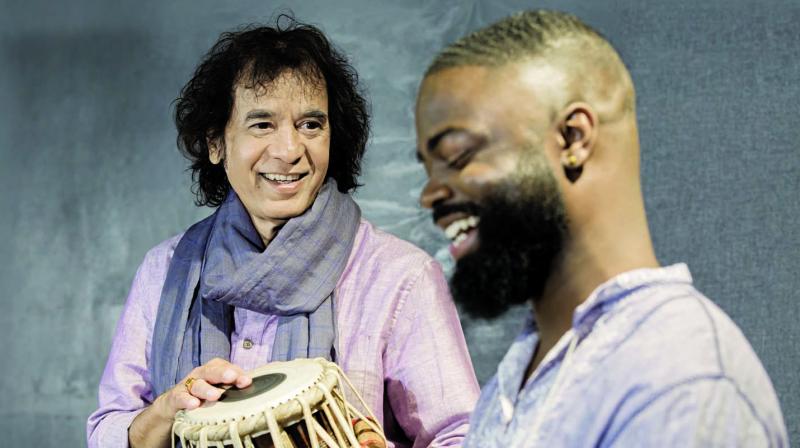 For Padma Shri and Padma Bhushan awardee Zakir Hussain, who grew up in Mumbai surrounded by tablas and rhythm, the transmission of knowledge is both ways. “Even if it is a teacher teaching a student, there is something about the teacher learning how to articulate different minds,” says the virtuoso as he looks upon his protégé, jazz percussionist Marcus Gilmore — grandson of noted Jazz artist Roy Haynes — with a sparkle in his eyes.

Under Rolex Mentor and Protégé Arts Initiative, Gilmore has not only been enhancing his percussion skills with Hussain for the last two years, but has learned the way of life that an artist should lead to be able to transform into their art.

According to Hussain, the only thing that guides an artist is their art, most of which one can learn by being a fly on the wall. “As a talented upcoming student of art, you learn a lot by just being around great teachers when they are discussing music. It allows you to understand the depth of what you are doing and what kind of reverence it requires,” reckons the tabla maestro, looking back at his childhood days spent around his father and his students. An experience he finds similar to Gilmore, who wasn’t handheld by his grandfather but drummed his way to the top. “While I was defenseless in his arms, he played rhythms in my ear. But once I was able to get myself out of his lap and put that on something, he left me to figure it out. So between the ages of three and seven, I had no father or guru teaching me. I had to figure my way out on everything. His students occasionally showed me something and that’d be it,” shares the Grammy-winning artiste.

A narration akin to India’s guru-shishya parampara (teacher-student tradition), Hussain agrees that while the relation still exists the definition and ways of it have changed. “In those days, gurus were more teachers than performers, so they did not need to travel. Even if they did, the shishya (student) travelled with the guru (teacher), that way the leaning was constant. But in today's time, it is challenging,” rues the 68-year-old, who took Gilmore to Punjab to show the American drummer his lineage.

Reminiscing the guru-shishya culture from the time his father welcomed students from all over the country, making them stay at home and providing food and shelter, Hussain says, “When I was eight, a garage below our house was converted into a room for five-six students to live. My mother would cook for them and take care of them. They would practice and sometimes, when he felt like, my father would descend. So, there was a constant correction, even though not hands-on. And at times they would come up after lunch and sit with my father, and there would be stories and music.”

While the digital age allows for all information to be available on the Internet for the present generation, Hussain notes that there is a lack of hands-on experience that comes from having played while learning. “When I was 15-16, we struggled to find an LP of a musician. We had only the Rhythm House and had to request them to get us that, which took months. So when I went from India to the western world, even then though I knew things, I had no way to transverse through it. I had to learn anew,” he says. Something that he finds interesting in Gilmore owing to his ability to decide the music pattern.

And for someone born with the knowledge of music ingrained in their DNA, Hussain applauds Gilmore’s understanding of tabla vocabulary, grammar, and language. Indicating that they both have the same level of intuition about rhythm and grammar. “When you meet someone like that, the conversation is much more familiar, full of expression and instincts that it allows one to grow in so many different directions,” explains the composer, who has all praise for his protégée for having translated notes on the drum with ease. However, Gilmore begs to differ. “It was challenging. Transforming that language (of tabla) to this instrument (drum) was tricky because it is not made for this instrument. Certain things articulate into micro notes with your fingers on tabla, and to get that on the drum set is tricky,” shares Gilmore, who came to Hussain with a head full of questions on music, but instead chose to observe his life as a person. “I found that how graceful the virtuoso is, in everything. Music of course, but also just the way deals with life. Things don’t go the way you want them to go, there is a way to handle a situation to keep the flow going,” he adds.

Hussain’s learning from the drummer has enriched him and brought a new dimension to his music. He explains that when an artist interacts with someone new, they get to see their art through the eyes and ears of others. “I have learned a whole different vocabulary and language of rhythm. By playing with him I have found a little different way to sway with my rhythms, not an addition. He also taught me how the drummer of his generation thinks about rhythm. Therefore, he has given an insight on how I must interact with them, and develop a way of speaking that will be familiar to them,” smiles Hussain, adding, “I have more respect for the world of jazz. To see that world through the eyes of a fellow percussionist is a different view. I find it invaluable,” he signs off.