A dance festival is all set to celebrate the 50 glorious years of NCPA with stellar performances by eminent choreographers. 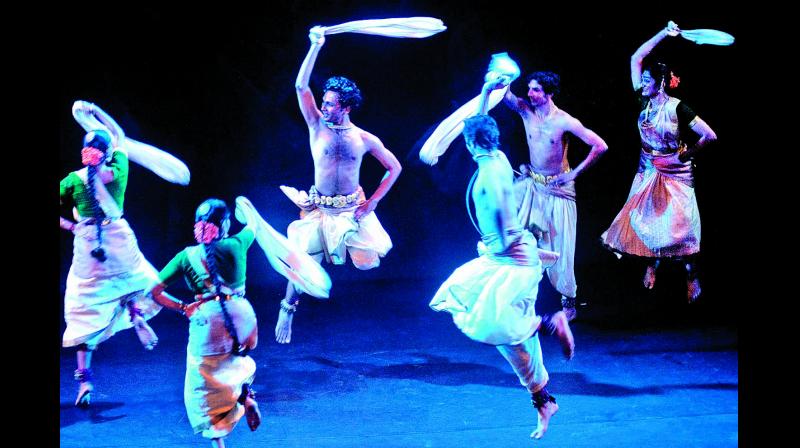 The foremost cultural institute of the city, the National Centre for the Performing Arts, has entered its 50th year of celebrating and promoting various art forms. And to commemorate this feat, the centre has organised a three-day dance festival called the Nakshatra Dance Festival, bringing under one roof, exponents of Bharatnatyam, Kathak, and Odissi. The festival will feature innovative group choreographies by eminent choreographers such as Ranjana Gauhar and troupe, Saswati Sen and troupe, C. V. Chandrasekhar and troupe, Rajashree Shirke & troupe, and Nandini and Sharada Ganesan.

For Swapnokalpa Dasgupta, Programming Head of Dance at NCPA, this festival is a tribute to the versatility of classical dance forms. “We have dance-drama (Chitrangada based on Rabindranath Tagore’s creation), dance with spoken words  (Ravan Mandodari Samvaad) dance and Vastu Sastra (Panchamabhootam by C. V. Chandrasekhar & troupe) and of course the nazakat of Kathak in Bollywood,” elaborates Dasgupta. For the first time, NCPA has weaved together exquisite choreographies of Pt. Birju Maharaj that have been used in Bollywood.

The show began with Chitrangada,  an Odissi performance by Ranjana Gauhar and troupe, followed by Sharada and Nandini Ganesan’s depiction of Urjaa through Bharatnatyam. “When we were informed that our performance would be the opener, the first thing that came to my mind was that it has to be something powerful. And strangely enough, I was working on this particular production with my team called Urja, which means energy,” reveals Nandani who was elated to have performed at the 50th year.

The aim of the performance, as the dancer explains, was to educate the audience in a very philosophical way about the existing energy within each of us. All one has to do is to tap into it to release it. “We spoke about lord Shiva as the form of energy and when he and Parvati get together is when the entire cycle of life takes place. So starting with energy and then talking about how we can use this to reach our aesthetic high, is how I connected the two,” she adds.

Rajashree Shirke’s popular dance piece Ravan Mandodari Samvaad is making a comeback and will open the second day of the festival. Describing her piece as a Katha Kathan — an experimental theatre format emphasising the Natya element of the story-telling art form, from the temples of Northern India — the presentation is a dialogue between Ravan and his wife Mandodari on the battlefield. “Mandodari warns Ravana that abducting another’s wife is an unethical and immoral act that would have severe consequences and would surely spell his end. Ravana mocks her, saying that such requests reek of cowardice and weakness as a woman. What ensues is an epic battle between Rama and Ravana, where Ravana meets his end. Mandodari cries out, seeing her beloved husband’s corpse,” explains Rajashree.

For both Nandini and Rajashree who have been regulars at NCPA since their childhood, soaking in the nuances from performances of veterans, it is a matter of pride to have performed on its 50th anniversary. “My first solo performance was at the Godrej Dance Theatre somewhere around ‘85. Since then, there has been a lot of development and improvement with the mixed bag of artists coming,” says Rajashree.

As for Nandani, one of her goals as a kid was to perform at the NCPA and she is elated to have achieved it. According to her, it is a treat for an artist to perform at this cultural institute. Narrating an incident that became the stepping-stone of her journey, she says, “My mother made it a point to take me to every performance in the city. She idolises Chitra Visweswaran and in the 90s, she once came to perform at the NCPA and did a piece of Stree Sakti. My mother told me how I sat down to watch the performance in complete awe and wished to dance like her. Chitra Visweswaran became my guru later.”
—Today and September 26, At NCPA, Nariman Point