Still a long way to go

Across the country, members of the LGBTQ+ community celebrated this historic day as they were at last freed from the criminal tag. 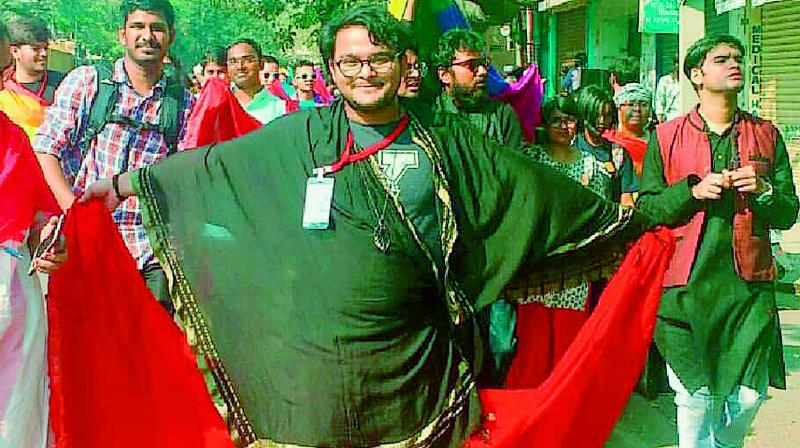 Sagnik Puri, who identifies as a Trans, during a pride parade in the city

Even as members of the LGBTQ+ community celebrate the end of a section of Article 377, they are painfully aware that a lot more needs to be done to gain true societal acceptance.

The streets of India exploded in rainbow colours, as people rejoiced the landmark judgement ending a section of the draconian Article 377 which criminalises homosexuality. Across the country, members of the LGBTQ+ community celebrated this historic day as they were at last freed from the criminal tag. Yet, amidst all the celebrations, one cannot help but wonder if life is going to become any less difficult for sexual and gender-based minorities.

While legally, the Constitution may have become more inclusive, the society continues to discriminate against them as it has done for decades now. As we listen to living testimonies of the violence and discrimination that defines the fear and hatred towards sexual minorities, it becomes amply clear that the next step towards an inclusive society is educating and sensitising it.

Sagnik Puri, a student who identifies as a trans person, explains how discrimination is rampant even in spaces that are considered ‘progressive’. “There is not a single day that I have not been discriminated against, ridiculed or harassed by people around me because of my sexuality. I was raped last semester and all the university did was to place hindrances in the path of justice. I have faced homophobic and transphobic comments and innuendos from the ‘progressive’ people on campus. My professors do not let me speak in classes anymore, stating that I would disturb the education of my fellow students,” says an anguished Puri.

Likewise, instances of harassment in our ‘friendly’ neighbourhood reminds us that a legal amendment may promise to save one’s rights only in court — the hindrances faced while getting hired, looking for a house on rent, or just taking a walk in a public space with your partner without the fear of getting harassed are still far-fetched notions.

Trans activist Rachana Mudraboyina says, “The amendment merely rubs off the ‘criminal’ tag. The fight ahead is to change the mindset of the people towards sexual and gender-based minorities. For example, I am in a live-in relationship with my partner. The area that I live in is obviously uncomfortable with this set-up. Considering that I am an activist, I do not face the brunt of the harassment as much as my partner does. Very often, they do not say things to us directly, but they end up tinkering with my partner’s bike.”

Designer and LGBTQ+ activist Ganesh Nallari, on the other hand, explains how an individual’s social standing plays an important role in the discourse about societal discrimination and harassment.

“To be honest, discrimination while being hired or looking for an accommodation is not such an issue in urban, upper-class settings. It is the lower-middle class that primarily faces the brunt. But we can’t really generalise,” he says, adding, “The only way to tackle this is by sensitising the people to open up the floor for discourses. Right now, just because the law has been struck down, a lot of people who are uncomfortable with the concept of homosexuality have to forcefully accept it because the court said so. But what we really need is to educate the people and explain that homosexuality is not an abnormality, we aren’t abnormal. This is going to take time; it won’t happen in a single day. We are in for the long haul.”