Haryali Teej 2018: Here's all you need to know about monsoon festival

The festival is widely celebrated by married Hindu women in Northern and Western parts of India to pray for well-being of their spouses. 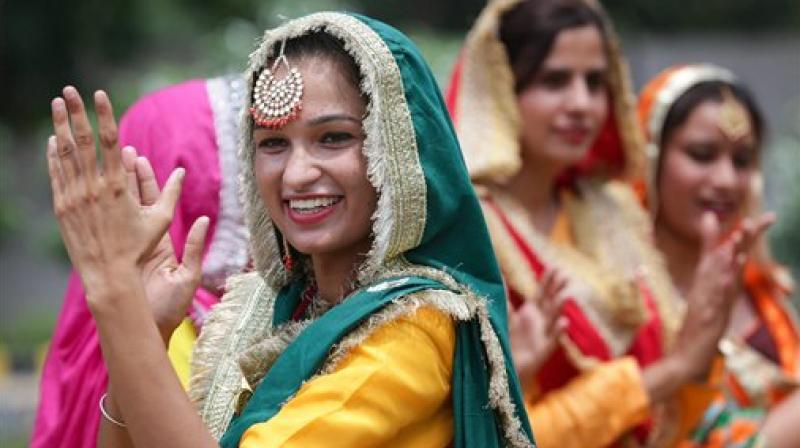 The day also celebrates the determination of Goddess Parvati who took 108 re-births until Lord Shiva gave in to her dedication and tied the nuptial knot with her. (Photo: AP)

New Delhi: Alka Gupta looks her festive best as she sits on a swing adorned with flowers, her happiness is evident after being crowned 'Miss Teej Queen' at an all-ladies event at a locality in Kanpur. Alka's delight is part of a larger picture wherein Indian women are adding a modern twist to the traditional festival of 'Teej'.

"I have been crowned Miss Teej Queen here. All of us are celebrating the festival of monsoon in traditional attires and with henna on our hands," says Alka with a bright smile.

The organiser of the event, Jyoti Shukla, laments the loss of traditional values, "I noticed that people don't know much about our age-old traditions, and so I decided to plan this event. Many competitions for participants have also been organised along with fun titles."

Alka and Jyoti are joined by many others for whom 'Teej' is no longer just a day to fast for their better-halves, but is also a day to venture out and have some fun.

Also called 'Hariyali Teej', the festival is widely celebrated by married Hindu women in Northern and Western parts of India to pray for the well-being of their spouses. The word 'haryali' means greenery and represents the monsoon season, a time when downpour brightens up the surroundings.

The day also celebrates the determination of Goddess Parvati who took 108 re-births until Lord Shiva gave in to her dedication and tied the nuptial knot with her. Many believe that on this day the Goddess declared that fasting and performing certain rituals will bless women with a happy married life.

While the way of celebration may vary, there are certain things without which 'Teej' is incomplete.

Green all the way!

From green bangles to green sarees and suits, as the name suggests, 'Haryali Teej' is all about the colour green! Women dress up in traditional attires and get together to ride swings and to listen to old folklores of Lord Shiva and Parvati.

Applying Henna or Mehndi is a common ritual followed by women on most festivals as it not only adds to the beauty but is also considered a 'shagun' (sign of good luck). On 'Teej' too women flock to markets to get beautiful henna designs on their hands, the darker the colour the better it is!

What gujiya is to Holi, ghewar is to Teej! Ghewar comes in different varieties and is the most commonly savoured sweet on the day. Other sweet delicacies made on this day include kheer, malpua and halwa.