Creators are harnessing the positives of Instagram to present often-ignored micro-narratives, in quirky, captivating formats. 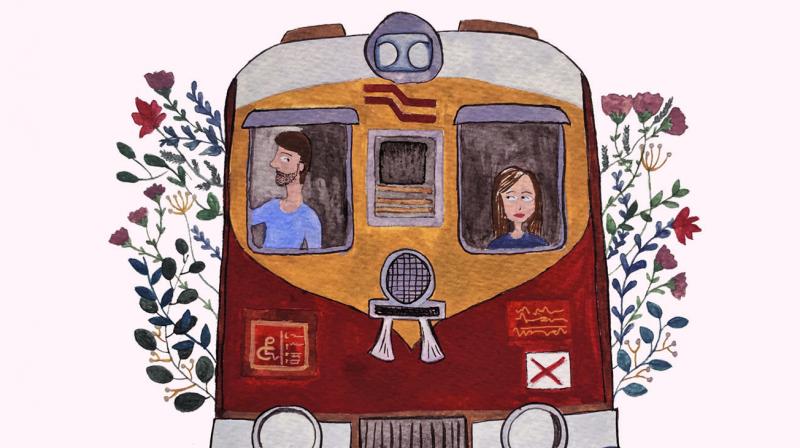 ‘Agla Station’: The Pao of Love

Melancholic pencil strokes give shape to a stark room, populated only by a chair, pair of shoes, bed and a figure sitting on it. The monotony of the monochrome interior is broken by a single window, which brings into view a riot of colours of the outside world. But hidden from this vibrant world are the writings on the wall, which isn’t for all to see but the solitary figure perched on the bed. ‘Faggot’, screams one word, ‘chakke’, calls out another. For 24-year-old Siddhanth, who identifies as gender non-conforming, and pansexual, this is what their ‘closet’ looks like.

The eponymous Instagram handle of the Almaarii project is populated with several such illustrations that physically manifest closets belonging to people of South Asian origin who place themselves on the LGBTQI+ spectrum of sexual and gender identities. The posts bring into sharp focus a very specific slice of a person’s life – a micro-narrative of sorts – that amplifies a voice and an experience that is otherwise lost in the grand narratives that abound.

The Almaarii project is one among the few Instagram projects that are choosing to train their eye on often-ignored narratives. And this comes as a welcome change to the social media user, as the space often tends to be overrun with information, experiences and opinions that subscribe to or stem from mainstream conversations. The creators of these maverick Instagram projects are harnessing the positives of the platform to shift the focus onto obscure experiences and conversations, no matter how fleeting, and are marrying visuals and the written world to give shape to them. Additionally, by taking advantage of the democratic nature of the Internet, they are using social media platforms to source these narratives as well, so that stories even from distant corners of the world can find their way into the creator’s inbox.

A room for all to see

Twenty-four-year-old Pooja Krishnakumar, who co-founded the Alaamrii project with her partner, Teenasai Balamu, says that the idea to create the project stemmed from the realisation that the ‘closet’ was a very Western concept given to queer individuals in South Asia to describe the feeling of a hidden sexual identity. 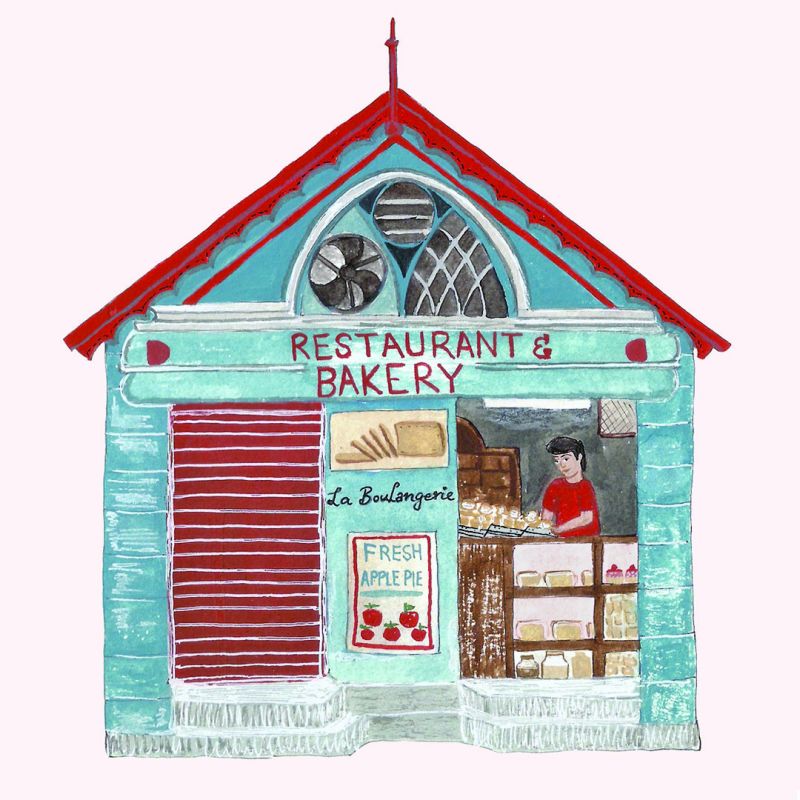 Illustration from The Pao of Love

“Also, for many of us, our 'closets' actually exists, like our own rooms, which are safe spaces for some, or a space you just want to get out of for others. So, I wondered what the physical manifestations of these closets would look like,” shares Pooja.

After an Instagram poll, Pooja decided to choose the name ‘Almaarii’ for her project, as the word rings a bell across South Asia. The project has received entries from India, Pakistan, Bangladesh and Sri Lanka and all of these have been collected via personal messages on Instagram, a Google doc shared on the platform or via email.

“Like any marginalized community, even the queer community has a very set number of people who are kept as spokespersons for them. Because of these louder narratives, a lot of narratives that cannot be in the same space at the same time get sidelined,” explains the sociology and anthropology student, and adds, “Currently, Instagram is one of the best spaces to be queer in the digital space. Its format makes it easy to navigate, receive, and present information. It’s a great mobilising space.”

Our idea of love is characterised by grand gestures – the teary-eyed proposal in the rain, the running to catch a train, a cacophonous baraat or sweaty, passionate lovemaking in the dark. But real-life love can be flourish in stolen glances, bungled sentences, a hesitant touch or a hasty kiss on a relative’s couch.

The latter variety is what ‘The Pao of Love’ - an Instagram project that focuses on the fleeting moments of love that abound in Mumbai - brings to life. “We always believe that an experience may come and go in your life, but there’s always something you take away from it. That's why we chose to focus on these blink-and-you-miss-it moments of love, rather than those big, epic incidents, like marriage, divorce or the first kiss,” shares Benita Fernando, who co-founded the project with Kusumita Das. “It’s the kind of stories that are often exchanged, but are forgotten. We wanted to create a place where these stories gain some form, go beyond the verbal and are preserved somewhere,” adds Kusumita.

The project, which puns on the word ‘Pao’ and also pays homage to the culinary offering that is ubiquitous in Mumbai’s street food scene, presents illustrated representations (made by the project’s official artist, Sairandhri Raut) of these fleeting experiences of love. The post is also accompanied by a 200-word write-up that packs in context, emotion, humour and a punchy punch line. Contributions that make up this medley of love stories have been sourced mostly through the online space.

Though their nascent project has received a lot of positive feedback, the creators share that it takes a lot of thought and work to get their project to standout. “When it comes to micro-fiction or storytelling on Instagram, which was pioneered by the Humans of New York handle, people have come to expect a certain format. Our challenge was to break away from it and not stick to the smug, sentimental tone that such micro-narratives tend to have,” reveals Kusumita.

Twenty-three-year-old Maitreyi Bhatia found herself thinking about the opinions people would voice if they were sure that they would not be judged. And so, the psychology-lover and artist took to Instagram to find out. She put up a post on Monki Business, her Instagram handle, asking people to share their most controversial opinions, and assured them that it wouldn’t be met with disgust, judgement or condescension. The replies that poured in were as captivating and varied as sunsets. 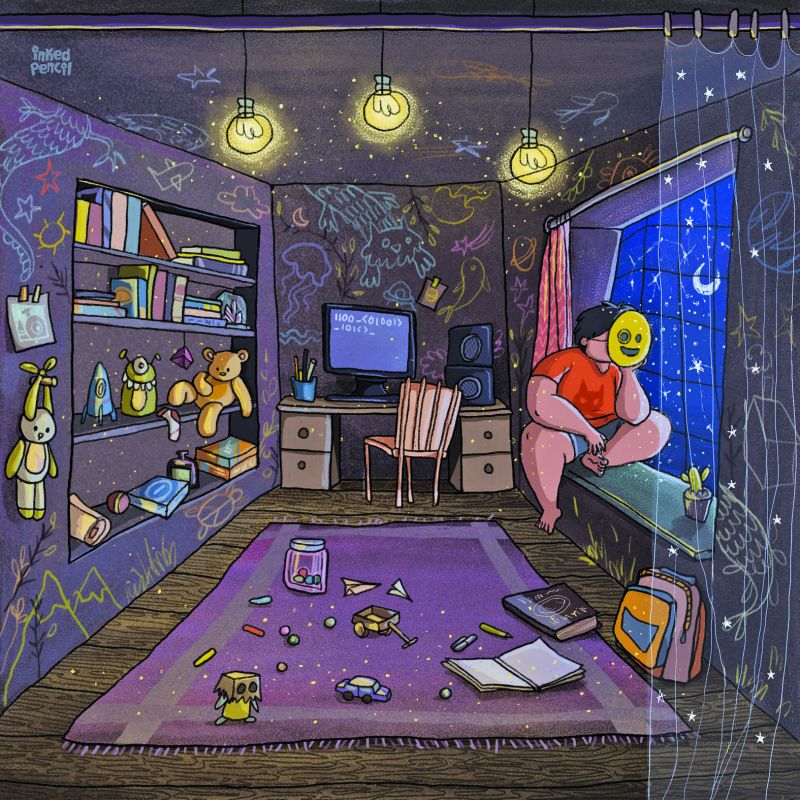 ‘Haze’ from the Almaarii Project

“Incest is fine as long as it’s consensual sex between two adults’, was one opinion, another came from a woman who hated the Me Too movement for various reasons, another felt that monogamy was overrated, while yet another disclosed a homophobic predisposition. All opinions were collected via a Google form shared on Instagram and answers were given anonymously. Maitreyi has compiled all these opinions into a zine titled ‘Controversial Opinions’, which includes illustrations and texts.

“This project has been cathartic for a lot of people. Also, since I have highlighted 'controversial opinions' or opinions we usually keep to ourselves, people have reached out to me saying it has helped them become more tolerant as that they don't argue with people who hold contrasting opinions as much as they used to,” shares Maitreyi.

When asked why she chose to use Instagram to source these narratives, Maitreyi talks about the anonymity and reach the platform provides. “It makes it easy to share and collect difficult narratives, ones that are silenced otherwise,” concludes the artist.