Ode to the Blue Collars

The sculptures are in Valay’s signature style of welding stainless steel discs together to create life-size installations. 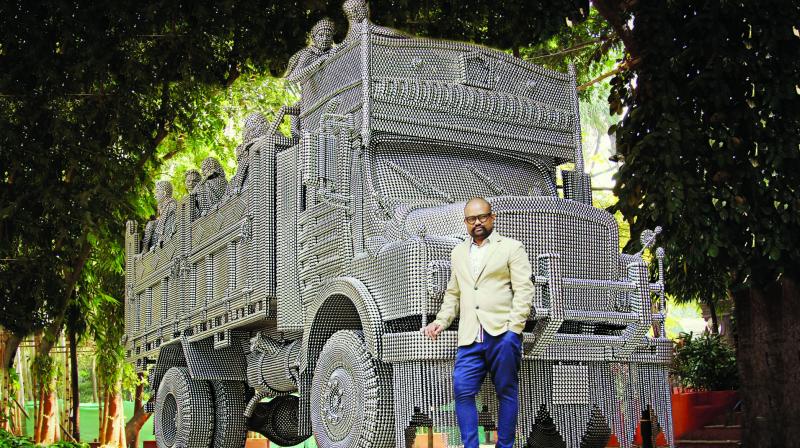 In the coming days, the mall-goers of Palladium are sure to be struck by an unusual sight of a herd of buffaloes in the middle of the mall. Although, it would be far from bizarre, as these life-size buffaloes are in fact a part of a sculpture exhibition called Spirit of Mumbai. As the name suggests, the upcoming exhibition by the well-known Mumbai-based sculpture and visual artist Valay Shende is an ode to the complex relationship of the working class population with the concrete urban jungle.

The herd of buffalos is in fact called the Buffalo series that attempts to personify the struggles of average Mumbaikars with the city. As unorganised and chaotic a herd can get, similarly the Mumbai city can also cause that confusion for its working-class residents. Explaining the metaphor, the artist says, “The Buffalo series is about the unplanned rapid urbanisation and development of Mumbai. Even though we pay taxes, we still have bad roads and bad infrastructure. It’s like how you experience buffalos and cows standing in the middle of the road, creating traffic.” 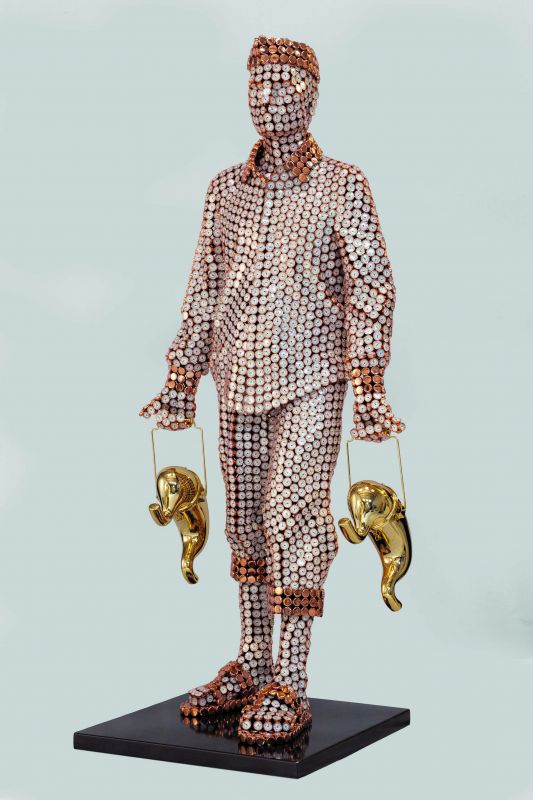 The Spirit of Mumbai will have six sculptures in Valay’s signature style of welding stainless steel discs together to create daunting life-size installations. One that had caught attention at previous exhibits was the sculpture of dabbawala made out of thousands of wristwatch cases. Talking about why he chose the iconic community of Mumbai that is on the verge of extinction, the artist says, “They have made a big contribution to the city for more than a hundred years. These sculptures are also about labourers.” The essence of dabbawalas’ contribution gets starkly highlighted as the artist replaces tiffins for stomachs in their hands.

In another overwhelming carving, the artist’s tribute to the working class becomes apparent. Transit is a life-size installation of a truck that’s carrying labourers. “Transit is about migration and labourers. It’s a tribute to them because they have a big contribution in building this city and are eventually forgotten,” says Valay, adding that he replaced the rear-view mirrors for screens that run a video of an actual journey on the city’s road. “I hired a similar size truck for a day and filmed the entire city, especially the under construction areas at the time — Bandra Kurla Complex and the areas with the construction of the Metros. I used this video along with the sculpture to say that on one hand development is going on while on the other, there are people in the truck in whose life there are no changes,” he reveals.

For the artist, who is an ardent observant of the society, the urban struggles become core to his works. In a bid to reflect society, he uses reflection as a starting point of the conversation. His stainless steel discs that strip downs the figures to atoms and molecules are also made to shine so that the spectators can see their reflections in them. “Human beings and human behaviours are the centre of my artwork because their behaviours are a reflection of what culture they follow. I really want the spectators to be a part of the whole process. I am taking these issues and representing them in my own ways. So I really want to involve people. It’s so shiny because I want them to see their own reflections,” says Valay.

Hence, his attempts get perhaps the most dramatic in a sculpture called Virar Fast. The installation, which describes the scene of a crowd of over bourgeoning commuters that are hanging out of the doors of the Virar fast local train, is, in fact, an ode to the time when he was struggling. “In my days of struggle, I used to live in Virar and commute for two hours. It’s my own story, it’s the life of a common Mumbaikar—it’s horrible.  It’s hard to explain unless and until you have had that experience,” he signs off.

The exhibition will be open for viewing at Palladium from June 15 till August 18.