At the 63rd National Film Awards, Mithila Makhaan, directed by Chandra, won as the Best Film in Maithili language. 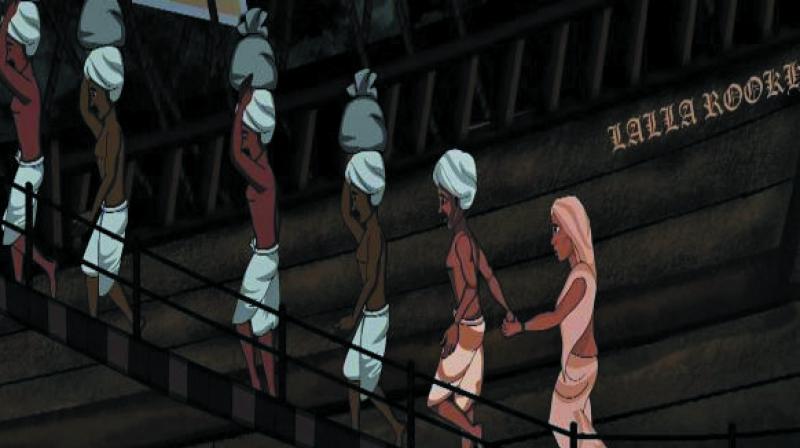 A stil from animation video Girmitiya Kantraki which tells the painful story of indentured labourers from Bihar and Uttar Pradesh, who were taken away overseas by colonial rulers to work on sugar plantations. (Photo: PTI)

The painful story of “girmitiyas” — indentured labourers from Bihar and Uttar Pradesh, who were taken away overseas by colonial rulers to work on sugar plantations, has now come alive in a new animation video.

Titled Girmitiya Kantraki, the project features a song sung by an Amsterdam-based pop artist, whose great grandfather from India was also taken away as an indentured labourer to work in Suriname, then a Dutch plantation colony.

While there have been books published and documentaries made on the subject, this is perhaps the first attempt to narrate the story of the moving tale of ‘girmitiyas’ while paying tribute to their struggles, descendants of many of whom have achieved great heights.

The project was conceived by National Award-winning filmmaker Nitin Chandra, who did extensive research on the subject including the storyboarding for the animation.

“From mid-19th century to about 1920, millions of Indians, mostly from Bihar and UP were taken as indentured labourers to various British, Dutch and French colonies.

“This video pays tribute to all those who were taken away. And, also salutes their indefatigable spirit which passed on to their descendants,” Chandra said.

“In the video, Raj Mohan (artist) pays tribute to them by playing his own great grandfather, who was taken away to Suriname from Chhapra in north Bihar. “We have chosen Bhojpuri language for the song, because these labourers mostly hailed from Bhojpuri-speaking regions, and even after being uprooted from their homeland, they preserved their language and culture,” he said.

“Girmit” is a corrupt form of “agreement” — an agreement under which thousands of labourers were taken away by the colonial rulers to work in the plantations of Mauritius, Fiji, Suriname, Guyana, and Trinidad and Tobago.

“And, ‘Kantraki’ is the corrupt form of ‘contract’ under which these labourers were indentured through ‘arkatiyas’, Indian agents who would lie to them and trap them in a vicious cycle of exploitation in cahoots with the British rulers.

“In the video, Raj, wears an arm band, which carries the name of his great grandfather. We did the video shoot in Mumbai when he (Raj) was in India, and the setting depicts the harsh conditions they had to live in.

“But, while conceiving the project, we realised the story of girmitiyas has to be retold and capturing 1850s and 1920s, I thought it was only possible through animation,” the 36-year-old filmmaker said.

At the 63rd National Film Awards, Mithila Makhaan, directed by Chandra, won as the Best Film in Maithili language. The Patna-born filmmaker, now based in Mumbai, says the biggest challenge was to render the emotions of the characters depicted while using animation graphics.

“People’s idea of animation in India, is still very much that it a cartoon for children or that it is non-serious.

“But, we worked on reflecting the emotional contours on the faces of characters seen in the video, whether labourers climbing the ship that took them away, or their suffering while travelling through oceans,” Chandra said, adding, “the animation took two months to complete”.

The song’s lyrics also capture the pathos of the labourers — “Saat samundar paar karike, ek nava des ke sapna dekahike... Le gaye dur suriname bataiye ke (Across seven seas, selling a dream to us... They took us to far away Suriname). But, many of the descendants of indentured labourers rose high in life and became an inspiration for people. Sir Seewoosagur Ramgoolam, whose ancestors were taken away from Bihar, went on to become the first prime minister of Mauritius.

He was also a freedom fighter there and his bronze statue was unveiled by his son, Navinchandra Ramgoolam, also former Prime Minister of Mauritius, in Patna few years ago.

Bihar chief minister Nitish Kumar recently attended a luncheon hosted by PM Narendra Modi in honour of current Prime Minister of Mauritius Pravind Kumar Jugnauth during his India visit. Kumar had described the ties between Bihar and Mauritius as an “emotional bond”.

Raj Mohan himself is now an accomplished artist. As a singer and poet in “Sarnami-Bhojpuri language” he travels to Suriname, French Guyana, South Africa, Maritius, India and several European countries to perform.