The ancient perfumes of Cyprus

Even before becoming famous as the birthplace of the love goddess Aphrodite, Cyprus was known for its superior quality of perfumes. 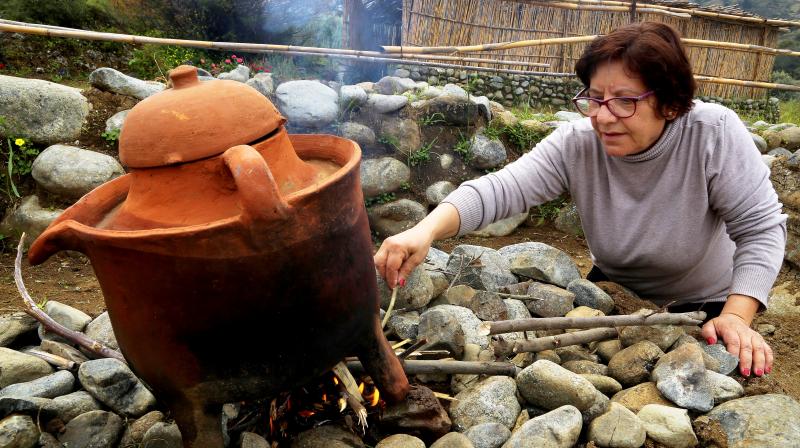 Yiannoula Lazarou tends to a fire boiling perfume inside a second millennium BC distiller discovered in Cyprus at the ancient perfume theme park and museum in Korakou, Cyprus. (Photo: AP)

Korakou: Before Cyprus gained fame as the mythical birthplace of the goddess of love Aphrodite nearly three millennia ago, Cyprus was known around the Mediterranean for its perfumes, scents that the mighty queens of Egypt coveted.

What appears to have distinguished the Cypriot fragrances was the quality of the rich olive oil in which the ancient perfumers captured the musky scent of indigenous oak moss, citrusy bergamot and labdanum or rockrose. This was done through a distillation process using clay vases of exacting dimensions.

"Perfume is the symbol of life," said Maria Rosaria Belgiorno, a retired professor with Italy's National Council for Research, whose own archaeological digs on the east Mediterranean island 15 years ago unearthed the oldest perfumery of the Bronze Age. Perfumes hide the smell of the dead and of decay. They, according to Belgiorno, have a "spiritual connection" to life.

And that connection is one of the motivations behind a new perfume theme park nestled in Cyprus' verdant Solea valley, which allows visitors to recreate those ancient perfumes in the traditional way, with replicas of the ancient clay distillers extracting the scents from the locally grown herbs over an open fire.

Belgiorno says evidence to the popularity of Cyprus' fragrances is found in a reference to a Cypriot perfume merchant inscribed on 4,000 year-old tablets found in the ancient Greek city of Thebes. That reference pre-dates the emergence of the deity Aphrodite, meaning Cyprus was famous for its perfumes before it gave birth to the ancients' love goddess.

The origins of perfume-making are believed to date back to 5,000 BC in ancient Mesopotamia, where archaeological digs in the early 20th century near the city of Mosul in modern-day Iraq turned up the first evidence of such activity. From there, perfume-making migrated to Anatolia and then to the Mediterranean and beyond, with perfumeries discovered in such diverse places as Sardinia and Slovakia.

It was a long journey to perfume's modern spiritual home in France. For thousands of years, Cypriots, from the highest echelons of nobility to the average commoner, produced and used perfumes. The popularity of those fragrances carried through the ancient Egyptians to the Templars, medieval Venetian merchants and up to the present.

Early on in the last century, famed French perfumer Francois Coty created the perfume Chypre, French for Cyprus, which is one of the seven main perfume groups and the only one that bears the name of a place. The Italian Research National Council, along with Belgiorno, has teamed up with the Lazarou family that runs a successful herbal business to build the park, which rests on a parcel of the family's farmland near the village of Korakou.

The park puts on display a range of working replicas including those from the earliest known perfumery in the Mesopotamian Tepe Gawra settlement, from the Minoan era on Crete, of Minotaur fame and of course from Cyprus. Distillers hailing from different areas vary, but are identical in their simplicity and ingenuity.

The herbs boil at the bottom with the steam rising to the domed top where it condenses into a liquid that flows through a bamboo reed into vases. The design has proven so successful that distillers identical to those found in Tepe Gawra are now producing rose water in Iran, said Belgiorno.

Although the perfume park was inaugurated late last year and is still a work in progress, word is spreading. A group of University of Cyprus archaeology students led by the university's archaeological research unit head Vasiliki Kassianidou visited the park for a hands-on demonstration on ancient distillation techniques.

Even a new luxury hotel in Cyprus' southern coastal resort town of Limassol will encourage guests to visit the park for a unique experience. "We wanted to show future generations how their ancestors produced fragrances and used herbs for food as well as for medicine," said Yiannoula Lazarou, on whose property the park is built.