A gem of Dastangoi, a voice lost too early

The Delhi based artiste, was known for his performances of narratives in the centuries-old form of storytelling. 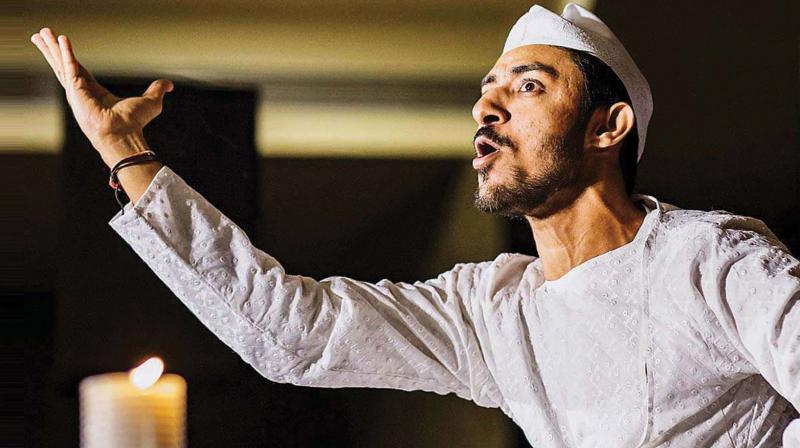 A 13th-century oral storytelling art, Dastangoi, has lost one of its leading exponent, Ankit Chadha on May 9. The Delhi based artiste, was well-known for his performances of narratives in the centuries-old form of storytelling.

A 13th-century oral storytelling art, Dastangoi, has lost one of its leading exponent, 30-year-old Ankit Chadha, on May 9. The writer and the storyteller, in a tragic accident, drowned in a lake near Pune. The Delhi based artiste, was known for his performances of narratives in the centuries-old form of storytelling. His performances both in India and abroad consisted of a wide range of topics- from Kabir to Majaaz and from pastoralism to stories for children.

Ankit, who recently had returned from his US tour, which included his performances at Harvard and Yale Universities, had authored the book ‘Amir Khusro- The Man in Riddles’ and co-authored the book ‘My Gandhi Story’ with Nina Sabnani. Ankit was also a recipient of the Sabarmati fellowship in 2017, and transformed the art of dastangoi to make it a musical dastan (story). But, many a time Ankit would get so immersed in his art that even in some of his non-musical dastans (stories), he would burst into songs.

Ankit learned the art of Dastangoi from his guru Mohmood Farooqi, who expresses that Ankit was one of the finest students he had taught in the past 10 years. He further says,  “Ankit had both performing and writing skills, which is a very rare combination. He was a very engaging performer, which emerged from his sincerity towards the artform and the openness of his heart. He was also spectacular in performing for children. Ankit is an irreparable loss for dastangoi and overall a big loss for Indian performing arts in general.”

On the sudden death of Ankit, a very close friend of Ankit and the author of book Ishq mein mati son,  Girindranath Jha says, “There was an intimate friendship between both of us. It was his recital of Kabir’s dohas, which took me closer to him. His voice, his knowledge of history and his understanding of music distinguished him from the crowd.” He further says, “ Dastangoi ki samridh parampara ko Ankit ne jeewan diya tha. (It was Ankit who gave life to the rich tradition of Dastangoi.) Ankit ka aandaz-e-bayan hi aab hamare pas hai. (Now, we only have the stories of Ankit with us).”

Mostly Dastangoi is performed in a pair but Ankit often used to perform alone on the stage. Dressed in a full-length white kurta, Ankit used to have a childish innocence on his face while he performed. He used to immerse the audience completely into his stories with his magical personality and his amazing storytelling abilities.

Ian Woolford, lecturer of Hindi language and literature at La Trobe University, Australia, finds it difficult to believe that the storyteller is no longer with us. He says, “Ankit was a brilliant storyteller and a sweet friend. Anyone who saw him perform will treasure those memories because he had such an unusual talent. My heart goes out to his friends and family during this difficult time.”

Vineet Kumar, a professor at Delhi University and a media critique expresses his deep regards on the storyteller’s death. He says, “Ankit had a very good command over the languages — be it Hindi, English or Urdu.  Ankit Chadha was a mirror of how one should use languages to their purest form. He had tehzeeb in his language. For me, Ankit was bigger then Dastangoi, with no disrespect to the art.” Furthermore, he says, “With this loss of, India has lost a gem from its cultural capital.”

Ankit was charismatic during his performances at different schools and colleges. So, he was very popular among the students. One of the students, Basyukta Basuprava shares her experience of attending the dastangoi session at her college. She says, “I am appalled at the sudden loss of such a young and talented artist who connected this generation with the dying art of storytelling. It was during our annual college fest that I met him. I remember the evening before his performance; there was a mushaira where he recited some of his favourite works by Mirza Galib and Kabir. I had an interest in writing poetry but that evening he inspired me in a true sense and changed the way I used to perceive poetry. And the next day when I watched him perform, I fell short of words to describe how captivating it was.”

Another student Shreyas Aatman, who was very closely associated with Ankit Chadha for one of his events, says, “I wasn’t able to believe the fact that such a pure soul left the world. I am really saddened to hear such news. My prayers are with his family and friends.”

Now he is no more with us. We won’t hear his voice saying ‘Toh hazreen, hua yun…’. This was how Ankit used to start all his dastans (stories). Though he is not with us but we would cherish his stories for a long time. Ankit, by his recitals of dastans of Kabir and Gandhi also played a crucial role in sending Kabir and Gandhi’s messages to the mass. He used to spread their messages of peace, harmony, and inclusiveness.