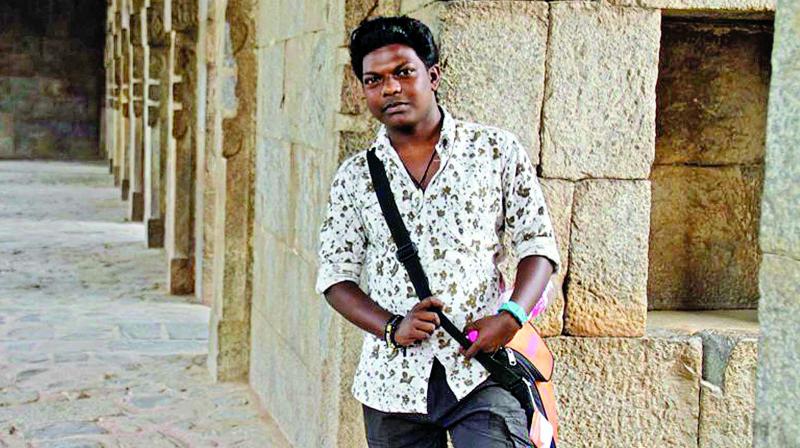 When 25-year-old Aswathi Rajappan walked in to file nomination papers as an independent candidate for the upcoming Lok Sabha elections from Ernakulam constituency, before the District Collector, history was scripted.

When 25-year-old Aswathi Rajappan walked in to file nomination papers as an independent candidate for the upcoming Lok Sabha elections from Ernakulam constituency, before the District Collector, history was scripted. Aswathi, or Chinju Aswathi as she is fondly known, thus became the first openly intersex and probably the youngest candidate to contest the General Elections from not only Kerala, but as the claims go, from the country. It is another feather in the cap of the State that became the first to announce and implement a transgender policy and launch various support initiatives for the community.

Contesting the elections was not an impetuous decision for Aswathi, but something ze (the pronoun Aswathi prefers)  had decided long back. “I wanted the voice of the intersex community to be heard loud and clear. Right from the time I came out as an intersex individual in 2016, I have been vociferous over working for the rights of the community. The transgender policy of the State was a shot in the arm for the community, but there is a long way to go for acceptance in society. This election is very crucial in the sense that I have this huge platform and space to express my views – political and others – and draw attention to my community! It is the reason why I decided to contest the elections as an independent candidate.”

Aswathi candidly reveals that ze was not very confident to start off with, but slowly gained strength thanks to the support ze received from the community, society and the media. “I did not receive any objection for my nomination which itself is a huge indicator of the support. I am a representative of the common man and want to focus on problems faced by sexual minorities, Dalits, workers in the unorganised sector, differently-abled people, Adivasis, women and men,” ze says.

The initial fund – a sum of Rs 40,000 – for the campaign was managed through public and online fundraisers. Aswathi’s electoral symbol is a laptop and there is a reason why ze decided on that. “Many people are still dreaming of a revolution, but as an Electronics graduate and an MSc Applied Electronics dropout, what I believe is that the revolution is going on in the electronics and digital world, which is why every common man now boasts of a smartphone. This is also why I believe the common man will vote for me,” ze expresses hope.

A native of Angamaly, Aswathi talks of her poll manifesto which ze says is a pure, Ambedkarist, Dalit way of thought. “Unlike other party manifestos, we are aiming at a total change at the infrastructure level. In a city which has grown rapidly and even have its own metro system, why are colonies and slums still thriving? The education system, too, is flawed what with only the rich getting access to good education and thereby good jobs and an elevated place in society. There are still marginalised sectors and my fight is for those minorities. I have received the support of a lot of minority groups including huge support from the queer community,” ze says.

Aswathi traces her activism to her Dalit activist parents. “I grew up around discussions of Dalit politics and Dalit movements. I had always been known as a Dalit activist before coming out as an intersex individual. There are a lot of challenges that an intersex person faces – beginning right from the time they are in the womb. Any sign of an ambiguity about the sex of the unborn child leads to the foetus being aborted. This needs to be stopped by taking lawful and legal recourses.”

Aswathi states that the term intersex is a broad umbrella term with 30 different intersex conditions. Ze ends by stating that education needs to be imparted on the differences between gender, sex and sexuality. Finishing schools, Aswathi believes, is the answer to that.