Views from the sixties

DAG’s latest exhibition brings the diversity of Modernism art movement from the 1960s under one roof. 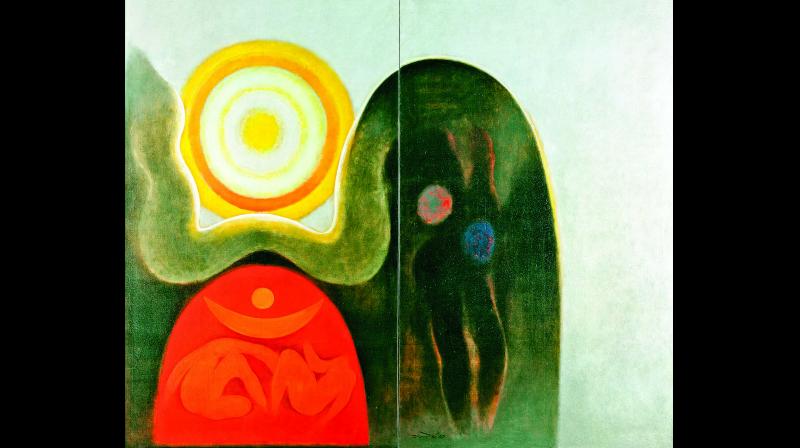 In the second decade of the newly carved Independent India, the citizens of the newfound nation were still grappling with the realities and the consequences of the seismic event. While the world-over, people were breaking free from the status quo, especially when the two World Wars had crippled the collective rationality, India was staring at the issue of nation-building. This transition of the 1960s – from a colonial hangover to nationhood – naturally seeped into the art movement of the time, when the different cluster of Modernists began to reflect the age in their work.

Hence, bringing the diversity of art movements of the 1960s under a roof, DAG Mumbai has opened its latest exhibition The Sixties Show to give its audience an understanding of the Indian Modern art. “By focussing on a period of a decade, we are facing the framework of socio-political activities within India and the world. And how they have perhaps impacted the art scene in India at the time. It’s just another layer of reading Modernism, and we are trying to offer multiple perspectives of the movement,” delineates Jagroop Mehta, Vice president, and Director at DAG.

In the 70 works on display, the show inspires a flow from the Bombay Progressive Artists Group, with the works of F.N. Souza and M.F Husain among others, to Group 1890, with the works of Ambadas and Jyoti Bhatt, among others. Moving forward, the works of India’s folk modernists such as Jamini Roy and Madhvi Parekh to the High Modernists such as Bikash Bhattacharya, Shanti Dave, George Keyt, G. R. Santosh, and Anupam Sud are all adorning the walls of the gallery currently.

At a time when the Progressives were viewed as the establishment, a growing sense of nationhood among the Group 1890 pushed the artists to seek inspiration from within the sub-continent. “The Progressive largely travelled a lot, and were engaging in more of global discourse, so they are taking from the rest of the world, while Group 1890 looked for more indigenous narratives,” reveals Mehta, adding that a growing sense of confidence resulting in more abstraction and experimentation in their works is a common thread among the Modernists.

In High Modernists, one can see a critique of the socio-political developments. Giving an illustration, Mehta says, “After the Partition, a lot of the cotton-growing land had gone to the other regions. So the agriculture lands were now being used for cotton growing instead, which further added to the food shortage in the country. In this exhibition, we have Somnath Hore talking about that,” says Mehta. Additionally, Anupam Sud’s artwork on germination talks about a sense of growing in this pain.

Among some of the most celebrated names in Indian art history, the vast collection has one painting that Mehta calls a key work of the age. A painting from 1969 by G. R. Santosh, which is anchoring the gallery floor, has managed to capture the excitement of the age. “It is a very interesting painting because at this stage Santosh had just begun to develop that neo-tantric language that later became so iconic. It is a transitional moment where he is moving from the landscape towards experimenting, and you can see that he is growing towards what he is developing a neo-tantric artform,” elaborates Mehta.

The exhibition is ongoing at the gallery in Kala Ghoda till March 28.