‘Jallikattu is more than just a tradition’

It is something their family and ancestors have a strong connect with. 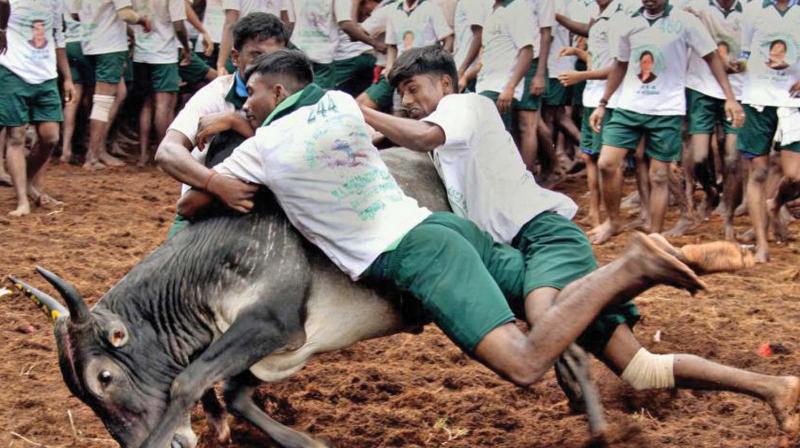 Mechanical engineer Navaneethan Muthurathinam believes the ban has also resulted in many youngsters actively coming out in support of jallikattu.

Though everyone might not be totally aware of what jallikattu and its practice actually is — debates over whether the ban should be lifted or not have occupied centre-stage all over social media! With many actors, celebrities and sketch groups online vocally supporting the traditional Tamil sport, awarenss among Gen-Y is probably at an all-time high. But how many of these keyboard warriors take their beliefs out into the real world?

For quite a few techies and engineers, supporting the sport is about more than just tradition — it is something their family and ancestors have a strong connect with.

Manikandan, a techie, says, “I am currently a technology evangelist,  but my blood routes to Silukanaickenpatti, a remote village where we’ve practised agriculture for hundreds of years. I have seen the evolution and extinction of native breeds of cows, birds and dogs. The link of bio-cultural sports and agriculture is inevitable. One such science-cum-tradition is our jallikattu.”

On how jallikattu would benefit him, he says, “From a farmer’s perspective, the native cow is raised for A2-milk purpose and the dung plays a vital role in preserving the soil’s health. Not every farmer can preserve bulls, as they are aggressive by nature. Hence, fellow farmers get bulls from us and preserve them for events. But, this link is lost due to the ban. For many farmers it not economically feasible to raise all the male calves, and now they are being pushed to selling them to merchants, from where they may end up at slaughter houses.”

Speaking about initiatives in which he has played a part, Manikandan says, “Opinions from villagers are easily ignored, as they are branded illiterate. So, a few youngsters like myself got together with The Biodiversity Conservation Council of India (BiCCI), and addressed the city and put across the facts and misconceptions about the sport.”

Mechanical engineer Navaneethan Muthurathinam believes the ban has also resulted in many youngsters actively coming out in support of jallikattu. “We held several campaigns at Marina and took part in the most recent one organised by Care and Welfare. What was surprising was that people from Chennai actively took part and although few didn’t know much about the sport, they were willing to listen — that’s what we wanted.”

Sharing with us his knowledge about the sport, Navaneethan says, “The main concept of the event is to see which bull is the strongest so they can be used for breeding. I’m from Dharapuram in Tirupur, and we raise cows in our house. But, the number of people who own cows and bulls in our town has lessened significantly. It also severely affects our economy — the cows which used to be worth Rs 40,000 to Rs 50,000, now go for a meager  Rs 12,000 to Rs 15,000! It’s very essential for youngsters working in cities to take the issue in their hands, so that we can get a wider reach.”

Ashwin Kumar Ramasubbu, a software engineer, currently working in Mumbai, created awareness about jallikattu during his trek in Leh. The youngster, who claims to have witnessed the traditional sport right from his childhood, says, “It’s not just about what happens during the event, I also know what goes on behind the scenes. People have to understand that raising bulls is not akin to raising pets! Bulls become a part of their life and people use their living expenses to make sure their animal is doing well. I’m not saying jallikattu, over the course of history, has been flawless. There have been one or two occasions when a few people breached the rules — but only these instances have been spoken about again and again.”

He adds, “I started to create awareness about the sport. I wrote about the process of the sport on social media and while I was trekking, I also spread word about it in the north. I’ve also been in touch with various associations and have been getting constant updates from them.”