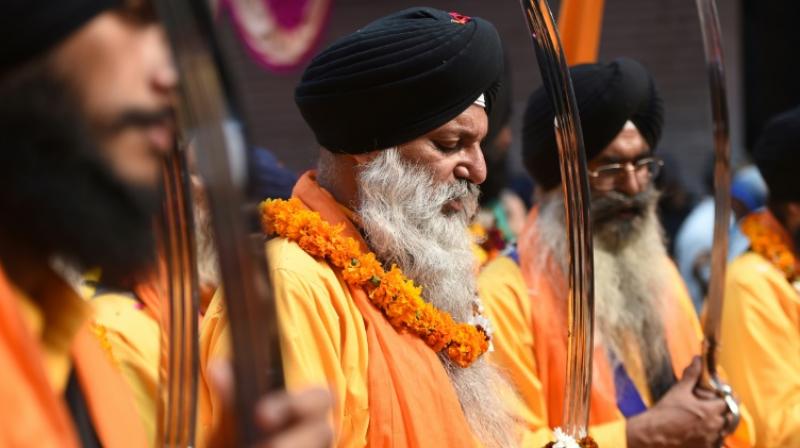 Sikhism is a monotheistic religion born in the 15th-century in Punjab. (Photo: AFP)

New Delhi: It is one of the biggest birthday celebrations in the world: millions of Sikhs will Tuesday mark the 550th birth anniversary of the founder of their religion, the Guru Nanak. The annual celebration has been given extra significance this year with the opening of the Kartarpur Corridor, a secure, visa-free passage between arch-rivals India and Pakistan that gives Indian Sikhs access to the place where the guru died in 1539, now one of the religion's holiest sites.

Here are some more facts about Sikhs on the anniversary.

Sikhism is a monotheistic religion born in the 15th-century in Punjab –- meaning the land of five rivers, a region spanning parts of what is now India and Pakistan. Five and a half centuries later, Sikhs number up to 30 million worldwide, with a rich diaspora in places such as Canada, the US and Europe -- although the vast majority remain in India.

Once rulers of the Punjab, they were considered a martial race by the British colonisers. Men, in particular, are instantly recognisable by their colourful turbans, used to cover their hair, which they must leave uncut.

That is one of the five articles of their faith they must carry all the time, known as the Five Ks: the Kesh (uncut hair), Kara (a steel bracelet), Kanga (a wooden comb), Kaccha (cotton underwear), and Kirpan (a curved dagger). Sikhs worship God, known to them as Waheguru, or "wonderful teacher", inside gurdwaras, or "doorways to God". The word "Sikh" means the "seeker", or the "learner". Male Sikhs bear the name "Singh", which means lion; while women go by "Kaur", or princess.

Who was Guru Nanak?

Guru Nanak was born in 1469 to a Hindu family at Nankana Sahib, a Pakistani city about 80 kilometres (50 miles) from the eastern city of Lahore. Some legends say there were signs of divinity around him from the start, such as the time a cobra was found rearing over his head -- not to attack him, but to shade him from the sun as he napped.

As he grew older the Guru began travelling, preaching a faith based on equality and one God. He died in 1539 in the Punjabi town of Kartarpur, in modern-day Pakistan, where his remains are buried. Nine gurus followed Guru Nanak and there is no living human successor, but the Guru Granth Sahib -- the Sikh holy book -- is considered the 11th and eternal.

What happens on his birthday?

Sikhs around the world, but especially on the subcontinent, will come together to sing, pray, eat and hold sprawling processions to different gurdwaras. Some of the biggest celebrations will be the site of their one of their holiest shrines, the Golden Temple in Amritsar, India. In Pakistan, thousands of Sikhs are expected to mark the occasion at Nankana Sahib and Kartarpur.

Why is this year special?

Apart from it being the 550th anniversary, this year also saw the opening of the Kartarpur Corridor -- a secure land link allowing Indian Sikhs to visit the gurdwara in the Pakistani town where the Guru died. The gurdwara at Kartarpur is so close to the India-Pakistan frontier that its white dome and four cupolas can be seen from across the border.

But the perennial enmity between the South Asian nations, arch-enemies since Pakistan was carved out of colonial India at independence from Britain in 1947, has meant that for decades Indians could not visit -- at least, not easily. Many had likened it to Muslims being able to see Mecca or Medina, but never actually able to visit.

India has long been asking for Sikhs to be given access to Kartarpur, and last weekend their wish was finally granted with the opening of the corridor just days ahead of the birthday celebrations.